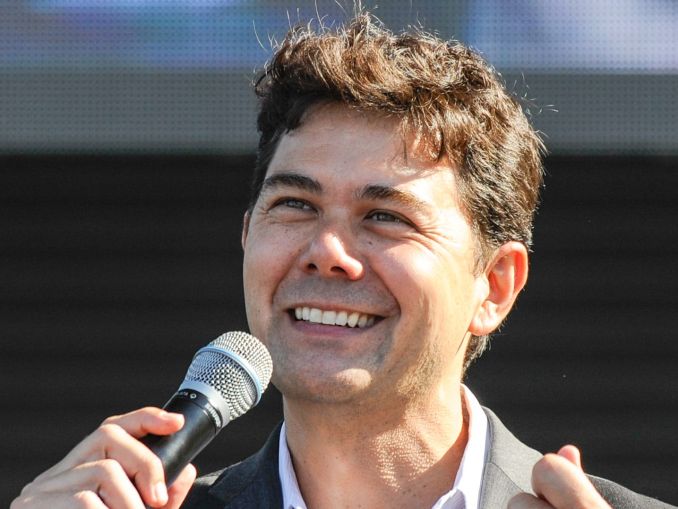 Come January, Ken Russell will complete two terms as a Miami city commissioner. But though he’ll transition back to the private sector, he’s not quite letting go of his public-facing job entirely.

Russell, a small-business owner who ran for Congress in the Democratic primary earlier this year, started his political career because of a contaminated park near his home. That introduced him to the world of local government. First elected as city commissioner in 2014, Russel has been active on environmental issues in Miami since, including passing a $400 million bond to address resilience and an ordinance that will require large commercial buildings to track and report their energy efficiency.

He has also been involved in the Army Corps of Engineers’ $8 billion project to protect Miami from storm surge, and in the creation of several special districts known as Community Redevelopment Agencies that have some autonomy on development and planning.

That experience will be useful as Russell embarks on this next journey.

The following remarks have been edited for clarity and length.

Commercial Observer: Congratulations on your new gig. Can you start by describing your role at Longevity?

I wear two hats at Longevity. One is on the private sector development for the Southeast U.S. So pretty much from here up to the Carolinas. Any private development that’s interested in ESG, carbon neutral, net-zero consulting, strategy, anything around making their developments more environmental or their company strategies more environmental, I’ll be looking to sign on those clients for Longevity Partners.

The other hat I wear is a public sector engagement role, which Longevity hasn’t had before. They were originally talking to me about private development consulting. I’m coming from the public sector; however, when you’re in the public sector in Miami, you’re involved in development —  it’s just the way the market works. So I’ve learned a lot over the last seven years about how development is functioning in Miami, what ‘s needed to get things from start to finish. But, also and more importantly, it’s the crises we’re facing from the environmental perspective and how South Florida is just, it’s the tip of the spear on these resilience issues with storm surge, sea level rise, even the affordability crisis — just all these resilient issues, Miami is ground zero.

I wish my departments had more help from the outside with the latest education and tools that we don’t have as a bureaucratic city. So we would be happy to third party with a firm that would help us implement these sorts of goals. So, as I’m leaving office, this is where I found the opportunity.

You’ve worked with real estate developers on the public side of the equation. How do you plan to reach out and see things from the perspective of private developers?

Yeah, I’m still on the outside trying to help. There’s a pretty heavy bureaucracy in local governments that makes it difficult to get through the process and navigate. So I’ve always felt that part of my job as an elected official is to help my constituents and stakeholders navigate those processes, whether it’s a single-family home and someone’s trying to put on a garage, or, you know, a 600-unit tower. It’s about  helping them put the dots together. I’m still approaching them with that same mindset of “How can I help you?” but it’s just achieving some different goals rather than permitting entitlements. It’s more about efficiencies and environmentalism.

Over your two terms, what would you say was your biggest success and biggest regret when it comes to resilience issues facing Miami?

The biggest success was the passage of the Miami Forever Bond [a $400 million bond approved by voters to make the city more resilient to climate change]. The most frustrating thing has been watching how that bond gets spent. The most optimal and efficient way to detail that money and leverage that money would be to use matching funds from the state and federal government to take on really big projects; $400 million could be gone in the blink of an eye on major projects, and it wasn’t easy to pass. We passed that in 2017, and only the first tranche of that bond has been spent.

ESG is a particular financial framework that incorporates a number of different metrics, but these days it’s used more as shorthand for decarbonization and climate-related issues as a whole, particularly within real estate. Do you find that to be the case?

The climate crisis kept popping up as a broader, longer-term issue that we needed to address. So, in the city of Miami, we declared a climate emergency. We were one of the first few cities to do that, which allowed us to bypass certain things and prioritize the issue. We then set carbon-neutral goals to address the crisis. And, then, most importantly, I passed an ordinance that we call the benchmarking and retuning ordinance, and this is specifically for climate change and carbon footprints. Starting next year, there will be 1,000 towers in Miami that have to measure their use of electricity and water, measure their efficiency per square foot using an Energy Star tool. Then every few years they have to invest in improving that score. No city in Florida has ever done that. Orlando passed a benchmarking ordinance, but not the retuning.

So, where Longevity comes in is now that I put on this new hat, I can help the private side comply with an ordinance like this. But, also wearing the public engagement hat, I can help other cities pass legislation like this.

How have the recent examples of hurricanes Ian and Nicole changed people’s thinking and attitudes around resilience and development?

With Hurricane Ian on the West Coast — 15-foot storm surge — it showed us there’s not one city in all of Florida, much less the East Coast, that is fully prepared for a 15-foot storm surge. And that’s something I’ve been trudging through and pushing uphill for the last seven years in office and working with the Army Corps, specifically to be ready for a 15- to 18-foot storm surge.

The Army Corps of Engineers did a three-year study to assess the risk to Miami financially, specifically to our downtown core. And they found that a 15-foot storm surge would do about $40 billion in damage. And then the Army Corps came up with this concept of a 20-foot concrete wall encasing all of Miami and, of course, the elected leadership and the residents said “No, no thanks. You’re actually going to diminish our built value with this giant concrete wall. Give us something better.” We can come up with a green-gray hybrid infrastructure that meets the needs of the community, quality of life, access to the waterfront, etc., but still gives us storm surge protection.

Given Miami’s population and development boom the last few years, what are some of the new challenges that that’s added to Miami’s resilience?

When I came into office, I also became the chairman of the Downtown Development Authority, which is a development authority for Miami’s core. And the titans of development are there around the board table discussing how to get Miami ready for these surges in development that will build out our city and meet the demand for real estate. My initial take back then was we need to address climate change, storm surge and sea level rise — and I was initially shut down, I was balked at by the board. They were really worried that if we put this at the forefront and discuss it, we’re actually going to scare off development and disincentivize people from investing in Miami by amplifying the exposure we have to storm surge and sea level rise and climate change.

I convinced them otherwise — that if we don’t invest in fixing these issues, and mitigating these issues, we won’t be insurable in the coming cycle. And, thankfully, we were a little bit ahead of the curve, because now, with ESG scoring, you really can’t even consider financing, investing and developing unless you have a good grasp of these issues and are tackling them head on. So, rather than showing that we were putting our head in the sand and hiding from the issues, we’re showing that we’re at the forefront of solving them. And every time we would raise a seawall, for example, or force a developer to raise their seawall as they develop, it would change the insurance rates for that entire neighborhood.

Do you have an example of that?

Yes. It’s quite timely, actually. So Ken Griffin is bringing Citadel to Miami. The property that they acquired [1201 Brickell Bay Drive] was from Tibor Hollo’s company FECR. Jerry Hollo served on the development authority as they held that empty property; almost a decade ago it was just a surface parking lot on the waterfront in Brickell. Before we even changed our ordinance for our sea walls, they raised their seawalls to the new level. And we didn’t actually expect it but it actually changed the flood plain map for that section of Brickell, which made the entire neighborhood’s insurance rates go down. And, so, when Ken Griffin and Citadel came in and acquired the property, the seawall had already been built, which they’re now benefiting from as they go into initial plans on their design. They don’t have to worry about the storm surge element.

How did you get into politics to begin with?

Eight years ago, I was a surfboard salesman. I was a kitesurfing instructor. And I just got upset about a contaminated park in front of my house [Merrie Christmas Park]. I didn’t even know who my commissioner was at the time. And that just led me down this rabbit hole of environmental concern and advocacy. I organized my neighborhood, and I learned the politics. I got them to clean up the park correctly. And then I found there were six other contaminated parks in Miami, so I ran for office. And that was just the rabbit hole that let me put all the dots together between development and the environment — because my district was Coconut Grove, Brickell, Downtown, Edgewater, probably 80 percent of the city’s revenue in terms of development. And so I had to learn this really, really fast, but I always kept my environmental hat on to see how we could keep Miami profitable but make it more resilient.