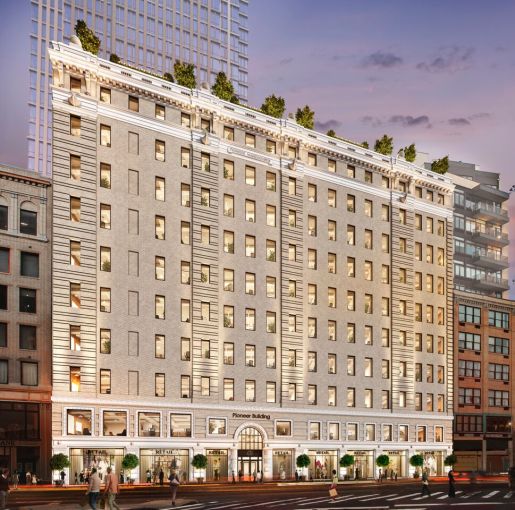 The company signed a deal for 8,592 square feet on the fifth floor of the building, which is owned by Quinlan Development Group and Building and Land Technology, according to landlord brokers Cushman & Wakefield. Merit Hill originally took 4,220 square feet in the property in 2018, and the new deal brings its footprint to 12,812 square feet.

C&W declined to disclose the length of the lease but said the asking rent was in the $50s per square foot.

In addition to Merit Hill’s expansion, Wells Fargo renewed its 4,604-square-foot office on the third floor, according to C&W.

“Ownership has done a fantastic job providing tenants with top-tier amenities for an innovative and flexible workspace,” Ron Lo Russo of C&W, who repped the landlord alongside Remy Liebersohn and Pierce Hance, said in a statement. “Both tenants will benefit from the building’s highly accessible location in the heart of Downtown Brooklyn within walking distance to numerous subway lines.”

CBRE’s Joseph Cirone also brokered the deals for the landlord, while Merit Hill had in-house representation. Cirone declined to comment.

Wells Fargo was represented by Sheena Gohil at Colliers and Bill O’Brien at M.C. O’Brien.

While leasing has seen better days across Manhattan — with activity dropping 40 percent from September to October — Brooklyn probably had equally unimpressive numbers in terms of square footage leased, according to a report from Colliers.

In the third quarter, Brooklyn only saw about 256,132 square feet of leasing activity, a 30 percent drop from the 380,571 square feet leased the previous quarter, according to Colliers.

Downtown Brooklyn’s leasing activity in the third quarter was propped up by three leases, according to Colliers. In the first two, the U.S. General Services Administration took 18,857 square feet at 100 Myrtle Avenue and 14,507 square feet at 1 Willoughby Square. The third was Baltic Street AEH signing on for 14,1000 square feet at 9 Bond Street.