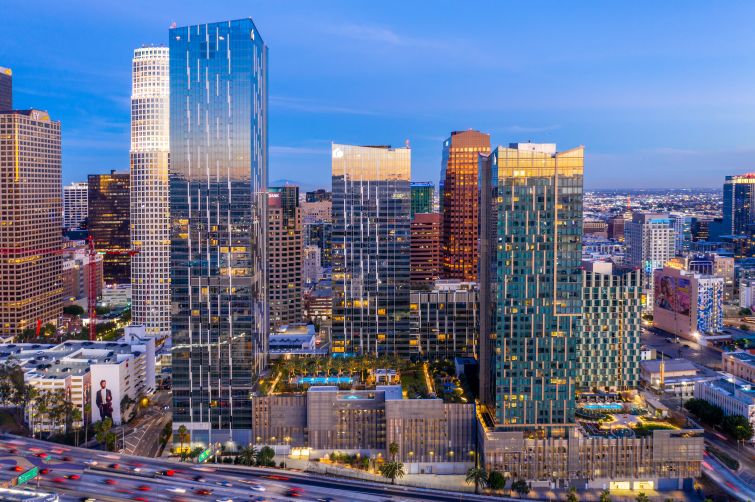 Northland’s first move in California is a big one.

The private equity firm announced today that it acquired THEA at Metropolis, a 59-story luxury multifamily tower in Downtown Los Angeles for $504 million. It’s one of the largest single-asset market-rate multifamily acquisitions in U.S. history, the buyer said. It was sold by the U.S. subsidiary of China’s Greenland Holdings Group.

The 685-unit property at 1000 West Eighth Street was completed in 2020 as condominiums before being converted to apartments after construction, and it is currently 91 percent occupied.

“In THEA, Northland secured an extraordinary opportunity to acquire the highest-quality luxury apartment tower in the United States at a steeply discounted price,” Matthew Gottesdiener, CEO of Northland, said in a statement. “Northland believes fervently in the enduring appeal of California and a vibrant future for Los Angeles, and we are encouraged to find these are contrarian opinions well compensated in the market today.”

The purchase price values the multifamily units (which make up 97 percent of total) at $714,000 per unit and $688 per square foot, a 40 to 45 percent discount to today’s replacement costs, Northland said. The firm financed the purchase with 10-year, fixed-rate debt.

The units at THEA average 1,038 square feet. It also features a 1.5-acre podium amenity deck with a resort-style pool, cabanas, a catering kitchen, a rooftop dog park, a garden and a playground. The eight penthouse units on the top two floors average 3,052 square feet. The property also includes 30,000 square feet of ground-floor retail.

THEA is part of a master-planned mixed-use community that spans 6.3 acres called the Metropolis, about two blocks away from LA LIVE, a 5.6 million-square-foot sports and entertainment complex that encompasses Crypto.com Arena (formerly known as Staples Center), Microsoft Theater, and numerous restaurants and bars.

The majority of the equity invested in THEA came from Northland’s $178 million sale of Hilands, a 826-unit property in Tuscon that the firm acquired for $21 million in two purchases in 1992 and 1997.

“Over the past decade, Northland has grown from a Class B suburban garden apartment investor with concentrated exposure in Austin, Florida and New England, to a national owner, operator and developer, with one of the highest-quality diversified multifamily portfolios across now 16 states,” Gottesdiener said.

CORRECTION: A previous version of this article included an incorrect sales price.