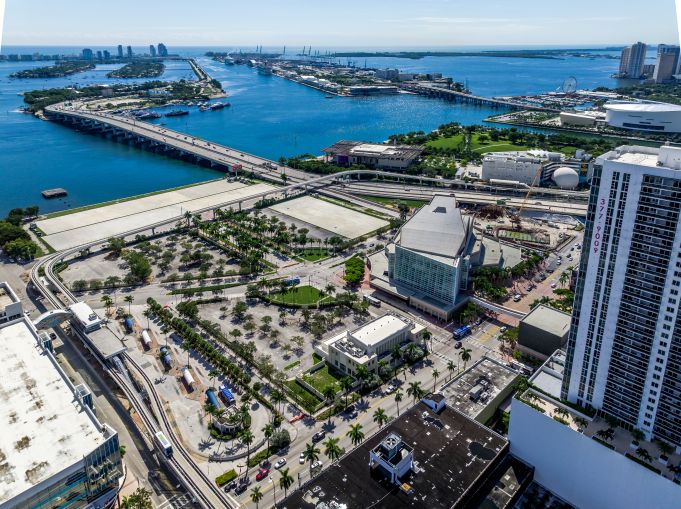 Malaysian casino operator Genting Group is looking to sell a prime waterfront parcel in central Miami for over $1 billion.

The 15.5-acre site offers 800 linear feet of direct frontage on Biscayne Bay. It’s located at 1431 N Bayshore Drive, just east of the Adrienne Arsht Center for the Performing Arts, between the MacArthur and Venetian causeways that lead to Miami Beach.

Genting Group paid $235 million for the land, which includes a bus and Metromover station, in 2011. The land also held the headquarters of the Miami Herald, which Genting has since demolished. The gambling company planned to build a $3 billion complex, but the project never got underway.

Aside from the public transit stops, the parcel today remains mostly vacant, occasionally hosting events such as the Context Art Miami fair happening this week. It’s zoned for properties up to 36 stories tall of any use, according to property records.

But the brokers tapped to handle the sale on Genting’s behalf — Avison Young’s Michael T. Fay, John K. Crotty, David Duckworth and Brian C. de la Fé — say the property has unlimited buildable square footage since it’s in a Metromover subzone, but it is restricted by a height limit of 649 feet stipulated by Federal Aviation Administration regulations.

While there is no official asking price, Genting Group expects the property to sell for over $1 billion, said a spokesperson for Avison Young — a price that would set a record for land sales in Miami, at least in gross terms. Land prices in Miami have ballooned since the pandemic as developers rush to meet demand from companies and wealthy Northerners relocating to the Magic City.

In July, financial company Citadel paid $363 million for a 2.2-acre waterfront parcel in Brickell, where it’s developing its headquarters. The Citadel trade equated to about $145 million per acre, while Genting’s — if sold for $1 billion — would translate to $64.5 million per acre.

The gambling company plans to keep ownership of the Omni Center, just north of the parcel on sale. The 10-acre property, which Genting bought for $160 million in a separate 2011 deal, contains a Hilton hotel, offices and a parking lot.

Genting hinted it may redevelop the Omni Center or install a casino in it. “With our focus now locked in on 10 acres of prime real estate, we look forward to accelerating the process of outlining a project, putting shovels in the ground and getting a project built that all South Floridians can be proud of,” Robert DeSalvio, president of Genting Americas East, said in a statement.