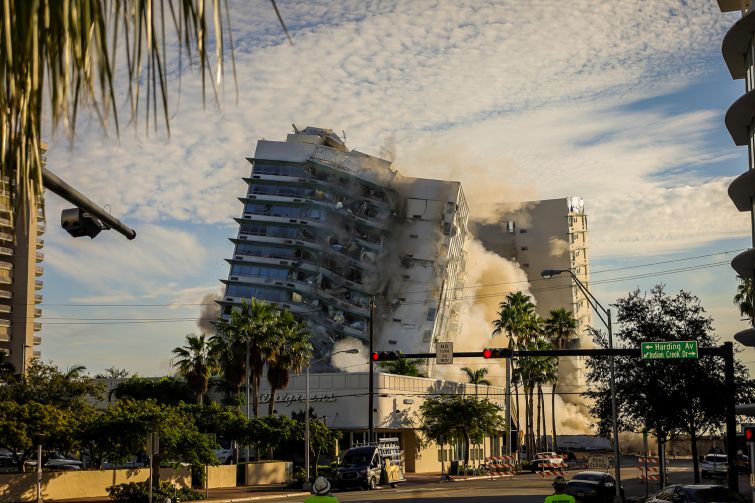 The decaying hotel, Miami Beach’s historic Deauville Beach Resort, which once hosted everyone from the Beatles to President John F. Kennedy, was imploded Sunday morning, November 13, 2022, after it was declared an unsafe structure. Hundreds of people came out to see the building come crashing to the ground. Photo: Zak Bennett for Commercial Observer

Miami Beach’s historic Deauville Beach Resort, once the site of The Beatles’ iconic performance on “The Ed Sullivan Show” in 1964, is now officially nowhere, man.

The MiMo-style building, long in disrepair, was demolished Sunday, just days after a ballot proposal that would allow for its redevelopment was rejected by voters.

The 17-story property, built in 1957, has remained closed since an electrical fire in 2017, which launched a bitter legal fight. Preservationists, including the Miami Design Preservation League, have accused the Meruelo family, the Deauville’s owners, of letting the hotel decay on purpose, in hopes of tearing it down and building something new or selling the site to a developer.

In 2019, the Miami Beach government sued the Meruelos — who bought the Deauville for $4 million in 2004, per records — to maintain the 595,788-square-foot resort, as required for historically protected buildings. (The Meruelos could not be reached for comment.)

Despite the legal proceedings, a Miami Beach official ordered the hotel to be knocked down in January, deeming the building structurally unsafe. The Miami-Dade Board of Rules and Appeals later upheld the order.

The future of the now-vacant site, which spans 3.8 acres, remains unclear. Related Companies chairman and founder Stephen Ross was in the process of buying the property — on condition he could redevelop it.

The New York-based developer, one of the country’s most prominent, had proposed building an Equinox-branded complex with two luxury towers, featuring 125 condos and 175 hotel rooms — designed by world-renowned architect Frank Gehry. For Ross, who partly grew up in Miami Beach and now owns the Miami Dolphins NFL team, the development was a passion project.

Miami Beach Commissioners put his plans — namely the developer’s bid to hike the tower’s height to 375 feet, nearly twice the current zoning allowance of 200 feet — on the ballot. But last Tuesday voters rejected the proposal.

Since the vote, Ross has not clarified his intention for the property. When reached for comment Wednesday, Ross and Related representatives provided a statement from Yes For A Safe and Strong Future, the political action committee tied to Related, which lobbied in favor of the development.

“While we are disappointed with the outcome, we know North Beach deserves an economic engine, not an eyesore. We appreciate the tremendous support we received from thousands who backed a real vision for a better North Beach and still believe there’s a brighter future ahead,” the statement reads.

If Ross were to withdraw his offer, the parcel will remain a highly valuable proposition to other developers. Located at 6701 Collins Avenue, the site faces the Atlantic Ocean. Oceanfront condominiums are typically some of the most profitable asset classes, commanding some of the region’s highest prices.