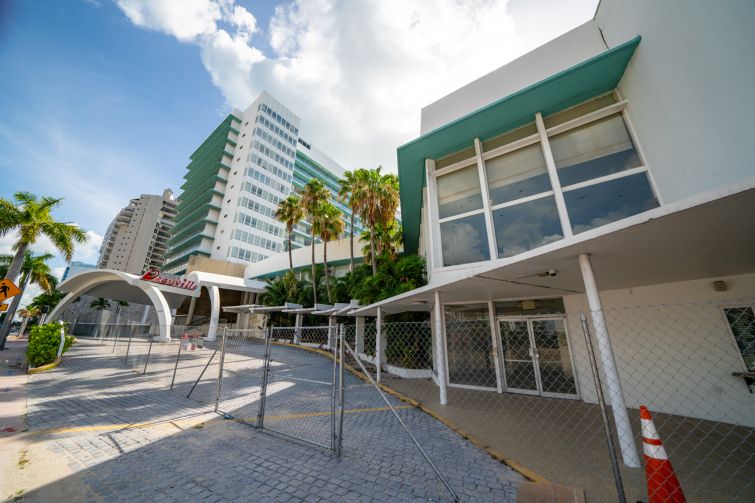 Some 53.4 percent of voters rejected Ross’ bid to exceed the current building-size regulations, effectively halting his plans to redevelop the historic Deauville Beach Resort, a MiMo-style property, which served as the location of The Beatles’ famed performance on “The Ed Sullivan Show” in 1964.

The New York-based developer wanted to increase the floor-area ratio, a method of regulating a building’s size, for the Deauville lot at 6701 Collins Avenue and two adjacent parcels. Had the ballot measure passed, Related would have developed an Equinox-branded complex with two luxury towers, featuring 125 condos and 175 hotel rooms. (Related owns Equinox.)

The development seemed like a passion project for Ross, who partly grew up in town. “As a native of Miami Beach, this project is personal to me. I know what this site means to the people of Miami Beach,” Ross said when announcing his purchase bid in May.

The billionaire developer enlisted world-renowned architect Frank Gehry to design the new complex. In July, Ross also spoke at a Miami Beach city commission meeting, where he mapped out his plans for “a world-class project.” Yes For A Safe and Strong Future, a political action committee tied to Related Companies, spent over $1 million in favor of the referendum.

Ross’ plans for the Deauville site are unclear following the defeat. The sale was contingent on voters approving the height increase. When reached for comment, Ross and Related representatives provided a statement from Yes For A Safe and Strong Future.

“While we are disappointed with the outcome, we know North Beach deserves an economic engine, not an eyesore. We appreciate the tremendous support we received from thousands who backed a real vision for a better North Beach and still believe there’s a brighter future ahead,” the statement reads.

Regardless of Tuesday’s vote, the Deauville property will be demolished. The resort has been closed since 2017, following an electrical fire. It fell into such disrepair that a Miami Beach official deemed the resort structurally unsafe and ordered it to be knocked down last January. A Miami-Dade circuit judge later upheld the order. The demolition is scheduled for this Sunday.

No More Offices on Lincoln Road

Ross wasn’t the only developer to lose in Miami Beach.

Ventures led by Sternlicht’s Starwood Capital and Peebles’ Peebles Corporation both sought 99-year leases to build competing office-heavy, mixed-use projects on city-owned land near Lincoln Road, a pedestrian shopping street in Miami Beach. As with Ross, voters rejected each of the proposed leases by 53 percent.

Had they been approved, the leases together would have generated $355 million for the city over 99 years, as stated on ballots. Developers saw an opportunity to build boutique offices in Miami Beach in part to serve billionaires, who relocated to the island town during the pandemic and now seek offices near their residences.

At 1688 Lenox Avenue and 1080 Lincoln Lane North, Starwood’s plans with partners Integra Investments and The Comras Company called for a 100-foot-tall structure that would feature office space, ground-floor retail (including 1,000 square feet leased to a nonprofit rent-free) and a public parking lot to replace the existing surface lot.

“We will consider working with the city to make some adjustments to our proposal and consider presenting it to the voters again without such a crowded and controversial group of ballot questions. That would give the voters the opportunity to focus on the many public benefits from our proposal,” Peebles said in a statement.

The developer pointed to the success of the hotel project near the Miami Beach Convention Center. In 2016, voters rejected a proposal by Portman Holdings, only to approve another plan two years later, put forth by David Martin‘s Terra and Jackie Soffer‘s Turnberry Associates.

A representative for Starwood’s joint venture did not immediately provide a statement.

The Ones That Passed

Miami Beach residents did approve some referendums related to real estate — those which weren’t directly tied to developers.

Voters agreed to boost the floor-area ratio for oceanfront hotels in the South of Fifth neighborhood that want to convert to residential buildings. Residents also greenlighted a floor-area ratio hike for certain office and residential properties east of Washington Avenue between First and Second streets if the owner agrees to prohibit hotels and short-term rentals on the property.

Residents also passed a ballot initiative that asked voters whether the municipality should seek voter approval before selling or leasing city-owned properties for over 10 years. The measure affects properties between West 43rd Street and West 40th Street, and from Pine Tree Drive on the east to Alton Road on the west.

Unlike in Miami Beach, Developers Win in Miami

Across the bay in Miami, developers had better luck Tuesday. Sixty-four percent of voters approved a 99-year lease extension for a waterfront site in Downtown Miami, paving the way for a $1.5 billion development.

Hyatt Hotels and Miami-based developer Gencom plan to tear down the James L. Knight Center and build three skyscrapers. Called Miami Riverbridge, the development would include 1,542 rental apartments in total, along with 615 hotel rooms and 264 serviced apartments. The annual rent will jump from $250,000 to at least $2.5 million. The joint venture has also vowed to make a $25 million contribution to affordable housing initiatives, the details of which have not yet been released.

“Miami Riverbridge will improve access to and from the Hyatt Regency Miami site, activate the Miami riverfront, and meet growing demand for housing, hotel rooms and more meeting space in our downtown,” James Francque, global head of transactions for Hyatt, and Phil Keb, executive vice president of development for Gencom, said in a joint statement.

Update: This story has been updated since publication to include remarks from Don Peebles.