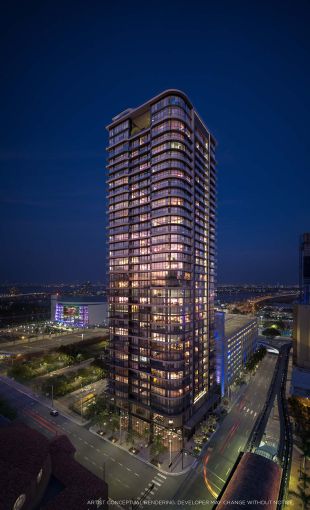 Another tower is set to rise in Downtown Miami.

All units at the planned 40-story development have already been sold, despite the fact that no shovel has yet hit the ground. Construction is slated to start next month with completion anticipated in 2025. The buyers have signed hard contracts and the “vast majority” have paid security deposits, Marco Ziff, an executive at Aria, told Commercial Observer. The final sale prices range between $350,000 and $800,000.

The project is geared toward investors. The individual condos, which range from 603 square feet to 1,015 square feet, will be furnished and the building will have no restrictions on short-term rentals.

Located at 500 NE First Avenue, the venture, called 501 First Residences, sits across the street from the downtown chapter of Christ Fellowship, less than half a mile from what was formerly FTX Arena, the home base of the Miami Heat. Aria Development paid $8.3 million for the half-acre site in 2015, which still houses a two-story building constructed in 1924, according to property records.

Downtown Miami, home to a noticeable homeless population today, is set to undergo a major transformation over the next decade. A slew of high-profile developers, such as the Related Group, the Naftali Group and the Witkoff Group, are developing residential towers at Miami Worldcenter, one of the largest private master-planned developments in the country, stretching 27 acres.

The section of Biscayne Boulevard in Downtown Miami already holds luxury condominium buildings, including the Zaha Hadid-designed One Thousand Museum, which counts David and Victoria Beckham as owners.