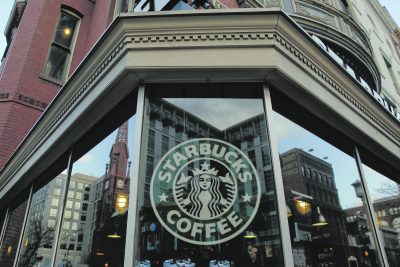 Staffers at the Starbucks and Amazon Go collaborative store in Midtown are trying to unionize.

Workers at the 620 Eighth Avenue store filed a petition Friday to hold a union election, according to the National Labor Relations Board and Starbucks Workers United, the union seeking to represent the roughly 29 employees of the shop.

Joseph McElhaney, an employee at the Eighth Avenue store since September, said staffers often have to do double-duty of making Starbucks drinks while also teaching customers how to use Amazon’s register-less checkout system, despite not being paid by either company for the extra work. McElhaney added that the cafè often lacks enough staff to handle the high volume of customers.

“We’re doing things that personally I feel like is out of our job description,” McElhaney said. “I’m trying to figure out why I am trying to explain this different product to the same body of customers. It feels like we are being taken advantage of for our work.”

Spokespeople for Starbucks and Amazon did not immediately respond to requests for comment.

The store at the base of the New York Times Building opened in July and is the second Starbucks to use Amazon’s technology, following the debut spot at 111 East 59th Street.

If the union push is successful, the Eighth Avenue location would be the eighth Starbucks outpost to unionize in New York City, adding to more than 250 unionized cafè nationally, according to Workers United.

While the cashierless Starbucks is starting its push, already unionized workers at the java purveyor’s flagship roastery at 61 Ninth Avenue started a strike this week to protest the store’s alleged unsanitary conditions — including bed bugs and a moldy ice machine — along with the chain’s failure to bargain a contract with staffers since the April union election, according to Workers United.

None of the Starbucks stores that unionized around the country starting last year have been able to agree on a contract with Starbucks, according to Workers United.