Why Developers Who Use Northspyre Might Never Use Another Spreadsheet

Future Of Real Estate Development Technology, brought to you by Northspyre 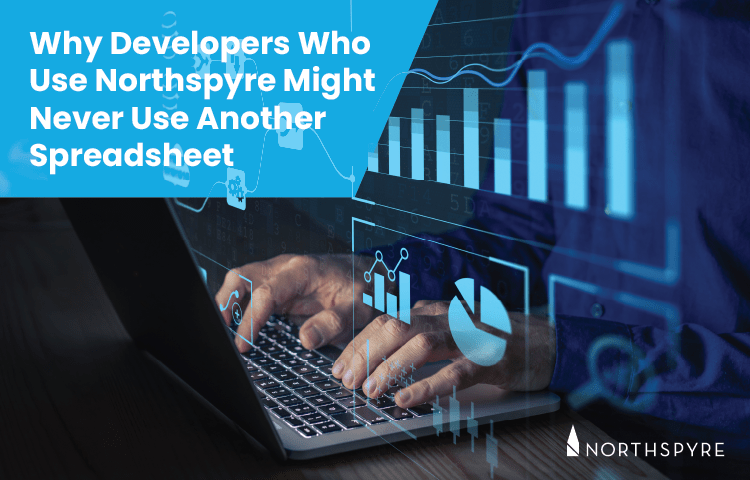 For project leaders in the world of real estate development, spreadsheets have long been both a blessing and a curse. In terms of sheer utility, they provide a way to keep track of essential figures, costs and deadlines. But the spreadsheet method is far from ideal.

Tracking a project across a multitude of spreadsheets is a messy and often confusing process that has been screaming for improvement, much less innovation, for years.

The company and platform were founded in 2017 by William Sankey, a developer who worked on large-scale projects and found himself increasingly frustrated and overwhelmed by the shortcomings and limitations of spreadsheet-driven development processes.

“I was managing major mixed-use projects, including serving as assistant to the project executive on the redevelopment of Madison Square Garden, which was a very complex, billion-dollar-plus project,” said Sankey, Northspyre’s co-founder and CEO. “I was largely managing everything out of spreadsheets, which were error-prone and heavily reliant on data entry.

“For example, I had four or five different spreadsheets for that one project, which I was reliant on to answer critical questions on a day-over-day basis,” said Sankey. “The paradox of spreadsheets is that they are only as good as how much time you spend updating them. Meaning that, while the project team is supposed to be proactively focused on strategic decision-making, everyone ends up playing games of telephone, spending late nights trying to get the spreadsheets updated, and ultimately often resorting to gut-driven decisions and instinct to make key project decisions. Zoom out and consider that most developers are planning and managing multiple projects at a time, what you end up with is a spider web of information silos, meaning that senior leadership and critical project stakeholders rarely have visibility and transparency into challenges and opportunities across their pipeline.

“Imagine trying to build a repeatable, data-driven development process where the foundation of your institutional knowledge, project history, cost and vendor data are a bunch of fragmented spreadsheets and rigid folder hierarchies on a company drive,” said Sankey. “It’s incredibly difficult, and many teams struggle to truly operationalize their processes in a way that de-risks their development process, empowers them for better project outcomes, and scales their pipeline.”

While Northspyre grants tremendous advantages to developers, including proactive warnings when project costs threaten to go over budget, it’s the platform’s use of automation and AI that truly makes Northspyre a next-generation solution for handling the complexities of development.

Neil Griffin, vice president at Northspyre, points out that traditional systems require increasingly escalating data entry man-hours to handle the volumes of data the project will produce, and that Northspyre eliminates this need.

“Northspyre makes the development process much more data driven from the very beginning,” said Griffin. “A team building a budget for a future project traditionally calls vendors and talks with project managers who’ve worked on similar projects to try to guess what numbers to use. That’s how projects start. Northspyre allows you to pull historical cost and vendor data that’s automatically indexed inside of Northspyre. This provides developers with accurate, data-driven budgets in minutes instead of days.”

On a traditional development project, once the project is up and running, the developer receives a steady influx of invoices, contracts and change orders. They have to manually input the information into various spreadsheets and fragmented systems. As the project proceeds, the complexity of the development process multiplies, eventually bogging down the project’s accountants and developers with a slew of budget and vendor data.

Northspyre removes the need for any of this to be handled manually, coordinating it all and declaring what it means for current cost and budgeting considerations.

“Traditional software systems simply move all of the administrative work of data entry and data management to the cloud, meaning that their utility is throttled by difficult implementations and an increased administrative cost and burden to maintain them,” said Sankey. “Ultimately, what allows teams to de-risk project delivery, minimize project costs and scale their pipeline is visibility and real-time project information — early warning systems into where budgets might be trending over. Without automation and data, how are you going to have that information at your fingertips? If it’s a matter of your team having to hire 15 more analysts to do data entry all the time so you have this information, that’s an untenable value proposition. That’s not realistic. Automation, AI, is the answer. That’s Northspyre.”

The company’s clients are reaping the benefits of Northspyre’s innovation.

“The ROI is worth every penny,” said Shaun Gallagher, vice president of development for GMH Communities, a Northspyre client. “If you’re not using Northspyre, chances are you’re losing time and money and missing out on identifying areas where you could save additional funds.”

Money is not the only savings produced by Northspyre, as Griffin notes that the Northspyre platform can cut 30 to 40 percent off the time spent working on the project by eliminating administrative tasks.

“Real estate owners, developers and project management teams are traditionally staffed very lean with a focus on optimizing overhead costs,” said Griffin. “The issue is that while they might be operating with a lower headcount than the traditional knowledge-based industry, the administrative burden of managing the development process is just immense, meaning that they’re basically left with fewer people, working longer hours and doing more admin work than their peers in, say, finance or manufacturing. When your resources are consumed by tedious admin work, it’s difficult to find the time and headspace to make the strategic decisions that will scale the portfolio and ultimately increase the bottom line. By eliminating 80 percent of the tedious admin work that goes into running a development project, Northspyre empowers real estate project teams to focus on strategic directions of their projects and portfolio while truly allowing teams to optimize their overhead costs.”

Northspyre can also help integrate the information silos that often exist between a company’s acquisitions and development teams, just one more function that makes Northspyre a comprehensive solution for all development-based tasks.

“Projects usually originate with an acquisitions team that is constantly evaluating new project opportunities, evaluating their highest and best use, and estimating what they might cost to develop,” said Griffin. “The issue is that acquisitions leads typically don’t stay on and manage projects as they move through development, meaning that they don’t have access and insight into the actual budget and cost data it takes to develop a project. So in many cases, acquisitions might move forward with a deal and make a huge commitment like acquiring a property, but then months later the development team gets the project and realizes that the budget assembled for the project was grossly under-estimated. That’s a huge problem that can lead to budget issues before a project even starts. Doing deep due diligence on the initial cost assumptions of every project opportunity would strain internal resources, bottleneck pursuit and slow a developer’s speed-to-market in a game ultimately predicated on a team’s ability to be faster than their competition.”

Northspyre empowers developers to be not only more accurate, but also faster when evaluating and estimating potential project costs. By aggregating, indexing and benchmarking cost and vendor data across a developer’s entire portfolio of active and completed projects, every key stakeholder has access to accurate information to make more data-driven decisions and assumptions. So with Northspyre, an acquisitions lead can pull up averages from discrete project types or asset types based on real data, and assemble a very reasonable project cost estimate in seconds while subsequently ensuring that everyone across the organization has visibility into every potential project, no matter its stage and maturity. One central value of Northspyre is that it breaks down all of the fragmented information silos which bottleneck growth and lead teams to make the same mistakes over and over, and turns your development process into one virtuous, data-driven cycle, in which every past decision empowers an easier, more data-driven decision on your next project.”