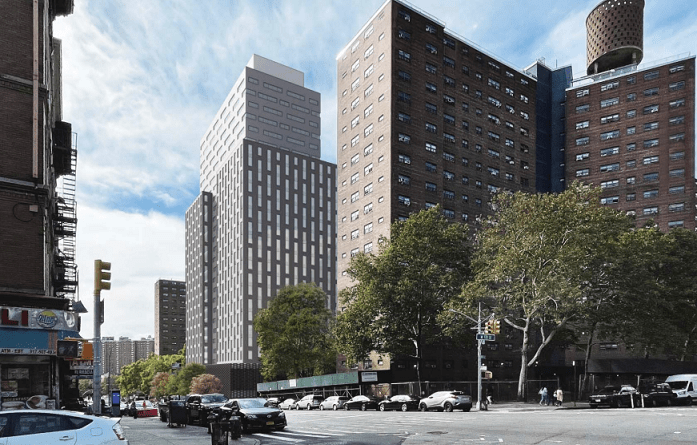 Grid Group and its investment partner Lefkas Realty have sealed $32 million of construction financing to build a mixed-use residential tower development at a public housing site in West Harlem, according to property records.

Valley National Bank supplied the loan for the partnership’s planned 26-story project on 1440 Amsterdam Avenue, which will include 393 apartment units and 10,907 square feet of commercial space.

The New York City Housing Authority (NYCHA) sold the vacant multi-lot site, which was part of the Manhattan Houses public housing project, to Grid for $6 million, Crain’s New York Business first reported. Grid also acquired up to 280,000 square feet in air rights from the 12-acre property situated between West 129th and West 133rd streets that will generate $28 million in funding to used exclusively at Manhattanville Houses, according to NYCHA.

“Through our New York lending team headed up by Chris Gregg, Valley was able to assist our longtime client Grid Group and their partner Lefkas Realty in financing the first stage of this project,” Chris Coiley, Valley National Bank’s head of commercial real estate for the New York and New Jersey markets, said in a statement. “This project when completed will deliver much needed affordable housing, retail and community space to the neighborhood.”

Permits were filed late last year by Yiannes Einhorn, principal of Grid Group, for the 1,708,708-square-foot development that in addition to residential and commercial space will also provide 36,313 square feet for community facilities, New York Yimby previously reported. The structure, which is designed by The Gluck Architectural Collaborative, is slated to include 199 enclosed parking spaces, according to Yimby.

The 1440 Amsterdam Avenue property will include roughly 120 rent-restricted apartments with current NYCHA residents receiving priority for 25 percent of these units. A new Associated Supermarket is planned that will restore a previous supermarket shuttered bu a November 2013 fire.

Construction is scheduled to begin in early 2023 with an opening expected in summer 2026.

“The sale of development rights at Manhattanville Houses demonstrates how NYCHA is using every tool at our disposal to invest back into our communities,” Jonathan Gouveia, executive vice president of real estate development at NYCHA, said in a statement. “By leveraging this transaction in combination with the PACT program, residents at Manhattanville Houses will see their buildings and apartments fully rehabilitated, they will have access to a new community space and grocery store, and NYCHA residents will also have priority placement in the new residential building.”

Officials at Grid Group and Lefkas Realty did not immediately return requests for comment.