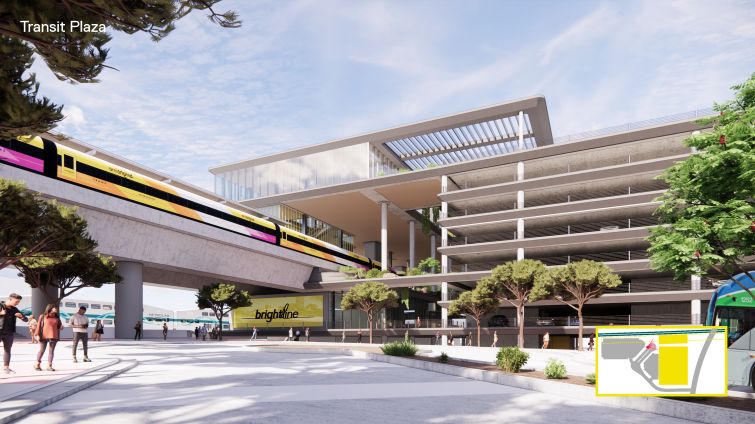 A rendering of the Rancho Cucamonga Station. Photo: Brightline West

Train, roll on — on down the line.

Construction may soon be underway on a station forming the western terminus of the high-speed rail set to cut through the Inland Empire on the way to Las Vegas.

The sale of 5 acres to Brightline West was approved Wednesday by the Rancho Cucamonga City Council and the San Bernardino County Transportation Authority (SBCTA) board of directors.

The sale price has not been decided on, according to a spokesperson for Brightline West.

“The public-private partnership between Rancho Cucamonga, SBCTA and Brightline West will help transform the region through an exciting multimodal transportation hub in the heart of the Inland Empire,” Rancho Cucamonga Mayor Dennis Michael said in a statement. “Cucamonga Station aligns with our city’s quest to anticipate and embrace the future, relentlessly pursue improvement, and promote a safe and healthy community for all.”

The Brightline West rail will give riders connections to the Metrolink San Bernardino Line, as well as Omnitrans Bus Rapid Transit. Later, it will connect to a subterranean rail line to the nearby Ontario International Airport, according to the Rancho Cucamonga city officials.

“These agreements provide Brightline control of the land throughout the final mile of its system connecting from Interstate 15 to the Brightline station in Rancho Cucamonga as well as Brightline’s Rancho Cucamonga station site,” Brightline said in an email to supporters of the project. “These approvals represent a key final step in advancing Brightline West’s development.

The high-speed rail line is expected to begin operations sometime between 2026 and 2027. About $300 million in construction financing is projected to be spent in Rancho Cucamonga alone, and more than $5 billion will be spent in San Bernardino County over the course of the next four years.

Brightline also operates a high-speed rail line linking Miami, Fort Lauderdale and West Palm Beach, Fla., and announced it would soon test train speeds of over 110 mph on another route it operates through Martin and St. Lucie Counties.

An analysis by Beacon Economics found that the high-speed rail project could  create 11,000 jobs per year across San Bernardino County and more than 700 jobs per year in Rancho Cucamonga during the construction period.

Rancho Cucamonga is expected to gain about $70 million per year in property tax and $100 million sales tax revenues during the construction period, as well as see increased housing demand.

In August, a Redfin report stated that the prices of homes in Rancho Cucamonga had increased 6.5 percent year-over-year, but the number of homes sold that month — 142 total — was down 27.6 percent compared to the same period last year.

From July to September, Redfin found that 80 percent of homebuyers in Rancho Cucamonga were looking to stay in the city while 20 percent were trying to get out of Dodge, with the majority of them looking to San Diego or San Jose for a fresh start.