If there is a turnaround 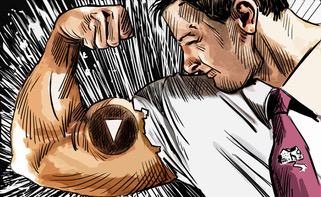 If there’s an effort afoot to rebrand and revive the coworking firm Knotel, it’s been hard to find. Last year, brokerage Newmark acquired the company after its bankruptcy and shook up Knotel’s executive ranks. Months on, some of its coworking competitors have said it appears the company has basically gone dark.

But in recent months there have been small signals of a revival, or perhaps a second life, the culmination of the installation of a number of former WeWork execs, including Michael Gross, in top leadership positions last March.

There’s been scattered news of property deals since the spring, including a handful in the hot South Florida market, like a warehouse in Miami’s Wynwood neighborhood — a 1949 property destined for conversion to boutique offices and being redesigned by famed Miami architecture firm ​​Arquitectonica — and an 18,000-square-foot lease in an upscale new West Palm Beach development. Combined with Newmark’s other flex-work acquisitions, namely the French firm Deskeo and recent deals in Central and Eastern Europe, the firm’s global corporate services division now has true international positioning in the coworking sector.

“Now is a new dawn for coworking,” said Sam Rosen, CEO and founder of Deskpass, which facilitates access to coworking spaces. “Newmark is going to get there faster, leveraging an established brand, than somebody who’s starting from the ground up.”

Most noticeably, on Sept. 29, Knotel debuted a new work club concept in London’s popular Clerkenwell neighborhood. Old Sessions, a restored historic courthouse, will contain 22,000 square feet that mixes “the amenities of a modern workplace with iconic spaces and cultural experiences.” It’s the initial location of what Gross is calling the “first launch of a new concept for Knotel” bringing workclubs to “outstanding properties” in Europe and North America.

“Companies are seeking out inspiring locations with amenitized flexibility in their workspace planning,” Knotel CEO Gross said about the new concept in a statement. “That’s why we are backing bricks and mortar in London — especially when the bricks are as beautiful as those in the Old Sessions House.”

Rosen sees this kind of experimentation as just what the sector should be doing.

“Landlords being creative about the types of experiences and offerings they’re putting out into the market, and not just offering the same asset that is severely underutilized, is smart,” Rosen said. He compared it to the new Industrious WorkLife space at the Penn 1 Building in Manhattan, which features a layout with various conference room sizes, and the expanding Hoxton Hotel high-end coworking brand.

Is this a long-awaited pivot? No representatives from Knotel or Newmark responded to repeated requests for comment for this story. But this new activity may signal the start of a pandemic-era turnaround that Knotel desperately needs.

Knotel, founded in 2015 and briefly valued at $1.6 billion, emerged as a competitor to WeWork during the firm’s Neumann era, with CEO and founder Amol Sarva “gleefully trolling” the larger company, even parking a Knotel-branded bus outside the rival’s HQ. (Disclosure: Commercial Observer’s publisher, Joseph Meyer, was an early investor in Knotel.) But Knotel also was hit much harder by the pandemic, laying off or furloughing half its staff in March 2020, drawing bad press for unpaid rent, and eventually declaring bankruptcy by the following January. Sarva lashed out at the process in a letter, criticizing Knotel’s new leadership (writing that “Newmark was a stalking horse on a process that used bankruptcy to take control of Knotel”) and deriding the “Adam Neumann-era WeWork bros” that Newmark put in charge.

Alexander Goldfarb, managing director and senior research analyst at Piper Sandler, said he’s heard Knotel has been doing well over the past year, with healthy occupancy and desk sales. And Newmark’s acquisition after a bankruptcy enabled significant “balance sheet cleansing benefits,” including letting go of underperforming leases, he added.

The macroeconomic case for a boom in coworking — especially coworking brands like Knotel linked to the big brokerages or real estate services firms — rests on uncertainty. The Fed’s moves to raise interest rates and tame inflation have, as analyst Alex Snyder, portfolio manager at CenterSquare Investment Management, said, been the equivalent of a “bull in a china shop.” Any business based on people working in an office, he said, should be really scared. But combined with the stubborn reality of remote work, the emptiness of central business districts, and the increasing desperation of office owners and landlords to fill their floors with something, it appears to be a perfect time to expand coworking.

“Being able to adjust like that, people are willing to pay a massive premium for that,” Snyder said. “I’m pleasantly surprised by the resiliency of the coworking business model. We’re in the perfect storm of everyone being terrified by the macro environment, but they still have a job.”

The new Knotel’s twin moves toward Miami geographically and into luxury, amentized, unique work clubs follow larger trends: greater commercial real estate investment in the Sun Belt and the suburbs, as well as the need to differentiate and offer something unique as a flood of coworking firms try to seize the moment. Now is an ideal time to build, Snyder said, with plenty of capital for R&D and no need to constantly worry about keeping the lights on.

“I think coworking is here to stay, and it’s going to be very strong once we get out of this economic environment,” he added. “So something like Knotel, wrapped in the blanket of a very profitable, bigger company, can brand build while we’re in this bear market. There’s a gold mine on the other side, and they’re a great pickax.”

Newmark’s acquisition of Knotel last year, for a total of $90 million in stop-gap funding and new investment, was cheap enough where it could be a no-stakes bet on coworking. Why not bring in a brand name and experiment with the concept, and throw something against the wall and see what sticks? At the same time, it seems unlikely Newmark would bring in experienced WeWork vets to run the company if there wasn’t some serious interest in the concept. That is especially true of a vet like Gross with a background in luxury hotels and a reputation for being gregarious.

Knotel does have some baggage with the name, branding and previous financial struggles. But it’s not as if other coworking players aren’t also burdened by quite strong reputations, or have their own recent struggles: Convene laid off a substantial number of employees and shuttered locations throughout 2020, and WeWork, of course, hasn’t been able to shake its particular renown as it rebounds with new leadership.

Rebuilding the Knotel brand also fits in perfectly with larger industry trends, with large service and brokerage firms expanding their own coworking offerings through acquisitions and partnerships. Their clients, struggling with long-term vacancy and low demand, seem to be clamoring for more flex options, whether it’s a way to reposition assets, generate profits or both.

“I do feel strongly that for real estate services firm, having a point of view on flex and a way to navigate that sector is going to be an important part of competing in the coming years,” said Industrious CEO and co-founder Jamie Hodari, whose firm has received $330 million in investments from CBRE.

Of course, Knotel also faces strong headwinds, including a lack of significant expansion activity in the past year, and increasing challenges acquiring, with capital being so precious during a downturn. But the risks of playing the coworking market wrong seem miniscule in light of the larger strategic challenges Newmark, Knotel and others face.

“If you’re Newmark or another large broker, you have to get creative,” said Rosen. “This is an asset they have at a time where they’re looking for new opportunities and new ways to grow.”