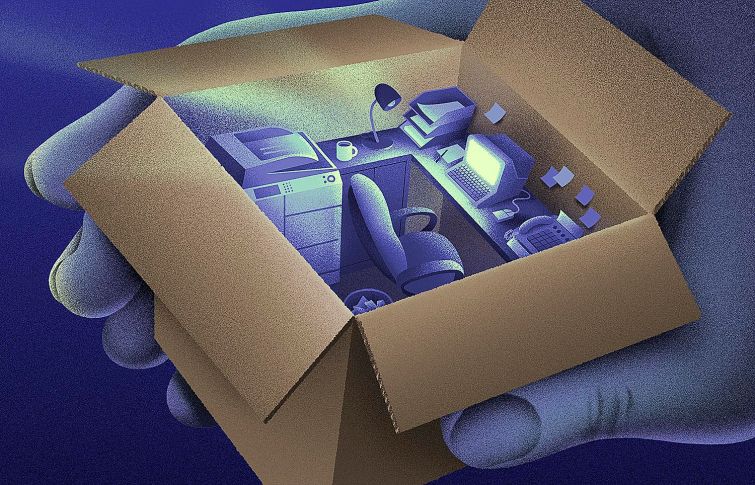 More companies are moving their offices into storage or giving them up entirely and hiring movers to throw away their furniture. Illustration: Adrián A. Astorgano/for Commercial Observer

As New York City’s office market continues to struggle with high vacancy rates and declining asking rents, many office tenants are downsizing or getting rid of their offices entirely, coming to terms with the reality of a hybrid or fully remote workforce.

Two major New York moving companies told Commercial Observer in late September that they had moved a significant number of commercial offices into storage, and that there had been an increase this year in companies either disposing of office furniture or putting it up for auction.

Lior Rachmany, the CEO of Dumbo Moving and Storage, said he’d seen a large increase in companies liquidating office furniture in the past two fiscal quarters compared to last year. The Brooklyn-based mover did about 1,000 small and midsize office moves at the height of the pandemic — roughly from March 2020 to March 2021 — which was 150 percent higher than in 2019. Most of those companies have moved out of storage this year, but roughly 30 percent, or 300 businesses, opted to toss their furniture.

“People did not come to the office, and companies decided to break their lease or not renew their lease,” said Rachmany. “In terms of storage, there’s not a lot of moving back into the office. Day to day, in 2022, we see a lot more downsizing. They’re hiring us to remove the furniture and deliver items to liquidation centers or dumping areas.”

He also noticed that small and medium-size law and finance firms are increasingly moving to the suburbs of Connecticut, New Jersey and Long Island, both to serve remote workers and to save money on pricey Manhattan office space. That correlated with a 300 percent increase in people moving from New York City to the tri-state area’s suburbs over the course of 2020 and 2021, according to Dumbo Moving’s data.

“Many young professionals fled the city during the pandemic, moved within a 50- to 100-mile radius, and many are not coming back to the city,” Rachmany said.

Voyo Popovic, who runs Manhattan-based Piece of Cake Moving and Storage, observed very similar trends in commercial moves over the course of the pandemic. In 2021, 18 percent of Piece of Cake’s commercial moves went into storage. This year, only 12 percent of office moves ended up in storage facilities. He’s also seen an increase in firms liquidating office furniture — whether from storage or during a move — as they commit to either shrinking their workspace or surrendering it entirely.

“A lot of the commercial moves ended up being disposal services for desks, chairs,” Popovic explained. “Those companies have all or most of their teams working remotely. Now that they’ve proven that it works, companies don’t have to keep as many desks in an office anymore.”

Many smaller companies are also turning to coworking locations or shared desk spaces rather than signing a new long-term office lease. Rachmani, who is the preferred mover for WeWork, said that coworking spaces are more attractive than they were before the pandemic because per-desk rates have declined. Coworking also gives firms the flexibility to change the amount of space they rent on a weekly or monthly basis.

“I think small startup and smaller-size operations are finding this works better for them,” Rachmani explained. “They don’t need to own furniture, they don’t need to bring anything of their own. They don’t need assets or movers. They just come in with laptops, plug in, and work.”

Piece of Cake also found that more companies were leaving the city this year. While 9 percent of its commercial clients departed the five boroughs in 2021, that figure rose to 11 percent in 2022. The top three destinations for those leaving New York City were Connecticut, New Jersey and Florida. Financial firms in particular were decamping to tony Connecticut suburbs like Westport, Stamford and Greenwich. Those heading to New Jersey weren’t going far either, ending up in Hoboken, Jersey City and Newark. And companies headed to the Sunshine State were mostly moving to Miami.

“Why pay for Fifth Avenue when you can pay lower rent and be closer to your people?” asked Popovic.

The effect of companies shrinking or decamping to cheaper areas has reverberated throughout the New York City office market. Office vacancy in Manhattan reached 16 percent, its highest level in two decades, in the second quarter of 2022, according to JLL’s most recent market report. Average asking rents also fell 3 percent — to $80 a square foot — for direct office space in the second quarter, and asking rents for sublease space declined slightly to $60 a square foot.

These shifts were largely driven by tech and creative tenants relocating, though the amount of vacant sublease space also grew by 1.7 million square feet in the second quarter. There were 45 Manhattan office listings with over 250,000 square feet of contiguous space each in the second quarter, according to Colliers, which noted that available supply has increased 72 percent since March 2020 to a total of 92.8 million square feet.

Meta and Amazon also abandoned planned expansions in Manhattan this summer, in a move that has set commercial office owners on edge. Meta, the company formerly known as Facebook, bailed on a planned 300,000-square-foot expansion of its offices at 770 Broadway in NoHo. Amazon, meanwhile, reduced the amount of space it planned to sublease from JPMorgan in Hudson Yards.

“Like many companies, we’re still learning how these new habits may impact our office footprint,” John Schoettler, Amazon’s vice president of global real estate and facilities, told The Wall Street Journal this summer in a piece about the company’s decision to pause construction on six new offices in Nashville and Bellevue, Wash.

Alphabet, Apple and Microsoft have all announced plans to slow hiring through the end of the year, as they stare down the barrel of rising production costs and slower economic growth.

Ultimately, Popovic, from Piece of Cake Movers, felt that smaller offices and hybrid work were here to stay.

“The most interesting trend is larger offices moving into smaller offices, because it speaks to what we read in the news every day,” he said. “Companies are kind of setting the policy of part-time remote work or full-time remote work, and they have a more strict set of working hours. Bigger companies and smaller companies, they don’t need such big offices anymore.”