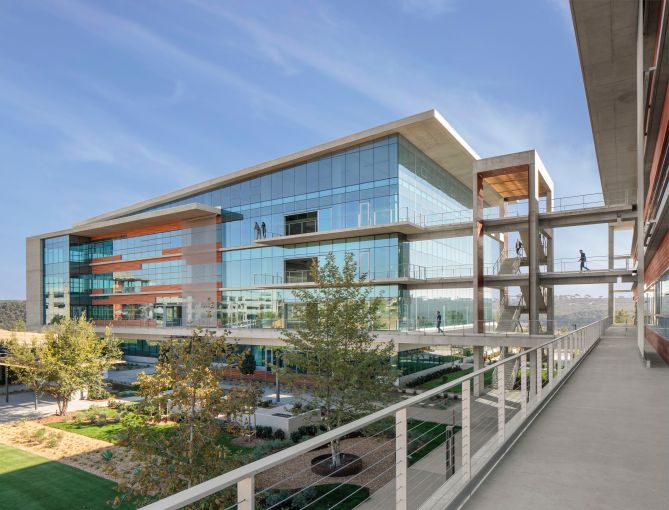 The $475 million senior portion of the loan was syndicated to Bank OZK, with Invesco retaining the $100 million mezzanine position, sources familiar with the transaction told CO.

The property, at 6040 Edgewood Bend Court, will serve as the headquarters for biopharmaceutical company Neurocrine Biosciences, which specializes in neurological and endocrine-related disease and disorders. The company, which has a market cap of $10.2 billion as of Sept. 30, has leased the development’s first two phases in their entirety through 2036.

Phase I of the project is a completed shell building where tenant buildout will commence shortly after closing, while Phase II just broke ground. The property has an additional land parcel that’s fully entitled for an additional 252,000 square feet of life sciences space as Phase III.

The financing was led by Invesco’s Justin Chausse, senior director of originations.

Charlie Rose, Invesco Real Estate’s managing director and portfolio manager, told CO:“The Phase I portion of the collateral was effectively a recapitalization, with a construction sleeve for Phase II and the Phase III land serving as additional collateral. We pride ourselves in our ability to structure and close highly complex transactions, and this was certainly an example of that type of flexibility and creativity in financing.”

The Aperture Del Mar deal had plenty of appeal for Invesco, an active lender in the life sciences space.

“Invesco Real Estate made a strategic push into the life science sector starting in 2018,” Rose said. “At that time, we identified three key markets in which we would focus our efforts: Boston and Cambridge; the San Francisco Bay Area; and San Diego. Within those markets, we developed a short target list of the most liquid and supply-constrained submarkets.”

Since then, Invesco has closed 12 life science loans in the San Diego market alone, totaling more than $1.4 billion of financing.

The Aperture Del Mar opportunity “was particularly attractive because Gemdale has designed and built absolute best-in-class institutional-quality collateral in a great micro location and fully leased the collateral on a 13.5-year term prior to loan closing to Neurocrine — which is a leading life science company with both existing commercially successful products and a strong pipeline,” Rose said. He added that the Gemdale team — also located in Southern California — “has a strong track record of executing on high-quality and complex developments, with a deep bench of talent and a pragmatic approach to dealmaking which aligns with our relationship-based approach to lending.”

It’s not Invesco’s first time teaming up with OZK, either. “Bank OZK has been one of our key strategic partners for many years,” Rose said. “When we originate large loans with the potential for a senior/mezz execution, we seek to partner with like-minded relationship lenders with whom we have long-standing relationships. OZK is clearly one of those partners for us.”

Eastdil Secured negotiated the debt on behalf of Gemdale.