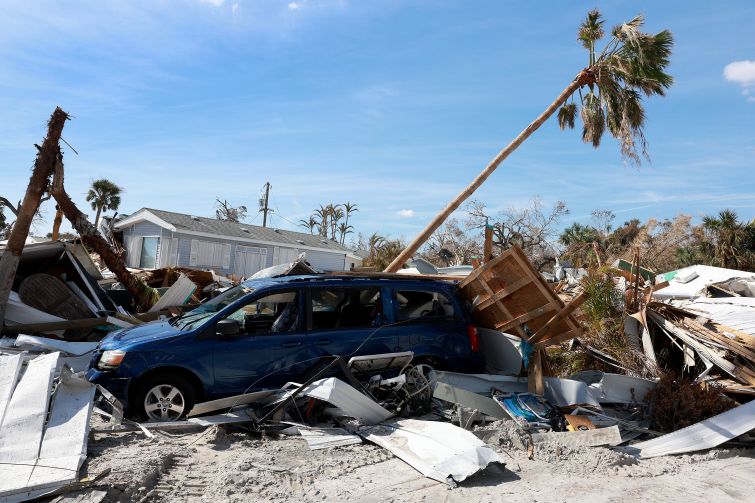 Doub’s two-story home, situated less than three miles from the ocean in hard-hit Fort Myers Beach, remains standing. But two feet of floodwater blew through the garage door and into the living room and kitchen, contaminating almost everything inside.

“[The water] leveled everything out like boom!” Doud said. He and his wife, who held back tears as she cleared out their home, retired to Florida four years ago from Oklahoma.

Florida is now grappling with the aftermath of Hurricane Ian, a powerful Category 4 storm that made landfall last Wednesday, and which may turn out to be the state’s deadliest and costliest hurricane.

At least 100 people have died, according to a tally on Monday afternoon. More than 550,000 homes still don’t have electricity. Water in at least 18 counties is still not safe to drink. More than 1,600 people were rescued, the office of Florida Gov. Ron DeSantis said Sunday.

Severe flooding reached Central Florida as Hurricane Ian moved north before it passed over the Atlantic Ocean and made a second landfall in South Carolina Friday.

But coastal communities near Fort Myers bore the brunt of Hurricane Ian’s wrath. Along San Carlos Boulevard, which leads into Fort Myers Beach, boats had fallen into vegetation by the side of the road. Across the street, an electric fishing boat stood upside down in front of a boat dealership, whose windows had shattered. Closer to the town’s beach, a trailer community was razed.

Even for a state that’s accustomed to stormy tropical weather, Hurricane Ian’s brute force seems to have caught some Floridians off guard. Gov. DeSantis has described Hurricane Ian in epic terms, calling it “a 500-year flood event” and a “biblical storm.”

Hurricane Ian “is more similar to Katrina than the Florida storms we are familiar with. There is a different level of devastation and recovery, and it is going to impact a lot of folks,” said state Rep. Spencer Roach, a Republican who represents parts of Lee County, where the hurricane made landfall.

Questions are mounting about some officials’ delayed warnings. Local leaders in Lee County did not issue an evacuation order until Tuesday morning, just a day before the storm hit.

Gov. Desantis has defended the move, saying that the storm was initially expected to make landfall further north in the Tampa Bay area.

Hurricane Ian is also shaping up to be the Sunshine State’s most expensive storm since Hurricane Andrew, which hit Miami in 1992. Ian is estimated to have cost between $28 billion and $47 billion in real estate losses, according to CoreLogic.

Confronted with Ian’s destruction and the ever-pernicious effects of rising sea levels, Floridians are now confronting a question unimaginable perhaps just a decade ago: Should they rebuild?

While U.S. Sen. Marco Rubio vowed to “rebuild” the area, the Florida Republican acknowledged the limitations of such an undertaking. The area “won’t look the same, because you can’t rebuild old Florida. … Some of those places that had been there for so long are just gone,” the senator told ABC Sunday.

Deanne Criswell, the head of the Federal Emergency Management Agency (FEMA), urged caution for people looking to rebuild their homes. “People need to make informed decisions about their risk,” she told CNN.

The reconstruction of Lee County is likely to take a decade, according to state Rep. Roach.

Florida’s property insurance market, which will bankroll much of the reconstruction, is already teetering. Before Hurricane Ian hit, six property insurance firms had declared bankruptcy this year alone. In recent years, so many companies have left the Florida market or gone insolvent that the number of policies held by the state’s insurer, Citizens Property Insurance Company — considered a last resort — has more than doubled to an estimated 1 million between 2019 and now.

But for now, Doub and his wife have no plans to move. “Where would I go?” Doub said. “My next move would be to Texas. But they have hurricanes, too.”

“I want to be by the water,” he concluded.