Hoffman-Madison Waterfront Celebrates Completion of $3.6B The Wharf 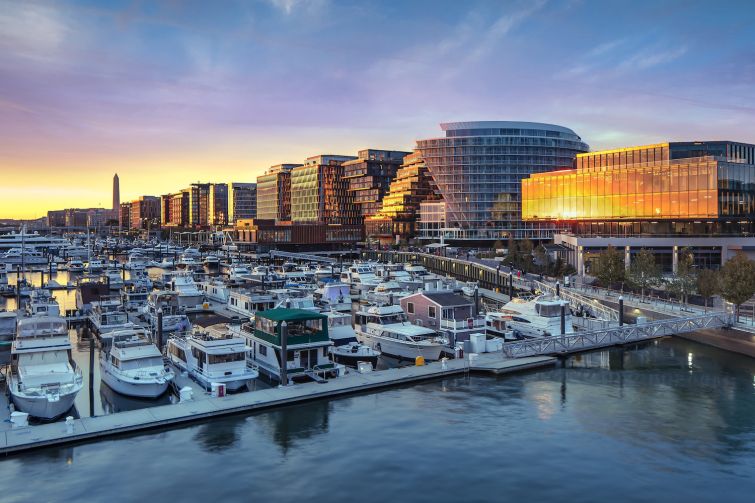 On the five-year anniversary of The Wharf’s grand opening, developer Hoffman-Madison Waterfront celebrated the completion of the $3.6 billion Washington, D.C., neighborhood, which extends from the Municipal Fish Market to Fort McNair.

The development team is comprised of Hoffman & Associates and Madison Marquette.

“As someone who lives and works at The Wharf, I continue to be in awe every day of this vibrant waterfront community and the magnetic energy that draws people here from across the region, country and the world,” Monty Hoffman, founder and chairman of Hoffman & Associates, said at the celebration, which took place outside the soon-to-open Pendry Hotel. “The Wharf is for everybody. It’s a place where people connect with each other — to live, to work, to dine, and to celebrate.”

“Since we opened The Wharf five years ago, it has become a place for residents and visitors alike to come together, shop and dine out, and enjoy our city’s waterfront,” D.C. Mayor Muriel Bowser said at the event. “Today, we’re celebrating even more jobs, housing and opportunities for D.C. residents and businesses. And we’re celebrating Washington, D.C., as a world-class waterfront city.”

The Wharf will continue to roll out new retail and restaurants over the next nine months. The food and beverage offerings include bartaco and &pizza, both coming in 2023; Bar Pendry and Gordon Ramsay Hell’s Kitchen, set to open next month; and Blank Street Coffee and Scissors & Scotch, scheduled to open next spring and summer. In addition, The Goddard School, a child education school, is set to open in November.

“After working on the project for the last decade, the unique combination of uses and programming which take advantage of D.C.’s splendid waterfront has become an ecosystem for sustained growth and a proven track record of stability and economic strength,” said Amer Hammour, chairman of Madison Marquette, the co-developer on the project.

Also on hand at the celebration was U.S. Rep. Eleanor Holmes Norton, D.C.’s representative in Congress who is credited with coming up with the name “The Wharf.”