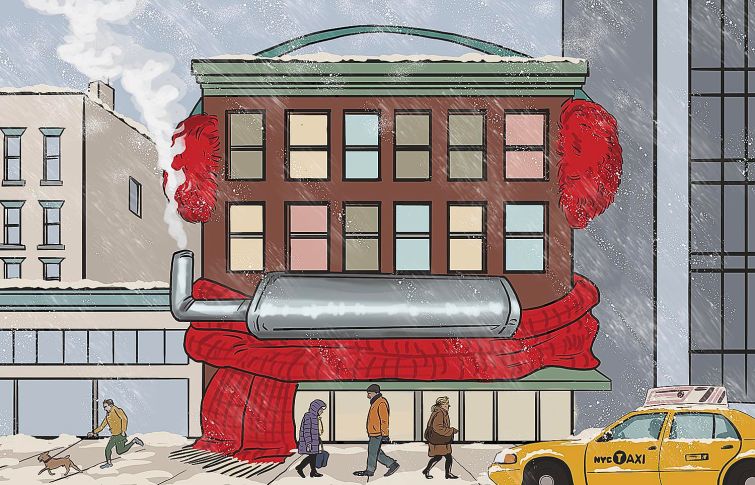 Across the Northern Hemisphere, the prospect of warding off winter’s chill has become more concerning as inflation, supply chain snarls, the war in Ukraine and other geopolitical upheaval drive up the cost of fossil fuels used to heat homes and workplaces.

A number of property technology companies are attempting to bring those costs down. At the same time, they aim to satisfy the growing demand from the public and private sectors for cleaner energy for the good of the environment and the financial bottom line. Some specialize in making belching, old heating systems more energy efficient; others zero in on where owners are wasting energy.

Among the proptech firms attempting to reduce the cost of heating homes and offices through new technology is Enviro Power, which makes “a boiler with a power plant inside,” said Dan Nadav, the company’s CEO.

Founded in 2013, the South Windsor, Conn.-based company’s “boiler geometry,” as Nadav calls it, uses a closed-loop steam turbine cycle with two heat exchangers. This transforms the existing heating infrastructure into a cogeneration system that combines the heating and power functions in homes and businesses.

“Our product is tailored specifically to multifamily apartment buildings, but there is no size limitation for this technology,” said Nadav. “It could be very large boilers with large capacity to generate electricity, and, on the other end, smaller ones that will literally fit in your apartment.”

Enviro Power is not the first company that thought of combining heat and electric generation in the same machine. The idea evolved from car companies like Volkswagen, Toyota and Honda trying to force a generator onto a heating system. However, the problem was that capturing car engine exhaust heat was highly inefficient when applied to boilers.

“An engine is not a heating system,” Nadav said. “Engines are made of around 2,000 to 3,000 parts, while boilers are made of 200 to 300 parts. Engines are quite expensive and not as reliable as heating systems’ boilers, which are highly reliable, very simple machines. So our thought was completely the other way around. Why not try to start creating power not from the engine, but actually from the boiler?”

Radiator Labs is another proptech company addressing home heating costs and efficiencies. As the company’s name implies, it focuses specifically on a heat system that is characteristic of 75 percent of New York City apartments: radiators.

“Radiator Labs decarbonizes classic or legacy buildings heated with radiators,” said Matthew Isaacs, vice president of business development and sales for the 10-year-old company based in the Brooklyn Navy Yard.

The company’s foundational product, The Cozy, is an insulated smart radiator cover that provides pinpoint temperature control in every room of the radiator-heated apartment, said Isaacs. “When deployed building-wide, The Cozy saves up to 45 percent on heating expenses and largely decarbonizes a building’s heating load,” he said.

While Radiator Labs addresses a variety of radiator-dependent buildings, including offices, commercial sites and schools, the majority of its installations are in multifamily properties owned by institutional landlords such as Rudin Management and LeFrak, as well as a number of condominium and co-op buildings.

However, this year’s increases in heating costs have resulted in the company seeing a year-over-year 350 percent jump in sales for its product, said Isaacs. “We expect to close out the year with $10 million in bulk revenue,” he added. “We’re currently installed in nearly 100 buildings in the greater New York area and a handful of buildings in the older, colder cities in the Northeast corridor.”

“This year we’ve booked more sales than in the cumulative history of the company,” added Marshall Cox, the CEO of Radiator Labs. While not yet profitable, as a venture capital-backed company Radiator Labs is focused on scaling its business, said Cox. The company expects to triple its growth by the end of 2023, Isaacs said.

Such demand growth is common among heating-focused proptech companies as larger real estate corporations take notice of the value of cutting costs through efficiencies. Case in point: eSight, a division of real estate and investment management software provider MRI.

“eSight is an energy management software platform, and we work with organizations all over the world and in different industry sectors to manage and reduce their energy costs for carbon or GHG [greenhouse gases],” said Janie Jefferies-Freer, formerly CEO of eSight Energy, and now vice president of energy management solutions for eSight since its acquisition by MRI in November 2021.

“In the commercial office space, there are some very quick wins that we often see,” she said. “For example, the startup and shutdown times of heating and cooling in a building. Are these systems working in harmony with each other? From that little thing we can see savings in office spaces that run into thousands [of dollars] annually.”

Citing what has become an exploding heating cost crisis across Europe and North America, Jefferies-Freer said that demand for eSight’s work has not only grown across companies but is rising to the highest executive levels of concern. “Suddenly, we’re finding this massive surge of people who never really cared at board level asking about, ‘What’s been done to address this in our organization?’ ” Jefferies-Freer said. “And we have seen a huge surge in interest, users and engagement in the last six-plus months, more than we’ve ever seen. It’s inundating us with requests for help and assistance.”

As for what cost savings eSight has provided, Jefferies-Freer said the company provides significant and faster than usual ROI for institutional property owners.

“When companies put in our energy management system, they can see their ROI payback within months, not years,” she said. Jefferies-Freer cited eSight’s work with Raleigh, N.C.-based office REIT Highwoods Properties, which she says has saved $15 million since starting to work with eSight in 2011.

Beyond commercial real estate, universities such as Texas Tech have seen $2.5 million worth of annual savings as an eSight client, Jefferies-Freer said.

“And you can quote those numbers. I mean, it’s big stuff, right?”