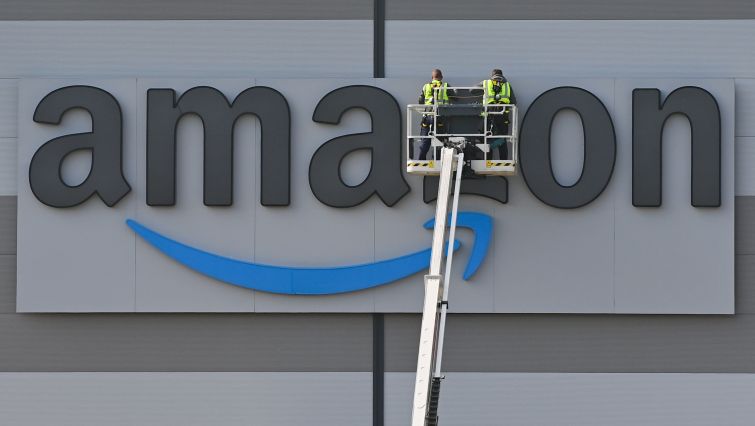 Craftsmen work on the Amazon logo at a shipping warehouse. dpa/picture alliance via Getty Images

Amazon fulfillment center workers at a warehouse south of Albany voted against joining the Amazon Labor Union (ALU) on Tuesday, as the ALU faces off against the e-commerce giant in a historic unionization battle.

Of about 949 eligible full- and part-time staffers at the 1835 U.S. Route 9 building in Castleton-on-Hudson, 206 voted in favor of forming a union with 406 against, according to the National Labor Relations Board (NLRB), the federal agency charged with overseeing the election.

The rejection comes six months after the first successful union drive in the U.S. for employees of the retail behemoth in Staten Island, where workers voted to join the grassroots ALU, headed by president Chris Smalls, a former Amazon employee.

Proud of the brave workers of ALB1 regardless of todays results taking on a Trillion dollar company can never be a loss for workers. We will continue to empower all workers to give them the right to unionize. You miss 100% of the shots you don’t take! W.G. #AlllaborWinter ✊🏽

The ALU hoped to score higher wages and safer working conditions at the warehouse in Castleton-on-Hudson, after employees described getting injured and concussed on the job, The Washington Post reported. Amazon recently raised its starting wage from $15.70 to $17 an hour at the site, according to The Post. And an Amazon spokesperson said the company would “continue to work directly” with its employees in Albany.

“We’re glad that our team in Albany was able to have their voices heard, and that they chose to keep the direct relationship with Amazon as we think that this is the best arrangement for both our employees and customers,” Kelly Nantel, Amazon’s director of global media relations, said in a statement.

Smalls and the ALU gained national attention after unionizing the JFK8 warehouse in Staten Island as well as launching a larger campaign to unionize the nearby sorting facility LDJ5, the Albany outpost, and most recently the ONT8 Amazon fulfillment center in Moreno Valley, Calif. — where the ALU filed a petition with the NLRB to hold a vote this month. Workers at LDJ5 voted against unionizing in May, and the NLRB has not yet certified that the required 30 percent of ONT8 staffers have expressed interest in voting — the required threshold to hold an election.

The ALU faces an uphill battle, even in victory. In Staten Island, the union has yet to get Amazon to negotiate a contract — a process the retail giant could continue to delay by appealing the result of the election. And, in Albany, the ALU is awaiting an NLRB investigation into 27 unfair labor practice charges the union filed against Amazon over its conduct at the facility, alleging that the retail giant illegally fired workers and prohibited staffers from accessing Amazon buildings during off-duty periods, The Post reported.

Meanwhile, in Bessemer, Ala., the results of a March union election organized by the 80-year-old Retail, Wholesale, and Department Store Union still hinge on 416 challenged ballots. Both Amazon and the ALU have filed objections to the vote, which could result in a third election, further delaying the outcome, according to the NLRB.

Still, the ALU poses a threat to the e-commerce giant, which up until this year had resisted unionization efforts in the United States. The grassroots organization got its start after Smalls led a protest against the facility’s pandemic precautions at Staten Island’s JFK8 facility in March 2020 and was fired days later, which he said was in retaliation for his actions.

Smalls did not immediately respond to a request for comment.