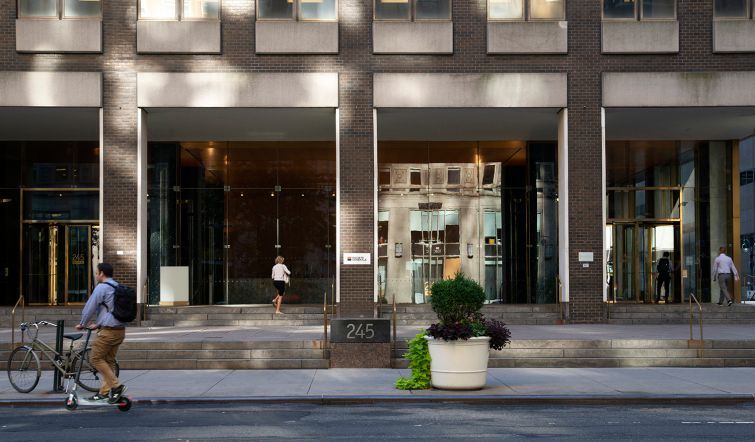 SL Green Realty Corp. has taken over the entirety of 245 Park Avenue, after a protracted legal battle in bankruptcy court with former owner HNA Group.

The real estate investment trust announced Monday morning that it had acquired the 1.8 million-square-foot, 44-story office property and plans to reposition it with the help of architecture firm Kohn Pedersen Fox. The building mortgage and mezzanine loans total $1.8 billion, with a combined fixed rate of 4.3 percent, and mature in 2027.

The renovation will include updating the Park and Lexington avenue lobbies, the Park Avenue plaza, new amenity spaces, food offerings from Daniel Boulud and a new rooftop garden.

In July, a bankruptcy court judge issued a temporary restraining order freezing some HNA assets, forcing the Chinese conglomerate to give SL Green two weeks’ notice if it planned to sell any properties. And in May, the court required that HNA-affiliate and 245 Park owner PWN Property Management pay SL Green $185 million, because SL Green had initially spent $148 million for a minority stake in the property in 2018. HNA originally bought 245 Park for $2.2 billion in 2017. The battle with SL Green was one of many troubles for HNA, which declared bankruptcy in the Chinese courts in January 2021 and completed a corporate restructuring earlier this year. A representative for the Hainan-based firm did not immediately return a request for comment.

Following SL Green’s purchase — which included an equity interest in the property’s mezzanine debt — HNA sued the real estate investment trust and tried to remove SL Green as the property manager. It alleged in court filings that SL Green had failed to replace one of the property’s anchor tenants, Major League Baseball, which would allow the mega-landlord to foreclose on the property. SL Green, meanwhile, argued that HNA was at fault for not renovating the 1960s high-rise, which kept potential tenants away.

“245 Park Avenue is perfectly suited for our portfolio, strengthening our dominant presence in the Grand Central/Park Avenue submarket with one of the best buildings on Park Avenue,” said Harrison Sitomer, SL Green’s chief investment officer. “The property represents the next major development project for SL Green following the extraordinary success of One Vanderbilt Avenue and completion of One Madison Avenue that continues to be on-budget and on-time for delivery in November 2023.”