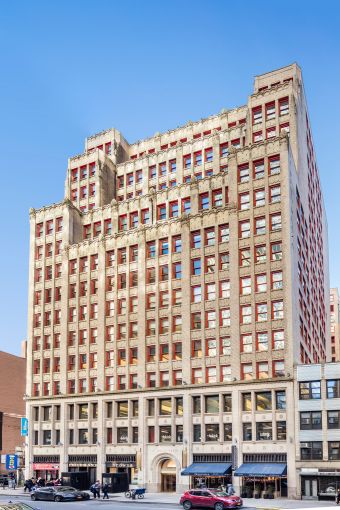 Giaume and his business partner Ed Shahin are still searching for a name for their new restaurant, but Giaume said he plans to turn the former handbag store into a “fun, casual, but chic” eatery that will feature Japanese- and Korean-inspired dishes and open in spring 2023.

“One of the things [we] really wanted to do was bring back the idea that going out is meant to be an experience,” Giaume said. “When dining out in New York, you really get to be transported someplace else and have an experience that you wouldn’t have anywhere else.”

The duo landed on the property — located near Penn Station and Madison Square Garden — rather than chasing trendier neighborhoods like Tribeca or SoHo because they wanted the eatery to be accessible for both tourists and New Yorkers in need of a meeting spot for their friends scattered across the city, Giaume added.

But the restaurant should get plenty of traffic from local residents and the 432,000-square-foot building’s tenants, including TPG Architecture, software company Chegg and research firm NPD Group, said Masonre’s David Abrams, who brokered the deal for landlord Vanbarton Group.

“The restaurants on the 31st Street side are doing very well,” said Abrams, who represented Vanbarton with Eliot Goldschmidt and Newmark’s Brandon Miller. “There’s a good opportunity for outdoor seating, and being sandwiched between Madison Square Garden and Nike’s headquarters at the base of an office tower helps.”

Giaume and Shahin did not use a broker in the deal.