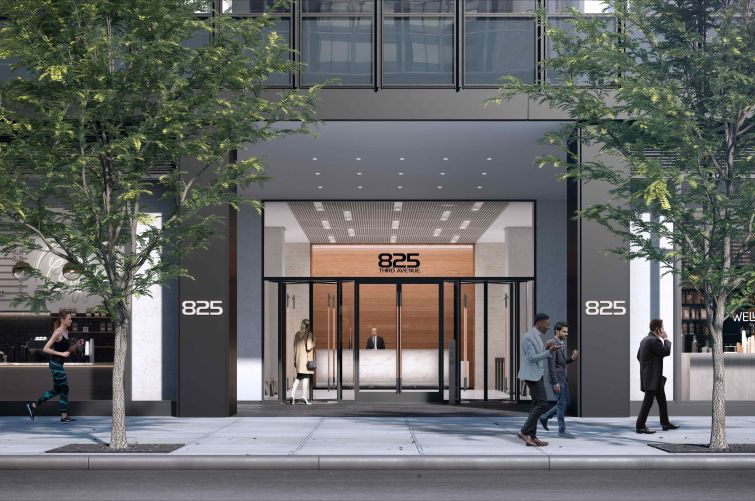 The entrance and lobby of 825 Third Avenue are getting a complete revamp. Image: Durst Organization

The National Bank of Egypt will relocate its New York City offices to the Durst Organization’s 825 Third Avenue in Midtown, Commercial Observer has learned.

The bank signed a 10-year lease for 12,278 square feet at 825 Third. It will be a downgrade in size from its current 15,000-square foot headquarters at 40 East 52nd Street, but the bank had little choice since its old home is being redeveloped, according to tenant broker Newmark.

“With building upgrades that focus on building performance, tenant comfort, modern aesthetics and operational efficiency, the new office provides both value and prestige,” Newmark’s Fred Smith, who represented the tenant alongside Thomas Burrus, said in a statement.

Durst recently landed a $100 million loan from JPMorgan Chase Bank on the 40-story Emery Roth-designed office tower, and the three-year term should help the landlord complete its $150 million renovation of the property.

“We welcome Bank of Egypt to 825,” Tom Bow, executive Vice-President of leasing at Durst, said in a statement. “825’s repositioning has transformed a mid-century classic into a market leading 21st century state of the art trophy that attracts New York’s most prestigious tenants.”

The facelift will give the tenants new amenity spaces, an upgraded entrance and lobby, and earn the building a LEED Gold certification, Commercial Observer previously reported. Most notably, Durst installed special windows that can play videos and be used for video conferencing or presentations, with each panel costing about $50,000.

It’s unclear who brokered the deal for the landlord.