More projects, especially in the West, are sprouting; but the tallest apartment building remains in Brooklyn 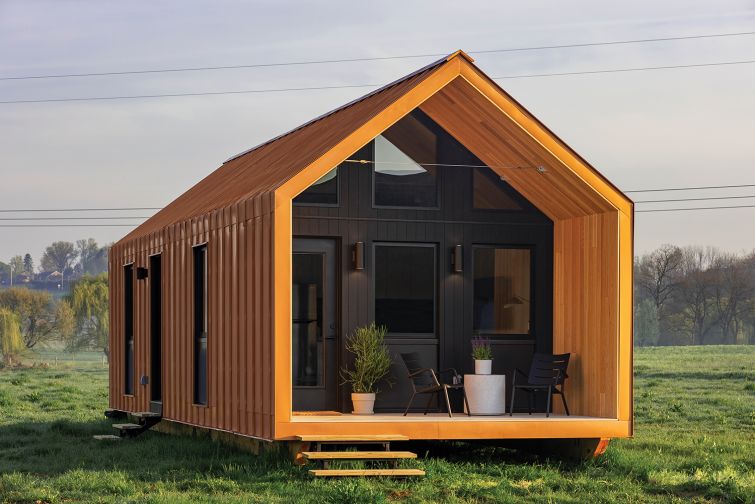 An example from LiV Connected of the advances in modular construction in just the past few years. Photo: LiV-Connected

Six years ago, 461 Dean Street — then and now the nation’s tallest modular apartment building at 32 stories — opened its doors on Flatbush Avenue in Prospect Heights, Brooklyn. The 363-unit tower had been plagued with four years of delays, lawsuits and leaks, and disputes with the project’s contractors almost derailed construction completely.

Despite 461 Dean’s troubled history, low-rise modular construction has expanded quickly over the past few years in the Western U.S. and Canada, serving areas where detached homes and three-story apartment buildings are the norm. Some cities and states are even hiring modular builders to provide temporary relief housing in the wake of hurricanes, floods and tornadoes, instead of the much-maligned FEMA trailers. Modular accounted for about 5.5 percent of the North American construction industry last year, or roughly $200 billion worth of construction starts, according to the Modular Building Institute, a trade group.

Rising labor costs and tighter supply chains seem to have pushed demand for modular projects even higher during the pandemic. Modular contractors typically source most of the building components and fixtures — from sinks, tiles and toilets to walls and appliances — and assemble them at a factory before shipping them to a construction site.

Some projects involve putting together entire rooms or apartments, dubbed modules, and shipping them on a flatbed truck. Many modular contractors also build walls — with installed electrical wiring and plumbing — that can be packed flat on smaller trucks and then connected to other pieces on-site.

Using preassembled modules and panels can dramatically speed construction of a building, allowing a developer to save time and labor costs compared to traditional construction. Modular also consolidates the burden of ordering finishes, fixtures and construction materials under one roof, rather than pushing it onto general contractors and their subcontractors.

Steve Glenn, the CEO of modular construction firm Plant Prefab, explained that his firm uses a hybrid system with both panels and modules, particularly for multifamily buildings.

“Modules are great because you can save on time, you can take advantage of lower labor costs, and you can avoid weather delays [from traditional construction],” he said. “The downside of modules is that they’re very expensive to ship. There’s a lot of redundant structure. It’s very hard for the multifamily folks to maximize the number of units and floor plans because of that. They look more to panels as a prefab solution. Panels have more structure so you can solve design problems more elegantly. The challenge with panels is that you save on framing and insulation but you still have to do cladding, drywall, paint on-site.”

He said that Plant Prefab often builds modules for more complex rooms, like kitchens and bathrooms, and uses panels for rooms that tend to have fewer finishes and utility lines, like garages, hallways, bedrooms and living rooms.

Plant Prefab has two modular factories in Southern California and is building a third, which will be 100 percent solar-powered, according to Glenn. Currently, both factories combined can produce 25 to 35 units annually, but with the new, larger facility, the three factories will be able to produce 800 per year. Plant Prefab closed its Series B funding round in the summer of 2021, with $30 million in financing from Brazilian steel producer Gerdau, the Amazon Alexa Fund, Obvious Ventures and Paris Ventures.

The company’s tallest projects rise about four stories. Its recent developments include a 16-unit student housing project in Berkeley, Calif., a six-unit townhouse project in the Atwater Village section of Los Angeles, 38 single-family homes near Lake Tahoe, and 31 A-frame cabins at Winter Park Resort in Colorado. Plant Prefab is also working on its largest project to date in Moab, Utah: a 500-unit residential development with a mix of rentals and for-sale townhouses.

While most modular builders choose to avoid high-rise construction, Andrew Staniforth of Assembly OSM wants to tackle the engineering problems head-on. The Forest City Ratner alum worked on 461 Dean Street and brought part of the construction and design team with him to Assembly, a relatively new modular construction startup. Founded in 2019 by SHoP Architects principals (and twin brothers) Chris and Bill Sharples, Assembly closed its $38 million Series A funding round in July, led by Fifth Wall’s climate tech fund.

The company’s focus will be on 10- to 30-story buildings in pricey cities like New York. Outside of the five boroughs, Staniforth is considering projects in Los Angeles, the San Francisco Bay Area and St. Louis.

Assembly plans to differentiate itself not only by building taller, but also by using the tools of aerospace and automotive engineering to design buildings.

“So 461 Dean Street was designed and modeled using the tools of architecture,” he explained. “We produced drawings for that building back in the day, and then those drawings went to the factory. Those drawings only captured 30 to 40 percent of the information.” Now, rather than using traditional architectural design software like Revit, “we use a software platform called Catia. It’s what Boeing uses to design their airplanes, and it’s what Tesla uses to design their cars. So we can be much more precise and there’s no scope gap.”

Assembly also tapped engineers from Boeing, SpaceX and Tesla to help oversee the design and manufacturing of 461 Dean’s modular units, in an effort to bring more technical know-how into the preconstruction process. In addition, the firm leverages multiple suppliers for both individual fixtures and entire modules, which makes it easier to navigate the kinds of supply shortages or delays that have become commonplace since 2020.

“In the event that something goes wrong — which it often does — we can continue the project with a different supplier for steel or bathrooms,” said Staniforth. He added that while Assembly  has a small assembly facility in New Jersey, that facility receives complete modules or panels and simply pieces them together before shipping them off.

“Rather than receiving pipe, tub and toilet, we receive a complete bathroom,” he said. “We have a factory, but it’s just clipping things into place.”

Staniforth argues that modular construction is cheaper in the long run, and allows developers to reduce the amount of concrete and steel necessary for construction. By extension, that means their modular projects would have a smaller carbon footprint — in theory at least — than a mid- or high-rise building with traditional concrete slabs and conventional steel framing.

“In today’s interest rate environment, the speed of delivery is so important,” Staniforth said. “The faster you finish construction, the quicker you can turn off your high-interest construction loan. So, if you can shave 30 to 50 percent off a project’s construction time,” it can lower the overall construction cost.

SHoP Architects isn’t the only architecture firm with its own modular construction startup. DXA Studio founders Wayne Norbeck and Jordan Rogove recently launched their own modular firm, dubbed Liv-Connected. Their strategy is similar to Plant Prefab’s, because they plan to use a hybrid approach called “component-linked construction” (CLiC). They build and ship kitchens and bathrooms as complete modules, and flatpack smaller components such as porches, walls and headboard modules. The CLiC system can be expanded into three or four bedrooms, or it can be stacked to create a three- or four-unit townhouse.

Norbeck and Rogove are working on a number of projects, including disaster-relief housing efforts in Texas and Maryland, cabins designed for senior living in Pennsylvania, and eco-resorts in upstate New York. Their options include a customizable 500-square-foot house dubbed the “Conexus Home,” which starts at $150,000 and can be expanded to multiple units. Then there’s the Via, a tiny home on wheels with some customizable finishes and a few exterior wall and roof options. Pricing for that model starts around $90,000.

“You can select a suite of colors for the interior and start an order form to purchase these,” said Rogove. “You cut out all the hiring and the architect. We love the idea that we have a kit of design that we can share with a much larger audience than we’d have as architects. We try to consolidate all of that coordination in as much time as possible. So, theoretically, you could get something done in half a year versus two or three years.”

DXA manufactures the components in Lititz, Pa., in a factory called Atomic that primarily makes sets for live events.

“I used to design [the sets for] ‘MTV Unplugged’ and the VMAs, and we would build them in Lititz,” said Rogove. “They had a couple hundred employees who were sitting on their hands when live entertainment stopped during the pandemic.” So he approached them about building tiny homes instead.

The pair is also working to customize their tiny homes and cabins for the elderly and other people with mobility problems.

“We love the idea of aging in place and being able to adjust the counter heights — the necessity of being able to adjust rather than selling your place,” said Rogove. Their partner, Joe Wheeler, an architect who teaches at Virginia Tech, has developed adjustable countertops and toilet seats aimed at helping seniors make their homes more comfortable.

Overall, they feel their hybrid approach to modular homes will allow them to avoid the pitfalls of projects like 461 Dean Street.

“When you’re shipping a module, it was about what size you could get on a truck,” said Norbeck. “Since we ship them in pieces we have more options. With the volumetric ones, they might leave the factory with precision, but then once you put them on a truck or a boat they might get torqued or shear.”

As Staniforth noted, these kinds of alignment problems tend to grow once fully assembled modular units are stacked.