Plans for the 620,000-square-foot studio lot include four soundstages and a six-story creative office 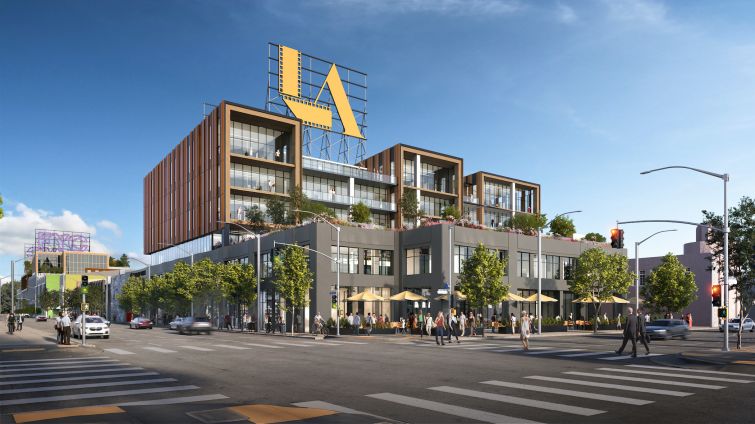 The 6.4-acre campus spans two city blocks and is one of the largest development sites in Hollywood. Echelon Television Center

Companies like Netflix and Disney are fighting the streaming wars with their pocketbooks, each budgeting billions of dollars a year to make new content, and developers are hoping to take advantage.

To tap into the blitz on soundstages and production space, the new owners of the historic Television Center in Hollywood announced plans this week to transform the site into a $600 million, 620,000-square-foot studio campus. David Simon’s BARDAS Investment Group and Boston-based Bain Capital will rebrand the property as Echelon Television Center, adding to the JV’s $450 million Echelon Studios project about a mile away.

The owners acquired the Television Center property at 6311 Romaine Street for $134.1 million in March, property records show. That’s more than double what BLT Enterprises paid for the property in August 2020.

The 6.4-acre campus spans two city blocks and is one of the largest development sites in Hollywood, bordered by Santa Monica Boulevard to the north, Cahuenga Boulevard to the east, Willoughby Avenue to the south and Cole Avenue to the west. Plans for the new studio lot include replacing a parking lot and two dilapidated buildings with four soundstages, and a new six-story creative office building with ample private outdoor terraces.

The existing facility that once served as Technicolor’s headquarters as well as the studio lot for Metro Pictures Corporation (which became MGM) was built between 1930 and 1966, and includes approximately 183,000 square feet of creative office and studio space. Technicolor’s processing lab handled classics including “The Wizard of Oz,” “Singin’ in the Rain” and “The Godfather, Part II.”

“This project represents our company’s continued focus on redeveloping infill product for the entertainment and media industries in the content capital of the world,” Simon said. “The old home to Technicolor and Metro Pictures represents another great opportunity to keep ‘Hollywood in Hollywood.’ ”

Bain Capital and BARDAS formed a joint venture in 2019 to pursue opportunities to acquire, renovate, develop, and operate creative office and other production space, with a focus on the key content submarkets in Los Angeles. To date, the joint venture has invested in and has a pipeline of existing and new development projects encompassing more than 1.5 million square feet.

The former Television Center project — not to be confused with Hackman Capital Partners’ $1.3 billion Television City studio redevelopment — adds to the era-defining wave of new soundstages and production space development entering the market the past few years.