Future of Capital Markets brought to you by Ariel Property Advisors 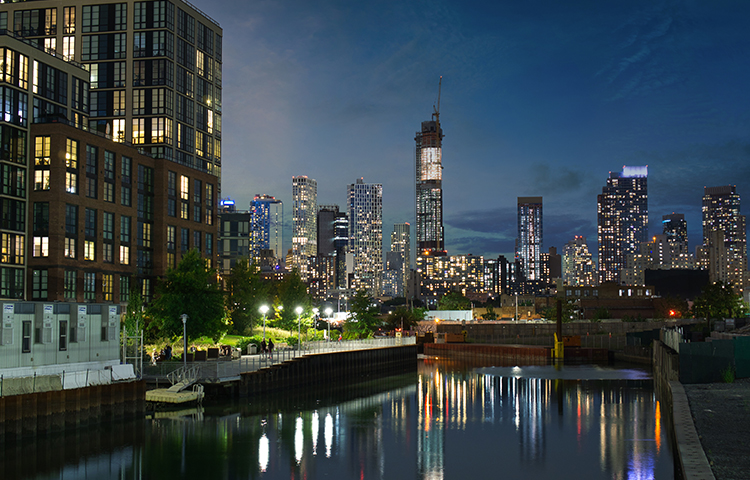 In the first half of 2022, investment sales in Brooklyn totaled $5.6 billion, of which multifamily buildings captured nearly $2.7 billion of the transactions, according to Ariel Property Advisors’ Brooklyn 2022 Mid-Year Commercial Real Estate Trends report. Development sites, primarily for multifamily projects, accounted for another $773 million of the total sales. In fact, eight of the top 12 transactions over $50 million in the first six months of the year were either for multifamily buildings or development sites where multifamily projects are planned.

Sean R. Kelly, Esq., partner in investment sales at Ariel Property Advisors, has specialized in the Brooklyn market for more than 13 years. He is particularly active in Gowanus, where this year he has arranged the acquisition of two development sites — one, a $21.6 million joint venture for a property with a 102,035-square-foot zoning floor area at 125 Third Street, and the second, a property with a 142,500-square-foot zoning floor area at 450 Union Street, which traded for $40.65 million or $285 per BSF, a record for a site in Gowanus with a Mandatory Inclusionary Housing requirement. He also has another development site and a commercial office building under contract in Gowanus.

Kelly discussed trends in Brooklyn’s multifamily and development markets and how the Gowanus rezoning will change the borough.

CO: What were the drivers behind investor demand for multifamily assets in Brooklyn in the first half of the year?

Kelly: Institutional capital is no longer bound by the river and bridges and has recognized that there are core investment grade assets in Brooklyn. The borough’s population jumped by over 230,000 residents between 2010 and 2020 to 2.74 million. With a massive influx of renters and limited supply of housing, rents in free market buildings have spiked to all-time highs.

Downtown Brooklyn, which is New York City’s third-largest central business district, has evolved into a 24/7 “Live, Work and Play” neighborhood with more than 18,460 new apartments built since the area was rezoned in 2004. Young working professionals and families are drawn to Downtown Brooklyn and the adjacent brownstone neighborhoods, while young people looking for the “it” factor are gravitating to the Northeast Brooklyn neighborhoods of Williamsburg and Bushwick.

Although rents in these neighborhoods have risen in the past 10 years, they are still a slightly less expensive alternative to some parts of Manhattan. But many renters and buyers today are choosing Brooklyn over Manhattan because the borough offers quality public, private and charter schools, some of New York City’s best restaurant fare, and a wealth of green space including Prospect Park, Brooklyn Bridge Park, Fort Greene Park and the Williamsburg waterfront.

One interesting trend we’re seeing, however, is multifamily developers are moving farther into Brooklyn along the subway lines. The greater the distance from Manhattan, the less expensive the land, which is making rental housing development in these areas more attractive. Renters are following and moving into neighborhoods such as Prospect Lefferts Gardens, Flatbush and Midwood in search of more affordable housing.

The Gowanus Neighborhood Plan was approved by the City Council in November 2021. What does the plan include?

The Gowanus rezoning will enable the development of 8,500 new units of housing in the neighborhood, including 3,000 permanently affordable homes with 2,000 governed by the Mandatory Inclusionary Housing program. Supporting investments include $250 million for a waterfront park along the Gowanus Canal, an upgraded drainage infrastructure to alleviate flooding, and community amenities. An additional $200 million will be allocated for capital improvements to the NYCHA housing in the community.

As part of the rezoning, both sides of 4th Avenue were upzoned to R9, allowing greater density. A previous upzoning during the Bloomberg Administration restricted zoning on 4th Avenue to R8A.

What impact will the Gowanus rezoning have on Brooklyn?

The Gowanus Neighborhood Plan will produce the most popular and dynamic market in all of New York City. It will connect the brownstone neighborhoods west of the canal to Park Slope, and the required access to terrific green space along the Gowanus Canal will be an added community benefit.

This rezoning is the most comprehensive and well-thought-out plan that the city has ever seen and will succeed because it incorporated nearly a decade of community input with thousands of community members participating in over 100 hours of meetings and workshops.

The formal public review process began on April 19, 2021, and impressively, community discussions and the approval process continued via Zoom sessions during the COVID-19 pandemic, which enabled the plan’s adoption on Nov. 23, 2021. With each major rezoning, the city’s plans have gotten progressively better. City Planning and community input produced a rezoning that requires affordable housing, infrastructure improvement, mandatory public access to open and green space, the preservation of some manufacturing, and incentives for creative space.

Will the expiration of the Affordable New York/421a tax incentive on June 15, 2022, stall development in Gowanus?

When the Department of City Planning released the Framework for the Gowanus rezoning, it was very detailed. It allowed owners of development sites to develop plans based on the anticipated zoning. Some owners and developers even submitted plans to the Department of Buildings prior to the final adoption of the rezoning last year. Once adopted, these landowners were able to file their plans quickly, which enabled them to “commence construction” in order to be eligible for the 421a tax abatement. Developers saw the success of multifamily projects in Gowanus such as 363 and 365 Bond Street, which was completed over five years ago, and made big bets on the area.

That said, we did see development site sales surge in Brooklyn during the first quarter of this year as developers in Gowanus and across the borough rushed to close on properties in time to qualify for the 421a program before its sunset in June. The last time the 421a program expired in 2015, the city saw a surge in the number of permits issued for new residential projects before the program ended and a decline after. It would be unfortunate if residential development slows because there is a projected need for 560,000 new units of housing in New York City by 2030, according to a REBNY study, so this isn’t the time to impede new multifamily development.

High construction and operating costs (including property taxes) in New York City as compared to other major U.S. and international cities make it difficult to build affordable housing here without tax incentives or other subsidies. And additional costs incurred from rising interest rates will place an additional burden on new construction.

What development projects are currently planned for Gowanus?

There are a number of developers already very active in Gowanus. Domain Companies recently secured financing for two projects, one 20 stories and other 15 stories, at 420 Carroll Street with access to the Gowanus Canal promenade. Of the 360 units, 25 percent will be designated as affordable housing, available to households at 40 to 100 percent area median income (AMI). Amenities will include coworking space, a resident lounge, multiple outdoor spaces, a fitness center, a children’s playroom, and bike storage.

Jonathan Rose Companies, The Hudson Companies, The Bluestone Organization and Fifth Avenue Committee have joined forces to develop Gowanus Green, a sustainable mixed-use community with 1,000 permanently affordable homes, a new public school and new park that will be built on city-owned land along the Gowanus Canal.

Finally, Monadnock Construction is planning a six-story 100,000-square-foot industrial, office and retail project at 300 Huntington Street, just south of the city’s Gowanus rezoning area beneath the elevated F and G trains on the Culver Viaduct.

For more articles on the future of capital markets click here