Hochul Lifts Mask Mandate on Subways to ‘Restore Some Normalcy’

The move comes after many companies started calling their workers back to the office after Labor Day. 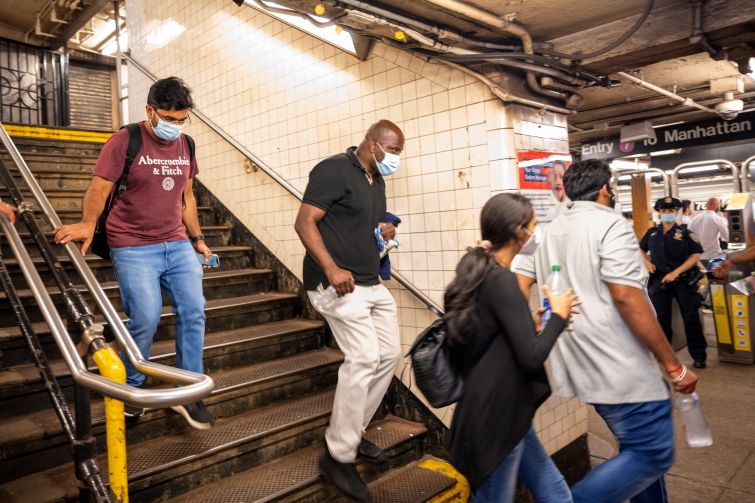 The Metropolitan Transportation Authority’s more than 2-year-old mask mandate on subways, commuter trains and buses is officially no more than “optional.”

Gov. Kathy Hochul, who exerts executive control over the state agency, told New Yorkers on Wednesday that a face covering will no longer be enforced on MTA subways, buses and trains. The announcement came during a briefing on her administration’s ongoing response to COVID-19.

“We have to restore some normalcy to our lives,” Hochul said during the briefing. “Basically, we’re going from mandatory to optional.”

The MTA did not immediately confirm whether the mask mandate would continue for MTA employees.

Hochul’s lifting of the mask mandate comes as dozens of companies in the city, especially on Wall Street, began calling workers back into the office more regularly. These include Goldman Sachs, which removed all of its COVID-19 restrictions in its offices, a move seen by some as a push to get all employees to return five days a week.

”In addition to students, we’re obviously welcoming back workers, whether they’re full-time, part-time, hybrid,” Lieber said. “There’s no conformity here, it’s all about personal choice.  Personal choice is the watchword. Now masks are gonna continue to be available at all of the subway — I still call them token booths. The station agents will have those.”

The mask mandate was put into effect in April 2020 after the COVID-19 pandemic started to become a serious issue for the agency which began to lose a disproportionate number of employees to the virus. Up to 174 transit workers had died of COVID-19.

Prior to April 2020, as the spread of the disease ramped up, the MTA stated it was following health recommendations and resisted calls for a mandate — a major point of contention between the agency under the leadership of former Gov. Andrew Cuomo, former chairman Patrick Foye and union leaders, particularly Transport Workers Union Local 100.

After an alarming number of workers fell ill and dozens died, the agency came to fully embrace a mask mandate, even enacting $50 fines enforced by the New York City Police Department and MTA Police for riders not wearing a mask.

The agency turned to posters and handed out free masks to riders, but debate around the efficacy of the mandate persisted, especially as law enforcement officers themselves were commonly spotted without face coverings.

State leaders stuck with the mandate months after the Centers for Disease Control and Prevention lifted its rule requiring masks on public transit in April.

In June, the MTA removed the posters informing riders of the requirement. During a Tuesday press conference showcasing new ceiling heights in Pennsylvania Station, Hochul let slip that the mandate would soon be a thing of the past.