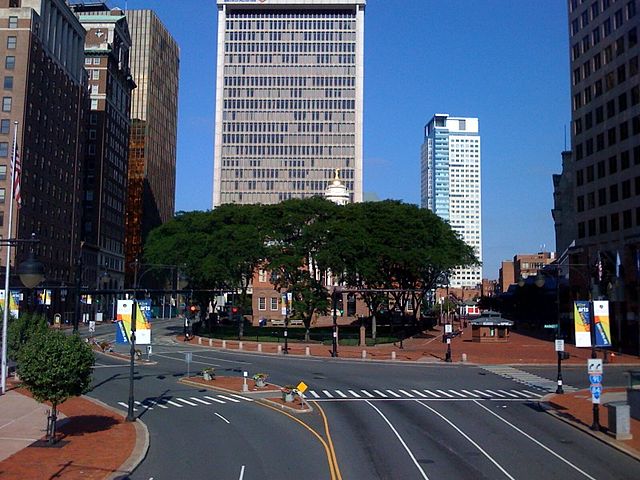 An $87.55 million loan secured by the State House Square office property in Hartford (pictured) was resolved with a 54 percent loss severity.  Photo:WikiCommons

“Of the 26  total workouts, only eight of the assets were resolved without a loss. Of the 18 workouts resulting in losses, severities for the month of August ranged from one percent to greater than 100 percent, based on outstanding balances at disposition.

“Five of the nine lodging workouts incurred losses, including Value Place Williston, a 248-key extended-stay hotel in North Dakota that has been real estate-owned (REO) since 2017 and had an outstanding debt of $17.2 million. The  property was liquidated with a 100 percent loss  severity based on the outstanding debt amount.

“The resolution of the WPC Department Store Portfolio loan represented the largest loss, by dollar amount and loss severity, among all distressed workouts last month. The  liquidation alone accounted for  roughly 30 percent of the total realized losses for the month.

“The WPC Department Store portfolio consisted of five REO-anchored retail boxes attached to various regional malls. A sixth anchor box was previously sold in 2020.  Outstanding debt for portfolio totaled $55.3  million but realized losses upon liquidation were in excess of the loan balance and resulted in a loss severity of 111.6 percent based on the balance at disposition.

“The largest workout by outstanding debt  amount was the $87.55 million State House Square loan, which was secured by an 837,225-square-foot office property in Hartford, Conn. The loan had been with the special servicer since March 2019 and was resolved with a 54 percent loss severity.

“Excluding defeased loans, there was approximately $5 billion in securitized debt that was paid off or liquidated in August, which was a slight increase compared to $4.7 billion in July 2022. “In August, 7.7 percent of the loan resolutions were categorized as dispositions, liquidations or discounted payoffs. The percentage of distressed workouts was 7 percent in the previous month. Approximately 15 percent of  the loans were paid off with prepayment  penalties.

“By property type, multifamily had the highest total of outstanding debt payoff in August with 27 percent of the total by balance. The  relatively higher percentage of multifamily debt payoff was driven by several maturities for loans securitized in commercial real estate collateralized loan obligation transactions.