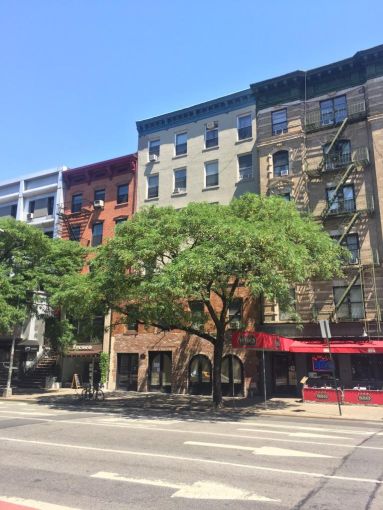 It seems like the path to evicting an unwelcome tenant is paved not with good intentions, but with dog scat.

Proprietors of the upscale French restaurant Brasserie Saint Marc claimed their landlord, nonprofit The Organization for the Defense of Four Freedoms for Ukraine (ODFFU), repeatedly harassed their staffers and even went as far as smearing dog feces on one of the eatery’s owners in a campaign to get Brasserie Saint Marc to give up its 136 Second Avenue outpost, according to a lawsuit filed in New York County Supreme Court Wednesday.

Brasserie Saint Marc wants ODFFU to pony up more than $3 million in damages for allegedly delaying the restaurant’s renovations, scaring off some of its workers, disabling its security cameras and physically attacking one of its owners twice, according to the suit.

Brasserie Saint Marc, its lawyer and ODDFU’s lawyers did not immediately respond to requests for comment.

The eatery’s owners — model and actress Karin Agstam and her husband Greg Lebedowicz — first leased the 5,000-square-foot restaurant in 2014 and spent five years with executive chef Frederick Piccarello outfitting the East Village storefront with a bar, a pair of dining rooms and an outdoor garden.

Brasserie Saint Marc opened in 2019 serving up classic French fare and getting plenty of acclaim for its decor.

But the restaurant still hasn’t nabbed its final certificate of occupancy — which it needs for ODDFU to reimburse them for repairs to the building — and has been able to operate with only a temporary one.

It blames ODFFU for the delays because the small nonprofit refused to sign the necessary paperwork for the application and instead tried to drive Brasserie Saint Marc out of the space by complaining to the New York City Department of Buildings (DOB) the restaurant was a “squatter,” according to the suit.

The battle came to a head in September 2020, when one of the landlord’s employees allegedly smeared dog feces on Lebedowicz’s chest, heat-butted him and then shoved him while he was on the phone outside the restaurant, according to court records. The suit claims the employee was charged with third-degree assault and aggravated harassment for the attack.

The New York City Police Department did not immediately confirm the arrest.

In the year that followed, the landlord refused to give Brasserie Saint Marc’s staffers its mail, disabled the security cameras and changed the locks on the building’s two entrances, the suit claimed. The same unnamed ODFFU employee allegedly attacked Lebedowicz again in February 2021, this time with a retractable baton in front of two restaurant workers, resulting in more misdemeanor legal charges.

The harassment caused at least one of Brasserie Saint Marc’s staffers to quit and fewer patrons to visit the eatery, the suit claimed.

Brasserie Saint Marc claims its business was also hampered when ODFFU erected emergency scaffolding around the premises after concrete stucco started falling off the building in July, according to the filing. There are 17 open violations on the building, including one that details falling concrete, according to DOB records.

Meanwhile, Brasserie Saint Marc and ODFFU have become ensnared in a lengthy legal battle over unpaid rent. ODFFU sued the eatery and Lebedowicz three times in the past year, alleging the restaurant owes between $60,000 and $705,102 in unpaid rent, though attorneys for ODFFU have withdrawn the three cases, according to court records.

Brasserie Saint Marc’s lawsuit claimed the rent dispute cases failed to acknowledge the lease agreement that lowered its rent thanks to its investment in the property.

Despite the alleged harassment, the owners don’t want to ditch the space and said in court records they would cure any defaults to stick around.