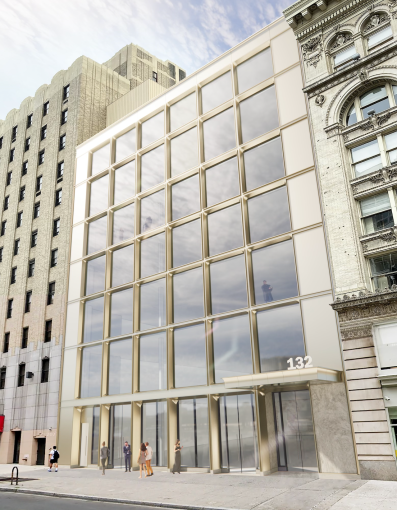 A unique value opportunity to convert an older Greenwich Village building into a modern Class A office asset in the shadow of Google’s New York City headquarters proved to be a big attraction for Thorofare Capital to tackle a $34.5 million financing at 132 West 14th Street.

The Los Angeles-based lender supplied the debt package to KPG Funds for a refinance and construction loan of the seven-story property it acquired in 2021. KPG plans to transform the office and retail office property with a new structural expansion featuring enlarged 15-foot ceiling heights on the top two floors along with a new façade designed by Marvel Architects.

David Perlman, head of Thorofare’s New York office, noted that the location near Google will help attract top technology and media tenants seeking modern amenities. Asking rents are expected to start between $90 and $95 per square foot, which is on the low end of other planned office properties in the neighborhood.

“They are offering turnkey prebuild space at a lower price point than other comparable deals in the market,” Perlman said. “We’re underwriting between $85 and $100 a foot for basically a new building.”

The starting asking rents at 132 West 14th compare to a $115-per-square-foot average rent at  nearby 76 Eighth Avenue, an office building that, according to Perlman, is already 100 percent leased before even receiving its certificate of occupancy. Perlman also noted that another nearby office property at 60-74 Gansevoort Street has starting rents of $133 per square foot. MatchGroup, which owns dating websites Match.com, PlentyOfFish, Tinder and Hinge, signed a long-term lease in June 2020 at the Gansevoort Street site.

Perlman added that in addition to the proximity to Google, the property — also known as La Galerie — has solid public transportation access near the L train and express bus routes. He noted that the cost basis on the deal is low compared to other properties at less than $1,000 a foot even when factoring in a 99-year ground lease KPG signed last year with the Salvation Army, the building’s previous owner.

KPG’s business model is aimed at purchasing aging “architecturally significant” buildings and converting their office space into Class A properties.

“La Galerie will leave the market in awe,”  Rod Kritsberg, KPG’s founder and CIO, said in a statement. “It will be completely rebuilt from the ground up with KPG’s signature luxury interiors, finishes, technology, along with a new architecturally stunning glass façades and one-of-a-kind rooftop amenities with incredible, unobstructed views of the New York City skyline.”