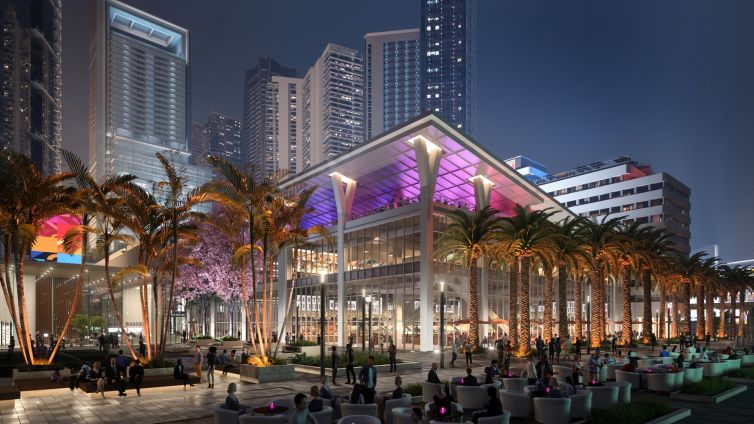 Among the residential towers, a three-floor sports bar is coming to Miami Worldcenter.

Live! Hospitality & Entertainment inked a 20,000-square-foot deal to open its Sports & Social bar concept, which will feature a rooftop with a 53-foot LED screen as its centerpiece. The chain has 13 locations nationwide, including one at the Dadeland Mall.

Miami Worldcenter is one of the largest private developments in the country, spanning 27 acres in the city’s downtown. Most developers with projects at the master-planned development — such as the Related Group, Naftali Group, Royal Palm Companies, and even former WeWork CEO Adam Neumann — are building residential towers.

So far the retail building has clinched 110,000 square feet in deals with Sephora, Lucid Motors, Chicago’s Maple & Ash and etta restaurants, as well as two concepts from Michael Beltran, a Michelin-starred chef based in Miami.

“People are drawn to walkable areas that provide a welcoming environment with beautiful public spaces and a mix of experiences. At Miami Worldcenter we are delivering all of that, and the addition of Sports & Social brings a high-energy and captivating concept,” Shaul Kuba, co-founder and principal of CIM Group, said in a statement.

CIM Group, a master developer of Miami Worldcenter, is leading the retail leasing alongside The Comras Company, which is based in Miami.

Jewel Box is nearly complete with a temporary certificate of occupancy anticipated in the next 60 days, according to a spokesperson for Miami Worldcenter.

A representative for Live! Hospitality & Entertainment did not immediately respond to a request for comment.