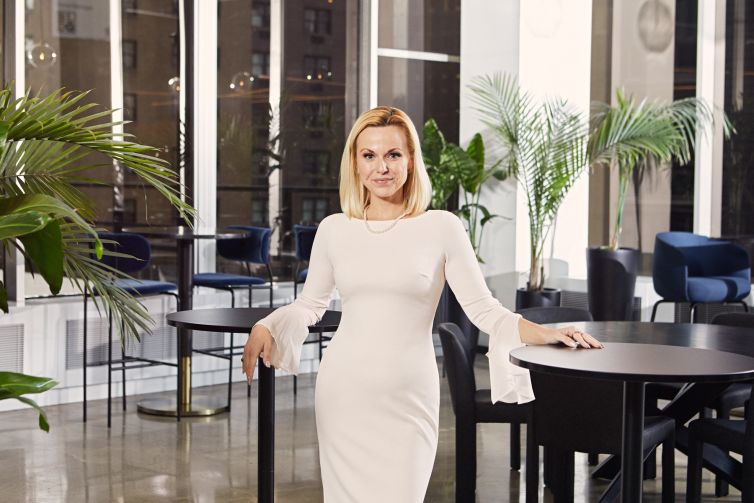 Part of keeping the momentum behind any dynasty is remaining relevant, and that seems to be the case with Crystal Fisher in her latest endeavor.

The daughter of Kenneth Fisher, principal at Manhattan-based developer and owner Fisher Brothers, has spent the pandemic launching Ease Hospitality. It’s a hospitality brand and coworking space that aims to offer clients a place to do business with not only luxury amenities but also technology to prevent the spread of COVID-19

Fisher, who co-founded Ease Hospitality and serves as managing director of the Fisher Brothers’ commercial portfolio, has a front-row seat to the shifting trends in commercial real estate. These trends were moving expectations in the direction of a more hospitality-based experience, even before the pandemic, Fisher told Commercial Observer.

“Hospitality really became the most important topic, and I don’t want to say it was just because of the pandemic, because it wasn’t,” Fisher said. “There was a massive shift a few years back, pre-pandemic, where every landlord sort of paused and said, ‘Let’s look inside our portfolio and see where we can amenitize.’ That’s really where the journey started.”

With 28,000 square feet of space, @Ease 605 at 605 Third Avenue is the second addition to the Ease Hospitality portfolio of facilities offering tenants lounge spaces, a classroom, meeting and conferencing spaces, two large outdoor terraces, an NFT art exhibition and a second location of the brand’s Palm Rose Cafe — all within a building owned by Fisher Brothers.

Ease Hospitality began taking shape in 2017, and gained traction as a business in 2019.  Ease declined to share cost or foot-traffic data, but stated that the facilities were paid for through a $200 million investment in improvements across Fisher Brothers’ entire New York City portfolio.

Now, in 2022, when clients step into @Ease 605, not only are they greeted by plush, open seating and a sun-drenched terrace, but there is also a signature scent and a surprising amount of live vegetation. Ease Hospitality commissioned large sections of walls throughout the space to be covered by panels containing living and breathing moss as part of Fisher’s vision of anchoring all the rooms with greenery.

David Rockwell’s Rockwell Group designed the majority of the interior, as with the first Ease Hospitality location @Ease 1345. That site opened in early 2021 at 1345 Avenue of the Americas and spans 18,000 square feet.

“We were creating initially a work environment that blended the gap between work and home,” Fisher said. “We really understood that people needed to work in a more comfortable way to feel their most productive versions of themselves. It means that when you’ve made your way in and you’re on site and you’re wrapped in a biophilic design that has indoor air quality the same as outdoor air quality, we’re really incorporating five senses at all times.”

Fisher did not disclose the cost of building out the spaces or how much traffic they get from tenants in each building, but the brand is considering external memberships for non-tenants.

Ease Hospitality may be onto a larger trend of investors moving away from the real estate investment trust (REIT) style of simply owning and positioning stable assets. Instead, Ease is moving toward more of a brand investor approach of seeking growth potential and patiently waiting for profits, according to Dror Poleg, author of Rethinking Real Estate: A Roadmap to Technology’s Impact on the World’s Largest Asset Class.

“With the rise of flexible and remote work, employers and landlords need to make workplaces more attractive than homes,” Poleg told CO. “They also need to have systems and services in place to accommodate short-term bookings and hotel-like services. But the biggest convergence between offices and hotels will happen behind the scenes — in the way offices are funded, operated, and structured. Traditional office landlords cannot simply set up in-house businesses to handle the type of marketing and services that tenants now expect.”

The hospitality trend can be seen elsewhere in the coworking world.

In July, Industrious opened a new 15,000-square-foot “flexible work club” at 780 Third Avenue. It includes a lounge, rooms filled with greenery, a 12,000-square-foot publicly accessible indoor park, a full-service bar, a restaurant and a coffee shop. The goal for Industrious was to create a space that fit people’s lives beyond work hours.

Industrious, though, is a 10-year-old startup. Fisher Brothers dates from 1915. It started off investing in residential property outside of Manhattan. In the 1950s, the company began investing in office assets in Manhattan and branched off into construction and management. Today, under the management of cousins Arnold, Kenneth, Steven and Winston Fisher, the Fisher Brothers also have assets in Washington, D.C., and Las Vegas.

“The value that Ease Hospitality has added to our properties is immense. With Crystal at the helm, Ease plays a critical role in aiding the recovery of the New York office market, ensuring that the office continues to be a place that adds value to our tenants’ lives,” Kenneth Fisher, co-managing partner at Fisher Brothers, said in a statement. “As employees make their way back into the office, tenants are actively seeking a more enhanced office experience that incorporates comfortable, hospitality-grade amenities while accommodating the world of remote work. Ease accomplishes this through premium conference venues that provide flexible spaces and state-of-the-art technology, redefining the standard for the office of the future.”

Crystal Fisher, however, did not start out in real estate. She spent 10 years as an Emmy-winning reporter for networks such as PBS and Investigation Discovery. She also served as marketing director for the 2016 Orlando Invictus Games where she worked with Prince Harry, who founded the Invictus Games Foundation.

She now oversees about $200 million worth of capital improvement plans for Fisher Brothers’ core assets and is president of the Avenue of Americas Association, a civic improvement organization that advocates for businesses on Sixth Avenue.

While Fisher spoke of her desire to pass something down to her daughter, she also represents her family as a whole in the endeavor. The Fishers stand alongside other New York City real estate dynasties such as the Dursts, Roses, Rudins and Tishmans.

“You have to be able to stand in front of your product in a different way and really believe in it,” Fisher explained. “What does that mean? I think it means a little more pressure in the beginning, more scrutiny, and so you don’t really accept below-grade.”