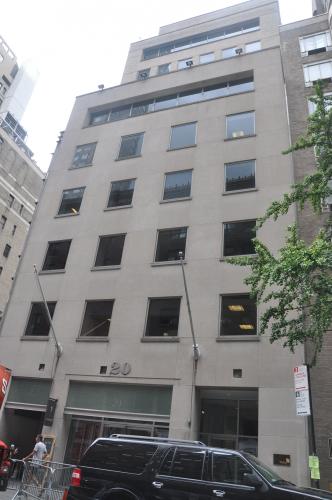 The largest of the four deals is from stock brokerage Auerbach Grayson, which signed a 6,579-square-foot lease on the entire fourth floor, according to landlord broker Newmark. It was represented by Joseph Harkins and Georgio Versea of Cushman & Wakefield. This will be a relocation from its current offices 25 West 45th Street.

Rehs Galleries also nabbed 6,579 square feet on the fifth floor and plans to relocate from 5 East 57th Street. The gallery — displaying work by 19th century painters in the Barbizon, Realist and Naturalist styles — was represented by Woody King, Alan Friedman and Richard Plehn of Lee & Associates. The brokers did not immediately respond to a request for comment.

SOS Capital signed on for 4,462 square feet in the penthouse space, which includes an outdoor terrace. The finance firm was at 1330 Avenue of the Americas and was represented by Ben Blumenthal of Noah & Company. The brokerage did not immediately respond to a request for comment.

In the smallest deal, Calex Partners, an investment bank that guides firms through mergers and acquisitions, signed a new lease for 3,717 square feet on the second floor, and brokered the deal in-house. Calex did not immediately respond to a request for comment, but it appears to already occupy the space.

Newmark declined to provide the asking rents or the lengths of the leases.

The new deals represent about a fifth of the 104,000-square-foot, 14-story Midtown building where Skyline recently renovated its lobby, elevators and HVAC system, according to Newmark.

“As generational owners, Skyline Development is focused on building quality spaces that cater to the needs of today’s office tenants,” said Newmark’s William Cohen, who represented the landlord in all four deals with JD Cohen, Jarad Winter and Ariel Harwood. “This has enabled the building to retain existing tenants and attract new ones.”