The lender closed within 25 days. 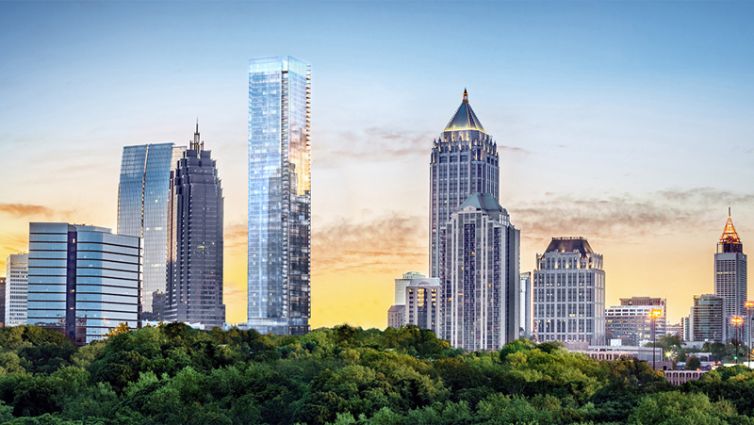 A rendering of the Opus Place development. Credit: Perkins+Will/ via Benmark Capital

The 4-acre development site sits at 98 14th Street NE in Midtown Atlanta, directly across from the Four Seasons hotel.  It will soon be transformed into a 1.8-million-square-foot mixed-use development that comprises a 53-story residential tower— the city’s tallest residential building — commercial space plus a retail component.

Benmark’s two-year loan refinances an existing bridge loan on the Perkins+Will-designed property that was nearing maturity.

“We are pleased to provide a flexible financing solution and leverage our experience in the Atlanta market, which enabled us to complete due diligence and deliver a custom-tailored financing solution in under four weeks,” Mark Simon, founder & CEO of Benmark Capital, said. “This transaction is testament to  our team’s ability to deliver a highly complex commercial bridge loan on an accelerated timetable.”

Closing a loan in 25 days is no mean feat at the best of times, but the current market volatility has created a window of opportunity for more nimble debt funds to step in and execute deals quickly while banks have pulled back and tightened their lending purse strings.

As a result, Simon said Benchmark is finding places to lend at a lower basis than it typically would have in the past — due to the heightened competition in the bridge space — and also deals with better economics.

In this particular scenario, the property’s previous bridge lender gave notice that it wouldn’t be extending its loan, and New York-basd Olympia Heights had under 30 days to close a new loan.

“They came to us because they knew we had the capacity to get this closed, and in short order” Simon said. “From start to finish, within 25 days, we were able to fly down [to Atlanta], see the property, underwrite it, and get all the diligence in order to close this loan on balance sheet.”

More broadly, “bank deleveraging and increased financing costs has made it difficult for borrowers to utilize conventional financing for transitional properties and has created opportunities for agile non-bank lenders like Benmark Capital to fill the void in liquidity,” Simon said.

So far this year, Benmark has closed roughly $100 million in transactions, and expects to close another $100 million through year end, Simon said. Its focus is generally on middle-market bridge lending special situations, what Simon refers to as “time is of the essence” loans, and straightforward bridge loans. While its average loan size is in the $25 million to $30 million range, it’s also done both larger and smaller financings.

“Benmark Capital was proud to work alongside Meridian Capital to provide a pre-development loan in prime Midtown Atlanta,”Moser said. “The recent commercial construction boom in the immediate vicinity including Google’s expanded presence at 1105 West Peachtree will bring a lot of new jobs to the neighborhood requiring additional luxury residential units.”

“Despite what many would describe as a  challenging capital markets environment, Meridian was able to arrange accretive pre-development  financing with a trusted lender, Benmark Capital, for this well-located project in the heart of Atlanta,” Filler said.

Olympia Heights officials could not immediately be reached for comment.