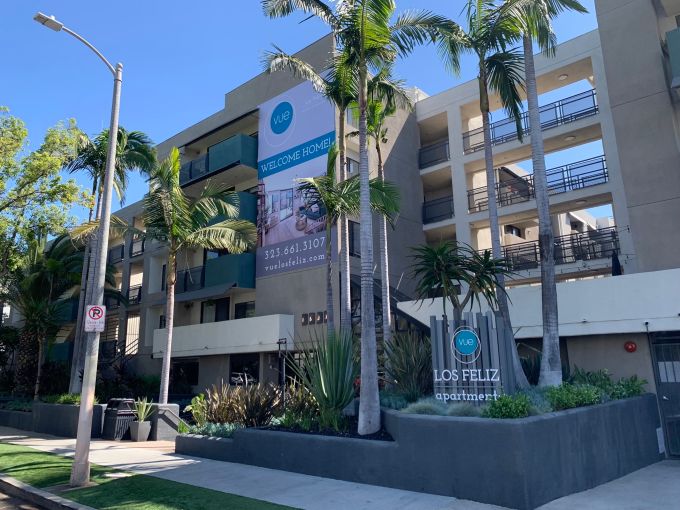 The Vue Los Feliz is at 1800 North New Hampshire Avenue in the neighborhood between Hollywood and Silver Lake. photo: Institutional Property Advisors

The historically high rate of inflation doesn’t seem to be damping demand for multifamily real estate in Southern California.

Arizona-based Alliance Residential paid $64.3 million for the Vue Los Feliz, a 134-unit apartment property in the Los Feliz neighborhood of Los Angeles. The deal closed June 24 and pencils out to $479,851 per unit.

“The Los Angeles metro area is experiencing historically strong multifamily metrics this year, including sub-2 percent vacancy,” IPA’s Kevin Green said. “Employment growth in Los Angeles County is projected to be 5.1 percent this year, which is twice the national rate.”

The Vue Los Feliz is at 1800 North New Hampshire Avenue in the neighborhood between Hollywood and Silver Lake. It’s near the 101 and 5 freeways, as well as two Metro subway stations. It’s also near Griffith Park, Barnsdall Art Park and the Los Feliz Theater as well as Los Angeles City College and The Los Angeles Film School.

“The acquisition presents our buyer with a great opportunity to increase the value of the property further by continuing and enhancing a renovation program implemented by previous ownership,” said IPA’s Joseph Grabiec, who brokered the sale with Harris on behalf of the entity tied to Pacific Union Investors.

The property includes studio, one- and two-bedroom apartments, and it features an indoor saltwater swimming pool, a spa and a rooftop entertainment deck with a barbecue and lounge area.

Alliance was not immediately available for comment. The company is active in 16 states with development and acquisitions of high-end, workforce and senior housing. Near the end of 2021, Alliance sold the 103-unit Broadstone Candara at Hancock Park on the border of Hollywood for $60.1 million.