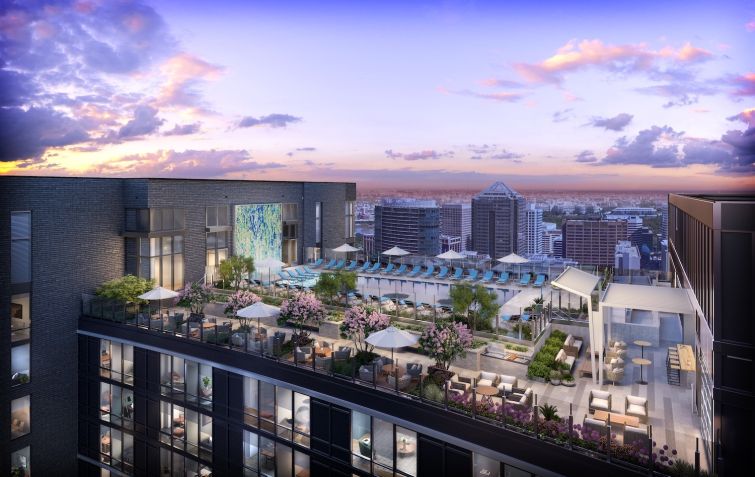 The rooftop of the Evo. Photo: Penzance

The Highlands is a 1.2 million-square-foot mixed-use development project along the Rosslyn-Ballston Corridor. It includes the revitalized Arlington County Fire Station No. 10 and the 26,000-square-foot Rosslyn Highlands Park.

Late last month, Cortland acquired Oakwood Arlington, which will be renamed Cortland Arlington, as part of a seven-state multifamily deal that added 1,700 units to its portfolio.

Both the Aubrey and Evo were developed and sold by a joint venture between Penzance and The Baupost Group, a Boston-based investment manager. Together, the two towers offer 786 units.

“Evo was the phase 2 acquisition of Cortland Rosslyn, which is part of our regional market entry strategy to acquire assets in desirable walkable, mixed-use locations in close proximity to employment nodes,” Dan Irvin, director of investments for Cortland, told Commercial Observer. “It has a best-in-class amenity set and stunning panoramic views of both D.C. and Virginia.”

The price of the acquisition was not disclosed but is believed to be approximately 25 percent of the company’s $1 billion commitment, according to someone close to the deal.

“The Highlands project is very special to our team at Penzance after working tirelessly on the project for 11 years, but we are proud to hand over the reins to Cortland to maintain the unique community that we have created here in Rosslyn,” John Kusturiss, chief development and construction officer of Penzance, said in a prepared statement.

Christine Espenshade of Newmark represented Penzance in the sale. Cortland was represented in-house.