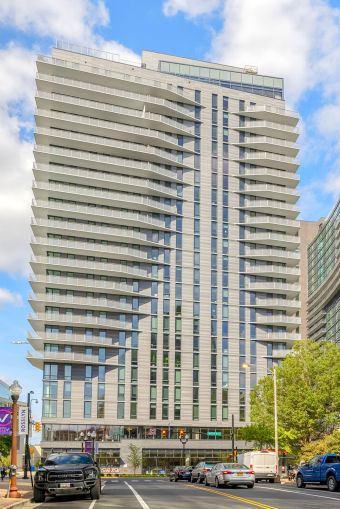 The company has two more Arlington acquisitions in the pipeline that are expected to close soon, which will bring the combined portfolio to more than 1,500 units.

“Northern Virginia is a highly coveted location that is already seeing a rebound in growth as residents move back to the urban core,” Mike Altman, Cortland’s chief investment officer, said in a prepared statement. “This is just the start of Cortland’s investment in the region, driven by our commitment to deliver an unrivaled resident-centric, hospitality-driven experience that is changing the standard of apartment living.”

Penzance was the seller of the 23-story Aubrey, which it developed in partnership with The Baupost Group. Aubrey is one of three luxury multifamily properties at The Highlands, a mixed-use project along Arlington County’s Rosslyn-Ballston Corridor.

“At Penzance, we invest in markets that provide near and long-term value creation opportunities providing us optionality in our exit timing,” John Kusturiss, chief development and construction officer of Penzance, told Commercial Observer. “Rosslyn is a robust submarket and we are big believers in the long term prospects for this region. When the opportunity presented itself to sell to Cortland, we knew they would be good stewards of the property and transacting with them allows us the opportunity to redeploy capital and focus efforts on new opportunities.”

The property is a LEED Gold Certified community and offers studios to three-bedroom units, penthouses, and two-level townhomes. Amenities include a rooftop sky lounge and pool.

Christine Espenshade and Robert Garrish of Newmark represented Penzance in the sale.

Cortland Pentagon City, located in National Landing, will have views of Amazon’s planned Helix Tower. Chevy Chase-based Polinger Company was the seller, having acquired it for $228 million in 2019.

“Our capabilities will allow us to modernize Cortland Pentagon City to go along with the grand vision that others have laid out for National Landing,” said Dan Irvin, Cortland’s director of investments. “We believe the technological sector growth of this area is important to the future of the region’s economy and offers diversity to Cortland’s Sun Belt portfolio. These are generational assets, and we intend to be stewards of the community.”

Cortland plans to double its investment in the area with the goal of becoming a top player in the market in the near future, the company said.