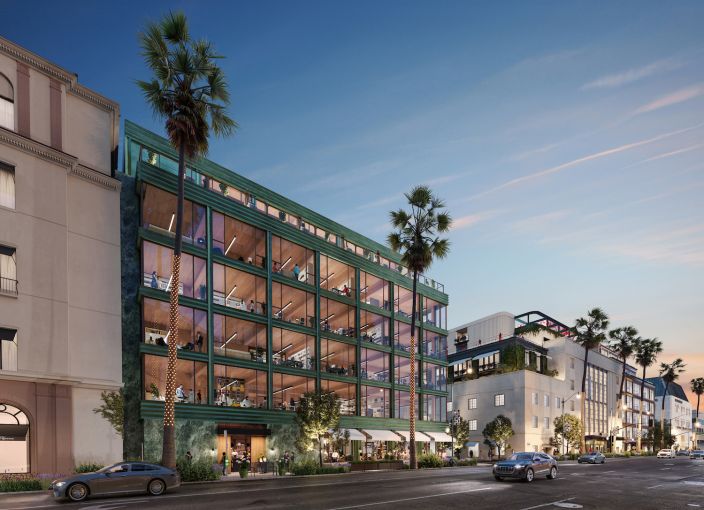 The five-year plan to restore its properties around Wilshire Boulevard near Rodeo Drive and add office and multifamily space, as well as new retail and restaurant space, a membership club and more. Marmol Radziner

The historic Saks Fifth Avenue department store in Beverly Hills, located in one of the top luxury retail districts in the world, is set for a major expansion and face-lift.

As part of an overall strategic shift, HBC, which owns Saks Fifth Avenue and Hudson’s Bay stores, announced a five-year plan to restore its properties around Wilshire Boulevard near Rodeo Drive and add office and multifamily space, as well as new retail and restaurant space, a membership club and more. HBC Properties and Investments, HBC’s real estate and investments arm, will seek approval from the city for a 3.4-acre project at 9600 Wilshire Boulevard.

The property currently contains the Saks Fifth Avenue Building that was first constructed in 1938, as well as a single-story addition completed in 1995 for the Saks’ shoe department. It also includes the vacant former Barneys building at the southwest corner of Wilshire Boulevard and South Camden Drive, and two surface parking lots.

Designed by Marmol Radziner, the new plan calls for the construction of two Class A office buildings totaling 140,000 square feet, one on the unused Wilshire Boulevard parcel and the other on the one-story shoe department parcel; 68 apartments on the surface parking lots, along with new retail and dining space and the membership club; the restoration of the 156,300-square-foot Saks building façade; and the adaptive reuse of the Barneys building as the new home of Saks Fifth Avenue Women’s store.

The Saks Men’s store will remain at its current location on the southwest corner of Wilshire Boulevard and Bedford Drive in the former I. Magnin building.

“The 9600 Wilshire project is an exciting and important step on our journey to build a future-facing holding company of luxury online and brick and mortar retail, high-end real estate and an intellectual property incubator that launches new businesses such as our growing, global flexible office offering,” Richard Baker, HBC governor, executive chairman and CEO, said in a statement.