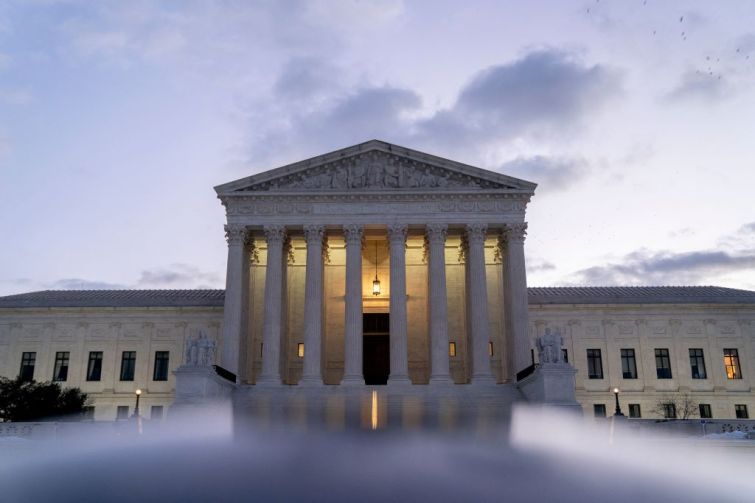 The US Supreme Court. Photo: STEFANI REYNOLDS/AFP via Getty Images

More than a month after a memo leaked from the U.S. Supreme Court warning of the intention by justices to overturn Roe v. Wade, the other shoe has fallen.

The highest court in the land overturned the law Friday morning, using Dobbs v. Jackson Women’s Health Organization as precedent to bring the constitutional right to an abortion, established in 1973, to an end in at least 22 states.

In May, Commercial Observer spoke to leaders and analysts in the real estate industry, many of whom said any overturning of Roe would greatly complicate companies’ decisions about where to locate offices and new developments.

And companies already put out new policies to help staff members in states set to lose abortion rights. JPMorgan Chase told its employees Friday that it would cover travel costs for their workers to head out of state to obtain the procedure, if needed, according to CNBC. Disney, Netflix, Paramount, Comcast, Sony and Meta all came to similar decisions, Variety reported.

​​“Our health care plans have historically covered travel benefits for certain covered services that would require travel,” JPMorgan Chase said in a statement. “Beginning in July, we will expand this benefit to include all covered services that can only be obtained far from your home, which would include legal abortion.”

One of those states where Americans may be looking to obtain abortions is New York.

“I want everyone to know that abortion remains safe, accessible and legal in New York,” Hochul said in a statement. “Just last month, in anticipation of this decision, I made an historic $35 million investment to support our state’s network of abortion providers.

“History shows us that when abortion is banned, abortion becomes unsafe for women,” Hochul added. “Low-income individuals and people of color will be harmed the most. … To anyone who is working to deny abortion access, our message is clear: not here, not now, not ever.”

NYC Health + Hospitals CEO Mitchell Katz expressed disappointment in the decision and said New York’s public health care system was gearing up to get ready for the potential influx of people seeking its abortion services.

“We will do whatever it takes to accommodate patients from near and far,” Katz said in a statement. “And we will take the necessary steps to protect the safety and security of our patients and the health care professionals who provide these services.”

The workforce could also suffer as a result of the Supreme Court’s decision, according to Jessica Lappin, president of the Alliance for Downtown New York, who believes it could be only the beginning of more rights being taken away.

“In 1970, right before Roe, just 50 percent of single women and 40 percent of married women were participating in the labor force. Today, that figure is close to 80 percent,” Lappin said in a statement. “It is absolutely clear in the court majority’s writing that the dismantling of Roe is the leading edge of an assault on an array of privacy rights that extends to contraception, gay rights and gay marriage — all of which will profoundly impact the ability of women and countless other Americans to be equal citizens and full economic and civic participants in our society.”

New York will not be the only state upholding reproductive rights, with the governors of California, Oregon, Massachusetts and Washington committed to protecting patients and providers in similar fashion. California Gov. Gavin Newsom introduced a package of bills to provide up to $125 million for access to services and help prepare for an impact to the health care system there from out-of-state patients.