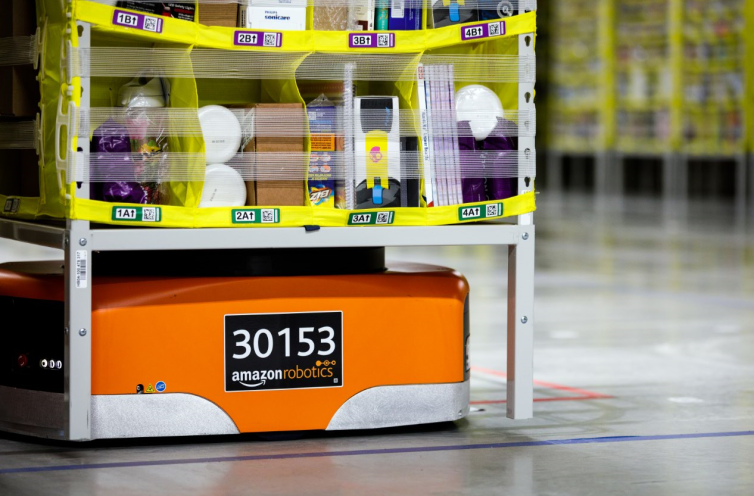 Retailers are ramping up investments in robotics and automated fulfillment centers as industrial rents rise at double-digit rates in major markets across the country. At the same time, the adoption of technology could stymie demand for warehouse space, which is at a historically low vacancy rate nationally of 3.3 percent, according to a recent report from Cushman & Wakefield.

Amazon, probably the nation’s most voracious consumer of warehouse space during the pandemic, announced last month that it will reduce its industrial portfolio by 10 million to 30 million square feet by subleasing space and terminating some leases as it faces several challenges that led to a loss of $3.84 billion, or $7.56 a share, for the first quarter. The return to profitability, however, may rely on a longer-term strategy and investment in robots to improve efficiency and save money across the e-commerce giant’s portfolio.

SEE ALSO: AECOM Sheds More Than Half of Its 108K-SF Midtown South Office

In April, Brian Olsavsky, Amazon’s chief financial officer, said on a quarterly earnings call that the company’s warehouses were overstaffed, costing about $2 billion over the past year. Just days earlier, the company touted the launch of a $1 billion innovation fund to invest in robotics and wearable technology.

The fund made five investments in its initial round that included companies focused on wearable safety technology for warehouse workers, inventory management software, and robots that can sort and pick goods. These technologies complement a rapidly growing segment of mega-warehouses that are increasingly reliant upon robotics to optimize operations.

From Syracuse to San Diego, Amazon has opened more than a dozen massive robotics warehouses where machines outnumber people 10 to 1. These massive structures follow a template developed by Amazon: five stories that encompass 3 million to 4 million square feet of floor space. Multistory warehouses are a relatively recent phenomenon in the United States as the logistics industry adapts to the needs of e-commerce retailers that demand goods delivered in shorter time frames. Some retailers now offer same-day delivery on items as they race to fulfill consumer requests.

Amazon started adding robots to warehouses in 2012. It has since deployed more than 350,000 mobile units across its logistics centers. In October, it opened a 350,000-square-foot facility with corporate offices, research and development labs, and manufacturing space in Westborough, Mass., to accelerate production and enhance robotics innovation.

In Ontario, Calif., the largest such Amazon warehouse is being built by Prologis. That warehouse used a novel approach to its planning and city approvals received last June. Although it spans 4.1 million square feet, the developer entitled the project for about one-third of that space and cited a building code that allowed portions of the building to be classified as robotics storage to account for the remaining 2.6 million square feet. The design allowed the developer to reduce the amount of parking spaces and other necessities such as bathrooms and stairwells that would be accessible to human workers. As such, the building was approved under existing zoning requirements on a much smaller parcel of land than would typically be needed for such a large structure, further reducing costs of construction.

The Ontario planning department noted that, if another tenant were to occupy the building and wanted humans to work within the entirety of the structure, it would need to go through the approval process again.

Costs were not disclosed, but similar structures have been estimated for $250 million to $350 million. One in Bondurant, Iowa, a 2.69 million-square-foot mega-warehouse, was acquired by Virginia-based Capital Square earlier this year for $326 million, or $121 per square foot, according to public documents. The land had been acquired by developer Grant Street Project, affiliated with Dallas-based Hillwood for $60.8 million in January 2020. Amazon has a 20-year lease on the building that runs through 2041, according to public documents.

For investors, the use of robotics within the fulfillment centers requires higher upfront costs to fit out the buildings, but also offers significant tax savings through depreciation while offering the security of a long-term lease.

There are added benefits associated with labor costs, too, depending on the area where facilities are located. Robots can help mitigate high labor and construction costs in dense, urban areas. However, when they are built in sparsely populated areas such as a 3.8 million-square-foot facility in Woodburn, Ore., about 30 miles south of Portland, where talent pools are limited, they supply goods to a much larger trade area with fewer workers than traditional fulfillment centers.

Amazon is expanding its domestic mega-warehouses rubric globally. In Rome, Italy, the warehouse dubbed FCO5 opened last month as that country’s first mega-warehouse facility and the largest fulfillment center in Europe. Overall, these warehouses are still a small portion of Amazon’s 370 million-square-foot U.S. portfolio but represent an outsized portion of its additional real estate holdings added over the past five years.

Other companies at the forefront of e-commerce automation include Walmart, which announced earlier this month it was opening four next-generation mega-warehouses with the first opening this summer in Joliet, Ill. The retail giant partnered with Knapp, a tech company for fulfillment solutions, to develop an automated storage system that condensed a 12-step manual process down to five steps. It touted the benefits of the technology as offering double the storage capacity and double the number of customer orders it can fulfill daily, according to a statement. That technology is key to the new facilities, but Walmart also expects to modernize its supply chain by adding automation to existing facilities.

Walmart’s network of 42 regional distribution centers is in the process of a major upgrade through a separate partnership with Symbiotic that was announced last year and expanded in May. Joe Metzger, executive vice president of U.S. supply chain operations, described the technological upgrade as revolutionary when applied at scale.

“The system transforms a process that was done manually using an algorithm to store products like puzzle pieces using high-speed mobile bots – operating with a precision that speeds the intake process and increases the accuracy of freight being stored for future orders,” Metzger wrote. “By using dense modular storage, it also expands building capacity. And by using high-speed palletizing robotics to organize and optimize freight, it creates custom store- and aisle-ready pallets, which take the guesswork out of unloading trucks.”