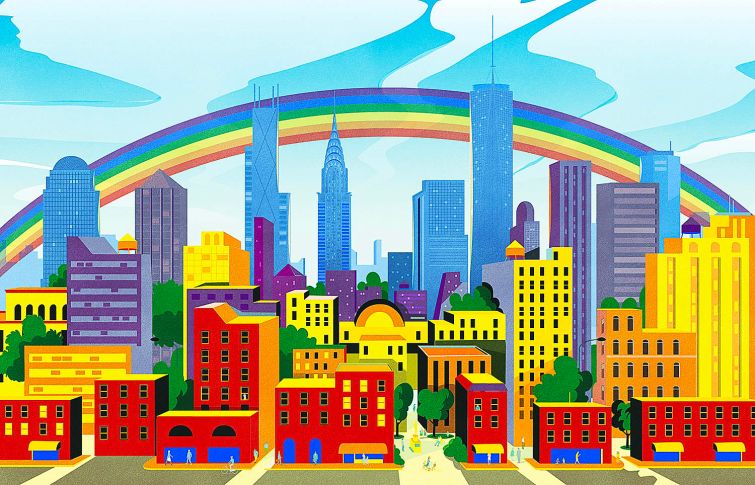 Sam Chandan launched the Real Estate Pride Council with the goal of enhancing networking opportunities for LGBTQ individuals in the commercial real estate profession, and he hopes the group can foster positive change for the industry.

The advocacy association includes lesbian, gay, bisexual and transgender professionals in the CRE industry, and it is quickly gaining momentum in the short time since its soft launch in February. It had 73 active members and just over 400 opting into its mailing list as of early summer. The group’s main goals are to advocate for more LGBTQ representation in the CRE profession and advance the careers of those already in it. It is the first known national organization with a mission to engage broadly in the CRE industry on building visibility, engaging in advocacy, supporting research, and developing mentorship programing.

“The Pride Council was really born out from this idea of creating visibility so that a young person thinking about going into real estate who might feel even in 2022 that there are limited career paths for someone who is open and authentic and to really disabuse that notion, and to ensure folks that you can be LGBTQ and can be out and successful in real estate,” said Chandan, head of New York University’s Stern Center for Real Estate and a frequently cited analyst in the field. “We’ve heard from a lot of different firms and industry associations who want to understand how they can support us and how they can support our mission and partner with us, which has just been fantastic.”

Chandan added that another chief goal of the Pride Council was to create a resource for LGBTQ CRE professionals at smaller firms, since larger companies often have their own internal affinity groups. He also wanted it to serve as a resource for major industry associations to source speakers for programming or raise issues that may be of importance to the LGBTQ community at large, such as providing adequate housing needs for LGBTQ senior citizens.

The council recently formed a partnership with Deutsche Bank, which has an LGBTQ affinity group called dbPride headed by Jon Tilli, its director of commercial real estate.

“Visibility for the LGBTQ community is best accomplished when we bring our whole selves to work — not only to help us connect with our clients, but to make it easier for the next generation of colleagues to see themselves succeeding in commercial real estate,” Tilli said. “I’m excited to see the impact the Pride Council will have and am grateful for the opportunity to help build an alliance of visible, out leaders in our industry.”

Rachel Hodgdon, president and CEO of the Internatonal WELL Building Institute, said a conversation with Chandan two years ago changed her outlook on the importance of being more public about her lesbian identity as an executive. Hodgdon, who is a Pride Council board member, hopes the association helps real estate grow into a more “LGBTQ-friendly industry” where people feel comfortable openly embracing their identities.

“I’ve been out for 20 years with my family and friends, but I wasn’t necessarily out on public platforms,” said Hodgdon, who has hired a number of LGBTQ and nonbinary employees in the last two years. “There are many gay and LGBTQ individuals in real estate, but who aren’t necessarily out with their real estate identities.”

Hodgdon noted that it is hard to get a firm grasp on how many LGBTQ individuals work in CRE since very few companies report statistics for this group as a metric for diversity. She is hoping Pride Council can help encourage more firms to maintain data on their LGBTQ workforce representation, which will be aided by having more “outward representation” in the industry.

The Pride Council’s rollout has been slow and deliberate, according to Chandan, in order to prevent overlap with work other industry trade associations already have underway. The council, which has been in the works since the early days of the COVID-19 pandemic, held a kickoff event at Deutsche Bank’s Manhattan headquarters  June 23 to coincide with Pride Month.

Chandan said the quarantining that occurred during the height of the pandemic amplified the need for the council.

“The isolation that we all felt made it even more challenging for many LGBTQ-identifying individuals and really motivated a core group of us that it was time we got this going,” Chandan said. “The pandemic just reinforced the importance of doing our part to help build those connections and that network for young professionals.”

While there will be a large New York City focus in the council’s work, Chandan said he wants to ultimately launch a national network. The association has board members lined up in Boston, Los Angeles and San Francisco so far in addition to those in the Big Apple.

One of the initial near-term goals for the Pride Council is the launch of a formal mentorship program in June that will pair established CRE veterans with graduate students and early career professionals. Chandan is also looking to establish a speakers bureau this year that can be a catalyst for the overall CRE industry. In 2023, the Pride Council plans to hold a national forum in New York City that brings together LGBTQ professionals and allies working across the country to network and explore issues of common interest.

Andrea Himmel, principal and chief investment officer of Himmel + Meringoff Properties, said she hopes Pride Council can educate young LGBTQ people about the many positives of working in real estate while also dispelling negative perceptions they may have about the industry. Himmel, who sits on the Real Estate Board of New York’s diversity committee, also stressed the importance of LGBTQ professionals within CRE banding together more to accelerate positive changes.

“It’s really important to find community and connect to our roots,” said Himmel, who is national chair of the Stonewall National Monument Visitor Center, the first LGBTQ visitor center in the National Park Service and part of the historic 1969 uprising site. “By connecting with one another, we are empowering ourselves as a community.”