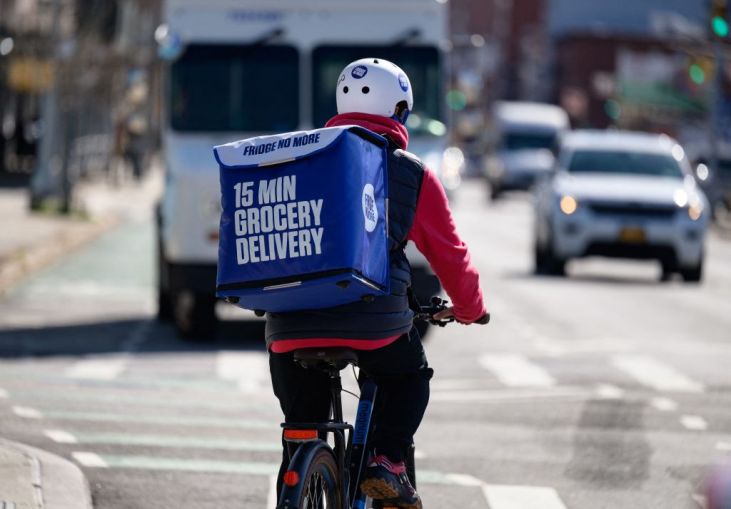 An employee rides a bike to deliver groceries on March 31, 2021 in Brooklyn. Photo: ANGELA WEISS/AFP via Getty Images

The 15-minute grocery delivery service JOKR will shutter its New York and Boston operations, the company announced in an email to customers Wednesday.

JOKR will cut about 50 staff positions, shutter or sell its nine fulfillment centers in New York and Boston, and is considering doing the same with the rest of its U.S. locations while it focuses instead on the Latin American market, Bloomberg reported.

The company, which was reportedly discussing selling its New York City business just seven months after it launched, joins a number of similar grocery delivery businesses that expanded aggressively during the pandemic but started to quietly fold after burning cash on leases for retail space and hiring full-time delivery workers.

“While we were able to build an amazing customer base … and lay the groundwork for a sustainable business in the U.S., the company has made the tough decision to exit the market during this period of global economic uncertainty,” JOKR said in its email to customers.

The company will retain some New York City staff and offer its wares at half price to clear its inventory before it cuts operations in the city and Boston on Sunday.

JOKR scored a $1.2 billion valuation in December and was expected to burn through $74 million in 2022 and $84 million in 2023, The Information reported. Even with its high cash burn, JOKR told Bloomberg that it has enough funding to operate for two years and should break even in about 18 months.

However, this wasn’t the first market JOKR pulled out of. In April, it shut down service in Europe after it failed to find a buyer, Insider reported. Instead, it will put most of its efforts in Latin America, where it loses less than $10 million a month and has outposts in Brazil, Mexico, Colombia, Chile and Peru, Bloomberg reported.

JOKR did not immediately respond to a request for comment.

The closure is no shock to the 15-minute grocery delivery industry, which has seen other businesses fold in rapid succession in recent months. Buyk shut down in March, and the next week Fridge No More abruptly stopped deliveries and sent its 600 employees home before closing its East Coast operations. Getir, a Turkish grocery delivery firm, and Berlin-based Gorillas both announced layoffs in May, two months after GoPuff said it would cut about 3 percent of its worldwide workforce.