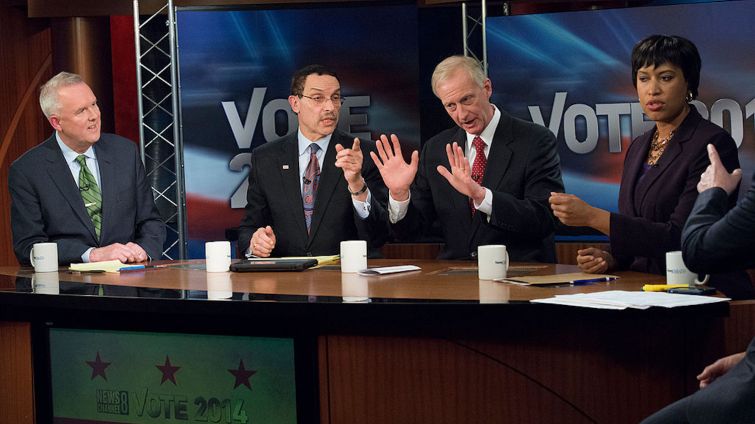 Mayor Muriel Bowser has been Mayor of Washington, D.C., since taking office in 2015, and was reelected four years ago in what was essentially an uncontested race.

But as Bowser goes for a third term, she’s facing steep competition from challengers in the Democratic primary to be held on Tuesday, with the winner going on to face Republican Stacia Hall and independent Rodney Grant in November.

The three other candidates include two D.C. Council members — at-large member Robert C. White Jr. (who is polling about even with Bowser) and Ward 8 representative Trayon White Sr. — as well as former advisory neighborhood commissioner James Butler. All have their fair share of support.

Mayor Bowser has made affordable housing one of her biggest priorities since taking office, and her 2023 budget included a historic $500 million contribution to the Housing Production Trust Fund and $41 million targeted for project-sponsor vouchers to make housing affordable to low-income residents.

Additionally, the budget included $110 million going toward rehabilitation or replacement of more than 1,500 units of public housing over the next three years, the majority for seniors; and $219 million to bring back public housing units at Barry Farm, Park Morton, Bruce Monroe and Northwest One.

During the most recent debate, Mayor Bowser pointed to her administration’s unprecedented $1 billion to build and preserve affordable housing, noting there is no equal in any other U.S. city, and promised to continue with her commitment to affordable housing.

But critics say she had eight years to improve affordability, but the opposite has happened. In addition, during her tenure, D.C.’s Department of Housing and Community Development was found by the Inspector General to have underspent on the lowest-income residents, and just this week the D.C. attorney general sued the D.C. Housing Authority for discriminating agianst residents with disabilities.

Robert White grew up in D.C. and is running with the promise that he will work to keep families from being priced out of their homes — as his family has been over the last 25 years.

“Through innovative solutions to our housing crisis, we will reverse the tide of displacement and ensure all people who want to make D.C. a home can,” White said during a recent debate. “With rents climbing and affordable housing far too limited, both D.C. natives and newcomers are struggling to find places to live. Families especially are having a hard time finding homes where they can grow.”

As part of the Council, White has been advocating for innovative solutions to respond to the housing crisis, pushing to transfer unused government properties to organizations that can develop affordable housing, and working with officials from both Maryland and Virginia to commit to build more workforce and low-rent housing units over the next decade.

Butler’s campaign notes the District has seen the highest level of displacement of Black and brown families in recent years, with many being forced to flee the city because they can no longer afford to live there. Furthermore, he claims too many people — millennials especially — are forced to have multiple roommates and struggle to find affordable housing.

One of Butler’s solutions is to bring better rent control to D.C., promising to update the current rent control laws to include all development, not just buildings constructed before 1976, and infuse income-based housing into the new law.

Butler’s campaign notes that he will not rely on HUD’s formula to calculate the area median income, calling those numbers inflated, and will find a better way to calculate AMI to help more people.

If elected, he also plans to reduce tax breaks to developers for horizontal development unless these developers provide guarantees that they will create affordable housing based on income standards for each particular ward of the city.

“Among other things, he will monitor and, when necessary, reduce building permits until vacant units are filled to serve residents in our communities, and will intermingle income-based housing with affordable housing, allowing residents to have an opportunity to live in different wards in the city,” his campaign noted.

Trayon White, a lifetime native of Ward 8, is also campaigning on the promise to create an environment where his neighbors aren’t displaced and able to raise families and benefit from new development.

As a Council member, he introduced the Eviction Prevention Act of 2017, requiring any housing provider to transmit a copy of any notice to vacate to the office of the tenant advocate within two days after the notice is served on the tenant. After receiving the eviction notice from the housing provider, the office of the tenant advocate must send the tenant a notice of basic housing rights and resources, a list of tenants’ rights organizations with their contact information, a list of organizations that provide rental payment assistance, and a list of organizations that provide legal advice for tenants facing eviction.

Trayon White noted during the debate how Bowser’s Housing Production Trust Fund was merely a “slush fund for developers” and argued that much of D.C.’s affordable housing wasn’t truly affordable to low-income Black residents.

Robert White agreed, stating “I’m going to stand up to developers. And if they want to be part of our community, they have to build the housing we need.”

Bowser disagreed with their assessments during the debate, noting the developers that the District is utilizing are a “necessary partner” in the new development of affordable housing.

“I have a record of building affordable housing and supporting quality development in all eight wards, and I’m the only one who can say that,” she said.