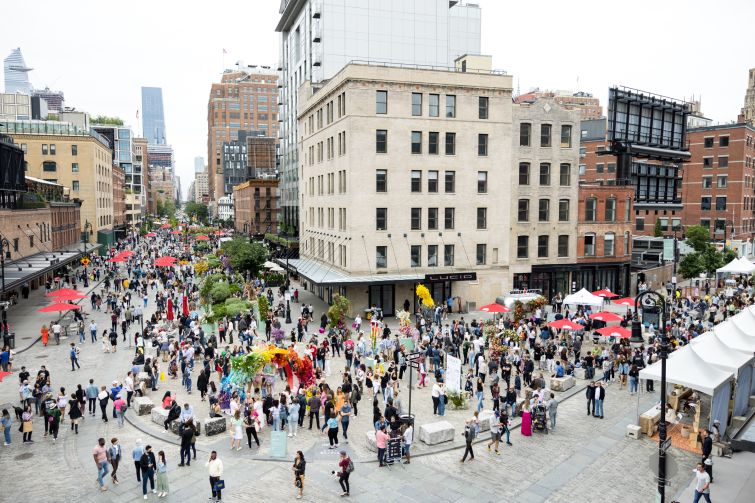 When COVID arrived, New York City’s business improvement districts (BIDs) were constantly out and about in their neighborhoods, helping area businesses survive and keeping their areas clean and beautiful so people would feel welcome returning to some semblance of normal life.

But since almost the beginning of the pandemic, BIDs have also worked to activate their city streets, bringing arts and culture to their neighborhoods to make them lively destinations worthy of New York City.

Today, with the city’s parks and streets teeming with people and restaurant reservations hard to get, BIDs have turned up their efforts to reinforce the attributes that make New York City special.

Examples of how BIDs have been beautifying the city and bringing culture to its residents are everywhere.

From August through October of last year, the Meatpacking Business Improvement District worked with the minority-owned nonprofit ARTNOIR on “From A Place, Of A Place,” a three-month program that celebrated Black culture through art and performance. The BID also hosted a two-day Future Streets Design Expo on West 13th Street in October, highlighting products for the future of New York City’s streets including outdoor dining modules, parklets, secure bike storage and more.

“We asked the community to think about what could be different if they had the opportunity to plan a street,” said Jeffrey LeFrancois, the BID’s executive director. “We laid out 4,000 square feet of sod. We brought in planters, programs and music. We did it in 2020 and 2021. We’re going to be doing it again this year and potentially tying it to a sustainability conference, working with partners in the neighborhood to have a conversation about what sustainability looks like in the city.”

On a similar theme, the BID is hosting the second annual LEAF Festival of Flowers, a series of vibrant and color-packed floral installations from June 10 through June 12.

“This festival activates the entire neighborhood,” said LeFrancois. “There will be a large flower market on Washington Street, and huge floral installations all along Ninth Avenue. We’ll shut down the district entirely to vehicles, so it will be a pedestrian paradise in bloom.”

The Grand Central Partnership has also been active in its area, planning everything from music to greenery.

“We have spent time enhancing public spaces like Pershing Square Plaza and East 43rd Street through plantings and seating areas,” said Fred Cerullo, president and CEO of the Partnership. “We are also having our Summer Solstice Music Festival all along Park Avenue from 39th Street to 54th Street on June 21, with musical performances between 4:30 and 6, and we’re having weekly concerts during lunchtime on Tuesdays and happy hour on Thursdays so people can enjoy the public space.”

The Partnership is also beautifying the area through sculpture — and hippos. The Cavalier Gallery, in accordance with the Partnership, recently unveiled a sculpture titled “Hippo Ballerina” at Pershing Square Plaza West, on the west side of Park Avenue between East 41st and East 42nd Streets. Created by Danish artist Bjørn Okholm Skaarup, the 2.5-ton bronze sculpture, accompanied by two related sculptures that will all remain on display through year’s end, is exactly what it sounds like. This marks the second collaboration between the Partnership and the Cavalier Gallery, following three Jim Rennert sculptures that were installed in Pershing Square Plaza in 2021.

Downtown, meanwhile, the Alliance for Downtown New York is celebrating a public art installation called moonGARDEN that began May 11 and runs for a few more days through June 8. The installation, created by LucionMedia, features illuminated, oversized, multicolored orbs that house silhouettes of public park life in front of 85 Broad Street.

“It consists of large spheres that range from 6 to 12 feet inside. They’re illuminated — there’s an immersive aspect with shadows — and they create a brightly lit path,” said Jessica Lappin, president of the Alliance. “It’s been in Beijing and Houston before we brought it to New York. It’s beautiful.”

The Alliance is also currently hosting, in association with nonprofit theater group En Garde Arts, “Downtown Stories: Dreams from New York’s Oldest Streets,” a monthlong series of performances based on interviews with residents and business owners in Lower Manhattan. Performances run through June 25.

Over the past two challenging years, BIDs have been one of the city’s most reliable resources, doing all they can to keep New York thriving.

“Our priority of late has been continuing to position the Meatpacking District as the place to be, whether you are a New Yorker or a visitor,” said LeFrancois. “We see the District as a great place to work, and we are really leaning into how we can support a return to office in that way. A lot of offices are talking about what amenities they can provide employees, but we see ourselves as being able to amenitize the neighborhood with our plazas, our public space, our programming, and open streets.”

“As we’ve seen more people on the streets — workers and tourists alike — our priority has been to make them feel welcome, to make sure the neighborhood’s looking great and feels like a good place to be,” said Lappin.

Arts and culture are just one tactic being used by BIDs to revitalize the city’s streets. If there’s one thing that holds a strong attraction for New Yorkers and visitors, it’s any event or promotion highlighting the city’s culinary offerings.

The Downtown Alliance is bringing back its Dine Around Downtown event on June 7, from 11 a.m. to 3 p.m. at Fosun Plaza, between Liberty and Pine streets and Nassau and William streets. Hosted by Rocco DiSpirito, the event will allow attendees to sample fares from over 35 local eateries.

And since the Grand Central Partnership had to cancel its own food event the past two years, it took a creative approach to showcasing its restaurants.

“We’ve been working very closely with food and beverage businesses, which were particularly hurt over the past two years,” said Cerullo. “For over 20 years, we did a food tasting event called Grand Gourmet — The Flavor of Midtown. But as an in-person event, we couldn’t do it. So last year, we came up with a virtual interactive sweepstakes to support our restaurants, lounges and bars, where people won gift cards to our food establishments and bars. We’ll be doing that again throughout the summer, and we look forward to the return of our in-person Grand Gourmet event in 2023.”

While it’s hard to pinpoint how much of a neighborhood’s revitalization is due to these efforts, there is no question that compared to the desert of two years ago, New York’s neighborhoods are alive and well.

“We’re clearly not back to where we were pre-COVID, but we’re in a markedly different place than we were six months ago,” said Lappin. “You see it and feel it in the subways and on the streets. Our pedestrian counts are up significantly. And in terms of evening activity, it’s hard to get a dinner reservation, so people are going out to eat and enjoying our local restaurants.”

Those pedestrian counts are showing results that bode well for the city’s return. Average daily foot traffic measured at the New York Stock Exchange shows an increase of 244 percent from September 2020 to April 2022.

The Grand Central Partnership also shows good news in this area, with pedestrian counts rising 12.1 percent from March 2022 to one month later, and counts from January 2021 to December of that year tripling or quadrupling throughout the area.

In the Meatpacking District, local pedestrian counts show that every single weekend in April had a higher total than any week in 2021.

Hotels are showing positive news as well in terms of rejuvenated business.

“Our hotels are doing much better than expected,” said Lappin. “I find this interesting because business travel, which was typically our bread and butter, clearly hasn’t returned. But our hotels are performing at or above citywide averages.”

The numbers for business openings are also up across the board. In the Meatpacking District, 10 percent of area businesses opened during the pandemic. Downtown, nearly 100 new businesses opened in 2021 — including the Alamo Drafthouse, the fine-dining restaurant Saga, and high-end gyms Life Time Studio Battery Park and Hydra Studios — coming close to the 2019 total of 105 openings. For Grand Central, December 2021 found that around 87 percent of occupied retail spaces housed operating businesses, an increase of 43 percent from June 2020.

While much of the news is good for New York’s neighborhoods and their BIDs, there is an understanding that the return to normalcy will not be exact. Rather than bringing the city “back” to normal, New York’s BIDs have been undertaking a larger, more challenging task: helping define the city’s new normal.

“I’m not a person who says we’re going to go back to the way it was,” said LeFrancois. “I actually think that’s not healthy. Our new normal is what we’re establishing right now, and I think that’s a good thing. It’s a struggle and a challenge. We are a city, and cities need to change. Stagnation is not good for the city. What we’ve really leaned into, our theme for this year, is ‘pursue your passions.’ New York thrives in Meatpacking, creativity thrives in Meatpacking, tech thrives in Meatpacking. In 2022, New York is alive and thriving. And that’s what we’re pushing forward in terms of what we want people to experience in the neighborhood.”