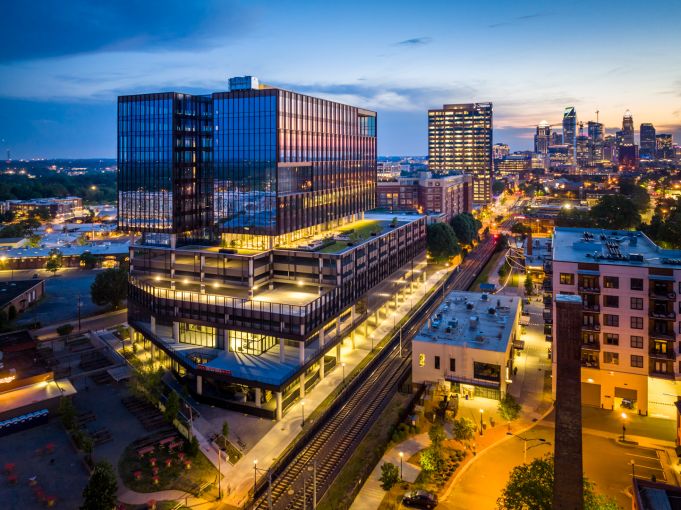 The Line was acquired by CBRE Investment Management for $206 million. dnusbaum

For CBRE Investment Management, the South End neighborhood of Charlotte, N.C., has a little bit of everything.

The institutional investor, an arm of global commercial real estate giant CBRE, acquired The Line office building for $206 million earlier this month from co-developers Portman Holdings and National Real Estate Advisors. The acquisition is part of a multifaceted investment approach to the neighborhood. Through other funds, CBRE Investment Management also owns a 350-unit apartment building, 25,000 square feet of retail space, and an 85,000-square-foot, single-story office building nearby. The Line deal closed as an all-cash transaction, and the new owner is in the process of arranging a loan on the property.

“It’s a choppy capital markets environment right now where all sectors are being impacted,” said Mike McDonald, Cushman & Wakefield vice chairman of capital markets, who represented the sellers along with partner Jonathan Napper. “Deals are being subject to retrades and price adjustments in all asset classes.”

This transaction, however, was very competitive and closed at the same price at which it went under contract. It’s indicative of the demand for new buildings in desirable neighborhoods such as Charlotte’s South End, which McDonald compared favorably to similar tech-driven office submarkets throughout the Sun Belt such as East Austin and The Gulch neighborhood in Nashville. These types of creative office projects are attractive, even when buildings are not stabilized from a leasing perspective. The Line was 45 percent occupied at the time of acquisition.

In fact, McDonald said that the buyer pool is deeper for buildings that are less than 80 percent leased in Sun Belt submarkets with strong demographics and projected employment growth.

“A value-add rent roll is the magic elixir,” McDonald said. “We sit with a lot of clients and tell them that you don’t have to get to 95 percent leased. There is greater depth in the buyer pool for a less than stabilized asset like The Line, and debt capital likes these types of office buildings, too. I don’t see that changing in the near future.”

Atlanta-based Portman Holdings acquired the site in 2018 for $12.7 million and started construction in late 2019 on the 16-story tower. The Gensler-designed edifice has 298,600 square feet of Class A office space and 24,400 square feet of ground-floor retail along with seven floors of above-ground parking. The upper nine floors contain office space featuring 34,500-square-foot floor plates with architectural elements, such as exposed concrete, evoking the area’s industrial history.

Tenants can utilize shared working spaces, a sky lobby, an exclusive amenity terrace, multiple outdoor decks, a bike room, lockers and showers. Plans call for a 364-unit luxury apartment tower with ground-floor retail on an adjacent parcel that will be connected to the office building and could deliver by early 2024. That site was not part of this transaction.

Although more offices are planned in the neighborhood and the long-term impact of remote work weighs on the overall office sector, net migration to Charlotte has been positive since the onset of the pandemic. The area has a well-educated workforce that attracts financial and tech companies.

Charlotte has had some of the highest employment and population growth over the past two years, according to commercial real estate data and analytics provider Markerr. The city ranks in the top five nationally for employment growth since March 2020, as of the first quarter. Median income growth is among the top 10 of the 25 largest metro areas tracked by Markerr, at 4.2 percent gains year over year as of the first quarter, 20 percent higher than the national average.

The South End neighborhood was primed for growth long before the pandemic, but the area’s evolution has been uneven. Several light rail stops were added on the LYNX Blue Line in 2007 and 2008. Multifamily residential development followed, but growth stalled during the Great Recession, which severely impacted the city’s dominant financial industry.

Tech workers started to gravitate to South End during that time. The city’s first coworking space opened there in 2009, and a weekly food truck night became a neighborhood institution. Developers subsequently added thousands of new apartment units, and office space has more than doubled over the past decade to 4.5 million square feet in an area that wasn’t considered a traditional office submarket.

Major corporations such as Lowe’s, Allstate, EY and LendingTree located tech operations in the area. Restaurants and shops followed, some of which have become known outside the city. The neighborhood’s “Confetti Hearts Wall” mural was recognized as the most Instagram-tagged location in Charlotte. The Line’s retail lineup includes craft brewer Sycamore Brewing, which relocated to the building when it opened and is Charlotte’s No. 3 Uber destination.

“When a neighborhood is an asset’s biggest amenity, we believe that every dollar invested in the cluster – whether it be in retail, well-amenitized apartments or quality office space – will indirectly increase the value of all assets in that cluster,” Sondra Wenger, head of Americas, commercial operator division, for CBRE Investment Management, said in a statement.