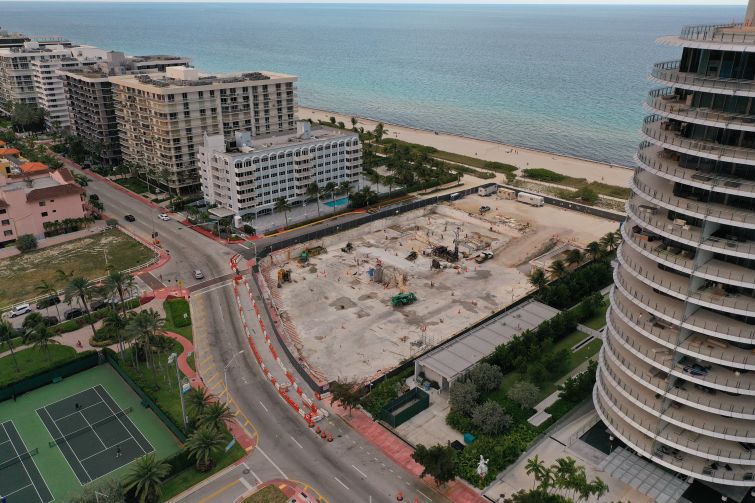 And yet, a year later, it’s clear that the tragedy has proven to be a boon for Miami’s real estate industry.

The collapse of the Champlain Towers South condominium in Surfside, Fla., an oceanfront town just north of Miami Beach, forced a reckoning over local building codes, safety measures and an encroaching sea.

Insurers and developers agreed to pay out over $1 billion in a settlement for injured survivors and victims’ family members. Heavyweights such as Miami’s largest condo developer, the Related Group, commissioned structural studies of buildings under its portfolio and now has its development plans peer reviewed.

Some feared that the horrific crash would scare off prospective buyers, cooling Miami’s sizzling residential market. But the impact has been the opposite. The collapse opened up opportunities for developers, as new condo buyers avoided aging buildings, and old condo owners were more willing to sell, freeing up lucrative waterfront land.

In fact, droves of condo shoppers swore off older buildings like Champlain — which was approaching its 40th anniversary at the time of the collapse — in favor of new construction, fueling Miami’s already red-hot condo market. Condo owners in aging buildings became receptive to selling not only because their apartments could fetch top dollar, but also due to their concerns over future expensive repairs.

For developers, the shift away from aging buildings spurred something of a gold rush, since it liberated valuable waterfront land. Developers are now buying out decades-old condominiums, most often those along the water, with plans to tear them down and develop luxury properties.

Even before the collapse, developers were snapping up condo buildings. Successful conquests included OKO Group’s 2017 acquisition of a 48-unit Brickell building, now the construction site of the Una Residences development, and Mast Capital’s purchase of the 124-unit La Costa building in Miami Beach just a month before the accident.

For all the interest, sales of entire condominiums require a significant amount of time and effort. While the threshold for buyouts varies from building to building, the majority of unit owners in most (if not all) Florida condos must agree to sell. Getting tens or even hundreds of owners to acquiesce is a tough task. Most often, the key for developers is to buy enough units to obtain a controlling vote on the condo board.

Once they have a controlling vote, developers can shutter the building’s board, a procedure commonly known as a condo termination. The move grants developers complete control over the property, paving the way for redevelopment.

For many owners of decaying condos, the collapse changed the equation, accelerating the termination trend. “It highlighted the issue with older condos,” said Joe Hernandez, a lawyer who specializes in Florida condominium law. “If it was a small fire before Champlain, Champlain poured a gigantic amount of gasoline.”

The total volume of land and tear-down deals in South Florida, which include condo terminations, almost doubled between 2020 and 2021, from $494.8 million to $824.1 million, according to a report by brokerage Bespoke.

Owners of aging condos witnessed firsthand the dire consequences of failing to maintain their properties. Residents of the Champlain building had delayed repairs for years. By the time of Champlain’s collapse, the cost of repairs had ballooned to $15 million, averaging $110,000 per apartment. Some residents had even sued the condo board over mismanagement and water damage in their apartments.

After the tragedy, condo owners throughout Florida left with decades-old apartments often  faced a stark choice: Pay for costly repairs or sell.

Many acquiesced. A number of developers, including Vlad Doronin’s OKO Group and One Thousand Museum developer Louis Birdman, had tried to buy the 88-unit Carlton Terrace building in Bal Harbour, a town just north of Surfside, but found no success in the years preceding the collapse.

The calculus changed just two months after the tragedy. The Related Group and two partners, Two Roads Development and Rockpoint Group, began the process of buying the oceanfront property, paying about $130 million for all units. The developers have now tapped the firm Skidmore, Owings & Merrill to design a luxury condominium that will replace Carlton Terrace.

Down the road in Miami Beach, owners of the 570-unit Castle Beach Club condominium received so many unsolicited offers from developers that in December 2021 they hired their own brokers to field bids and shore up the highest price. Five months later, the condo board selected Related Group and 13th Floor Investments’ $500 million offer.

The Champlain site itself underwent a termination. Dubai-based developer Damac Properties bought the 1.88-acre site of the ill-fated building for $120 million with plans to construct a Roberto Cavali-branded luxury condominium.

Developers’ aggressive offers reflect the insatiable demand for Miami apartments. Despite the deadly crash, Miami’s residential market continued to skyrocket in the year that followed. The median price of a Miami condo and townhouse jumped by 20 percent to $390,000, according to data from the Miami Realtors Association. Even during the search and rescue effort to recover those trapped under Champlain rubble in June 2021, an apartment at the Arte condominium, just two blocks from the tragedy, sold for $12 million.

Recent legislation from Tallahassee looks set to accelerate the termination trend. Just last month, Florida lawmakers passed a bill requiring the HOAs of condos over three stories tall to complete inspections and calculate the cost of renovations for each unit owner by 2024. Boards are now also barred from waiving cash-reserve requirements for structural work, a popular move that had previously left boards unable to pay for expensive repairs.

Stringent new requirements imposed on aging condos represent another liability for owners, further devaluing their properties in the eyes of the common home buyer, experts say. Even before the legislation, condos were typically expensive to maintain, requiring monthly HOA fees that are rising steeply to cope with rising insurance costs. “If you throw in work that has to be done because the building is beat up, it’s a death knell,” said Peter Zalewski, a South Florida-based condo analyst. Burgeoning interest rates and fears of a recession will only deflate prices, he predicts.

For developers, though, this pressure represents good news. A drop in prices makes it cheaper to buy out units and obtain land.

Still, terminations remain herculean achievements even in this post-Champlain era. Bulk sales can take years to close. And despite developers offering premiums, not all unit owners want to give up apartments they’ve owned for decades. It’s common for a handful of unit owners to refuse to sell. Those disagreements, like in the buyouts of the La Costa condominiums, will often result in lawsuits.

Other times, when faced with resistance from apartment owners, some developers have quickly given up. Just days after Trinity Development Partners, a little-known Boca Raton-based company, sent proposals to unit owners to buy the Waterview at Aventura condominium, the firm rescinded the offers after many residents pushed back, one apartment owner told Commercial Observer.

In addition to the wrangling with residents, developers are paying top dollar for apartments in Miami’s heated market. That’s all on top of normal construction and financing costs. If the luxury condo market were to shift, or even pause during a cyclical downturn, it could make the math to profitability difficult to add up.

In spite of risks and roadblocks, some developers, commonly industry heavyweights, still move forward with buyouts because they’re getting access to a rarified commodity: water. South Florida’s coast is notoriously crowded and most terminations occur in waterfront condominiums, those fronting the Intercoastal Waterway or the Atlantic Ocean. “There’s only so much beach and there are really no development opportunities left,” Related Group senior vice president Nick Pérez told Commercial Observer late last year. “You have to find old and replace with new.”

Despite the risks of seaside living, water views remain popular, especially among wealthy buyers. Between 2020 and 2021, the total transaction volume of waterfront properties worth over $10 million more than doubled, according to Bespoke. For the condominium that will replace Castle Beach Club, Related Group Chairman and CEO Jorge Pérez envisions an ultra-luxury building, the type of property that’s known to yield the highest profit margins.

While Miami’s market is expected to cool in the coming months, hope is not lost for developers. In light of the tragedy and new legislation, some brokers have counseled their clients to shun aging condos in favor of new properties. They include Nest Seekers’ Erin Sykes, who steers her clients toward buildings constructed after 1992’s hurricane Andrew, when strict building codes were enacted.

In fact, Sykes believes the best deals are the newest ones, particularly “pre-construction” apartments that are purchased before a building is complete — like the thousands of units now under construction along Miami’s shores. Pre-construction units boast the latest technology and safety features, but are sold at a discount to move-in-ready condos.

Buying pre-construction apartments is “almost like the adult marshmallow test where you can get your satisfaction two years from now,” Sykes said, referring to the famous experiment that tested children’s ability to delay gratification when presented with the chewy confection. “Those [condos] are still good investments.”

That’s welcome news to developers, who are fast at working setting up cranes across Miami’s skyline.