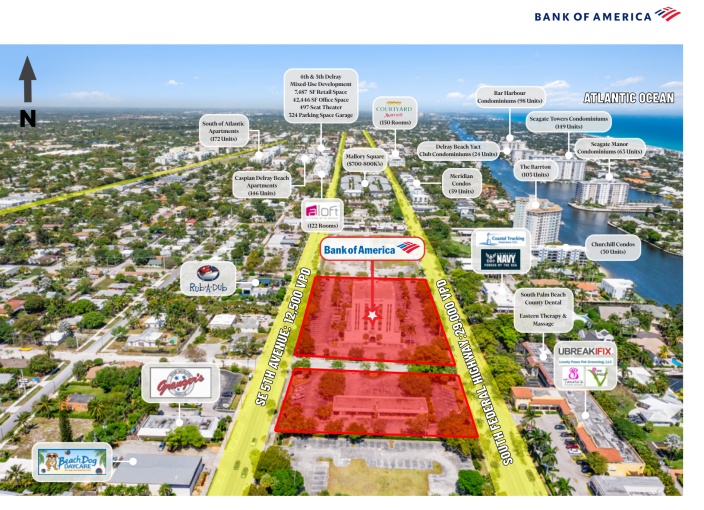 The 4-acre site contains a 54,765-square-foot office property and a 440-square-foot retail property, both built in the 1970s and leased to Bank of America. They’re at 551 SE 8th Street and 551 SE 5th Avenue, about a mile south of the town’s main retail corridor, Atlantic Avenue.

The Dallas-based seller, Spirit Realty, purchased the property in 2008 for $15 million, according to property records.

DeSantis acquired the buildings through his family office CDS International Holdings, which also owns a property just south of the Bank of America buildings, once leased to Fifth Avenue Grill Prime Steakhouse.

The investor first made his fortune founding Sundown Vitamins, later renamed Rexall Sundown, in 1976. The company went public in 1993, and seven years later was acquired by Dutch food producer Numico for $1.8 billion, according to Forbes.

Shortly after, DeSantis launched his family office in Boca Raton, and invested in a little known energy drink producer, Celsius Holdings. Despite some early tribulations, such as being delisted from the Nasdaq in 2011, Celsius now has a market capitalization of $5 billion and is a household name, sold at Target and Costco.

DeSantis’ 31 percent stake in the energy drink maker earned him a spot on Forbes’ billionaires list last year. His net worth is estimated at $1.4 billion.