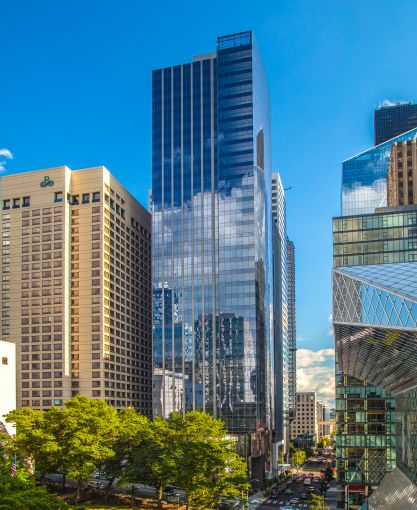 For Boston Properties, the cost of expansion in the Seattle market was much higher than the initial buy-in.

The company, one of the largest office landlords in the United States, completed its second acquisition in Seattle last month when it acquired Madison Centre for $730 million, or $960 per square foot, from a joint venture of Barings and Schnitzer West. Newmark’s co-head of U.S. capital markets, Kevin Shannon, brokered the sale, which he called the largest multi-tenant office sale in the nation year to date.

“The property was stabilized, and there were a lot of people that inquired off-market,” said Shannon. “The depth of investment capital that chased this asset reflects the conviction capital has in the fundamentals of the Seattle office market. Office-using job growth is exceptional in this market, and its tech and life science drivers are attractive.”

Boston Properties entered the market last July when it spent $465 million, or $567 per square foot, to acquire Safeco Plaza, a 50-story, 800,000 square-foot tower a block away from Madison Centre.

“After exploring the Seattle market for quite some time, we were thrilled to acquire Safeco Plaza last year as our initial flag in the market,” Kelley Lovshin, Boston Properties’ vice president of the Seattle region said in an email. “The diversity of companies that are headquartered here, the positive population growth, and easy access to talent make Seattle a dynamic and desirable location.”

The company acted like an all-cash buyer. It funded the Madison Centre acquisition with a one-year, $730 million term loan, but anticipates ultimately funding the acquisition through incremental asset sales structured as like-kind exchanges or joint venture equity, according to its first-quarter earnings report. Overall, the company projects selling $700 million to $900 million in assets during 2022.

“Debt buyers are being impacted by interest rates,” Newmark’s Shannon said. “All-cash buyers are taking advantage to capture an outsized share of deals right now. They gravitate towards trophy markets and assets.”

The 37-story Madison Centre was completed in 2017 and certified LEED Platinum by the U.S. Green Building Council. It was Fitwel Viral Response-certified in 2021. At $960 per square foot, Shannon estimates the value at slightly below replacement cost as construction costs on a similar building would currently be about $1,000 per square foot. Additionally, the building was grandfathered in on some building codes that provide additional savings compared to new developments.

Despite the Pacific Northwest’s penchant for rain, amenities include a rooftop deck with panoramic views. Tenants may also utilize communal and private meeting spaces such as a great room with a three-story fireplace and a living wall, a conference/training center, a boardroom, and a library. Washington Athletic Club operates a 5,700-square-foot fitness center in the building, and Amazon Go runs a cashier-less market on the ground floor. The area is desirable due to excellent access to highways and public transit, and is adjacent to the future extensions of the East Link Light Rail.

In addition to being major corporate headquarters for Microsoft, Amazon and Nintendo, Seattle has attracted more than 100 out-of-town technology companies that have expanded into the city over the past decade, according to industry tracker Geekwire.

Tenants include technology and professional service companies such as entertainment firm Hulu, accounting firm E&Y and headquarters for law firm Davis Wright Tremaine. At the time of acquisition, it was 93 percent leased to 20 companies with a weighted average lease term of seven years.

Madison Centre was completed nearly a decade after the site was acquired by developer Schnitzer West. The original office plans stalled in 2008 due to the great recession, but construction moved forward in 2014. The intersection where the building is located was completely transformed over the past several years.

The nearby F5 Tower at 801 Fifth Avenue leased the entirety of its 516,000-square-foot office portion to F5 Networks in 2018 at a starting rate of $40 per square foot annually, which will increase to $56.52 per foot by the end of its 14.5-year lease, according to Securities & Exchange Commission filings. South Korean hotel brand Lotte operates a 189-room hotel in that building’s lower floors.

Although the Seattle market suffered pandemic-related job losses, it bounced back quicker than other coastal markets heavily dominated by tech companies such as San Francisco. Asking rates were $51 per foot as of the first quarter in the Seattle CBD submarket where Madison Centre is located, according to Newmark’s office market report. That’s down by 1.1 percent from the first quarter of 2021, but up about 10 percent from five years ago. Tech employers added 16,000 jobs over the past two years in the greater Seattle area, and the region’s unemployment rate dropped below 4 percent in February 2022 after spiking to 16.6 percent in April 2020.

With the addition of this building, Boston Properties’ portfolio totals about 54 million square feet across 200 properties in Boston, Los Angeles, New York, San Francisco, Seattle and Washington, D.C. Eleven of those properties are under construction or being redeveloped.