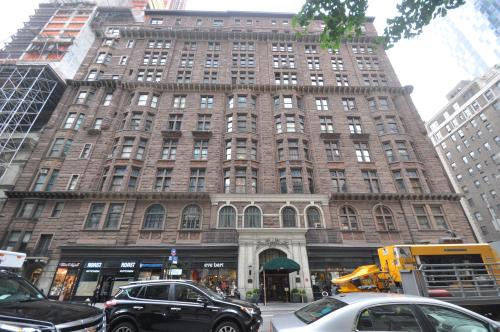 A Billionaires’ Row landlord is fed up with outdoor dining sheds along 57th Street in Manhattan and is suing the tenant association to put an end to it.

The Osborne Tenants Corporation, owner of the residential The Osborne at 205 West 57th Street, sued 57th and 7th Associates, which has subleased the building’s retail space for the past 50 years to various eateries, to get the sheds removed. The tenants corporation calls the sheds, their signs and the “drunk” patrons that fill them a “three-ring circus” in a lawsuit filed in New York State Supreme Court earlier this month, The Real Deal first reported.

Steven Sladkus, an attorney with Schwartz Sladkus Reich Greenberg Atlas representing the Osborne Tenants Association, described the usual scene outside the historic Osborne as unbecoming of the district, regardless of the COVID-era necessity that the city’s Open Restaurants program provided to businesses during the height of the health crisis.

The subtenants — which include Carnegie Diner, P.J. Carney’s and Pizza and Shakes — participate in the city’s Open Restaurants program. The suit claims their participation violates the leases between the landlord, tenant and subtenants.

“The board was extraordinarily sensitive about COVID — mindful about New York City restaurants and businesses staying alive,” Sladkus told Judge Andrew Borrok during a June 10 virtual hearing. “But, you know, your honor, it has literally turned The Osborne, which is, again, a landmarked building, into a three-ring circus. … There are tables everywhere. Food and people are outside later than 1 a.m. There are reports of crowds, people sleeping outside, maybe after getting inebriated at the bar.”

Osborne Tenants gave a 30-day notice of default that threatened to terminate 57th and 7th Associates’ lease if the restaurants did not remove their outdoor setups by June 10.

Heath Kushnick of Greenberg Taurig, who is representing the 57th and 7th Associates, sued earlier this month to obtain a temporary restraining order against the notice of default. Much of the signage was removed, as well as some seating on 57th Street, according to Kushnick, who said an extension of the cure period would help the tenants shore up matters further with their subtenants. Carnegie Diner and P.J. Carney’s remain the only subtenants with outdoor seating.

“[The defendant], even though it has no justifiable reason for doing so, is demanding that everyone remove their outdoor seating,” Kushnick said in court. “They already removed it from 57th Street … and now the defendant wants it removed from Seventh Avenue.”

Those two restaurants were told to stow the outdoor setups or face termination of their lease, and the majority have done so, according to Kushnick.

Since the city made Open Restaurants permanent in February, however, critics claim many sidewalk sheds have sheltered rats and often accumulated tickets. And nearly six months later, restaurants are being forced to take sheds down due to lack of guidance from city agencies, according to a report from The CITY. In a recent hearing about the program, Brooklyn Councilmember Justin Brannan described the sheds in his district as looking like “abandoned shipwrecks.”

The law firms and the restaurants involved did not immediately respond to requests for comment. The Osborne Tenants Corporation and 57th and 7th Associates could not be reached for comment.