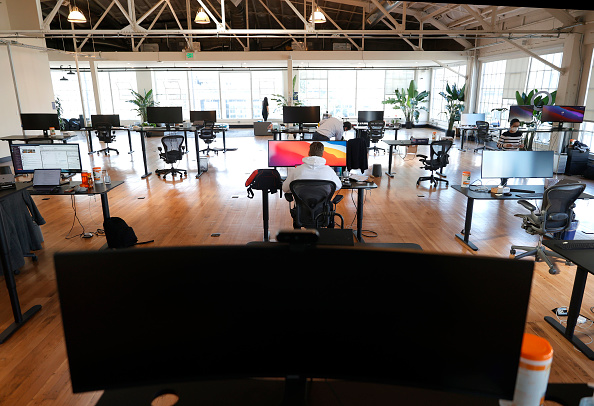 Clicks have very literally translated into commercial real estate dollars and deals during the pandemic, with online shopping’s meteoric rise translating into a sea of warehouse leases and sales across the country.

But it’s also enlarged the already gargantuan bank accounts of Big Tech, who have gone on a global office spending spree, including billion-dollar trophy buildings and even new mammoth leases in Silicon Valley. In the last three quarters of 2021, tech firms leased 76 percent more space nationally than they did in 2020, per CBRE, a flurry of leasing that brought them back to pre-pandemic levels of expansion.

“Overall, office leasing in the U.S. was up nearly 27 percent last year,” Manish Kashyap, CBRE global president of advisory and transaction services, said in a statement. “The tech industry is the big engine there.”

However, for smaller startups who rode a wave of record-high investment last year, the tightening of purse strings and the more conservative views of venture capitalists have begun to shrink their funding, and potentially these smaller startups’ real estate footprint, according to some analysts. This could have profound effects on an office market still struggling to adjust to flagging demand and reduced footprints overall.

It’s hard to feel bad for the tech industry, one of the best-performing sectors of the economy, and one which in many respects is still having a good, if not once-in-a-lifetime great, fundraising quarter. Investment in the first quarter hit $70.7 billion, the fifth-highest quarterly total in PitchBook’s database, coming down 35 percent from the fourth quarter 2021 record of $95.4 billion. It’s a slight break in what’s been called a constant, ​​up-and-to-the-right performance. But there are signs of waning confidence and conservatism.

PitchBook analysis also found that IPOs and exits of venture capital-backed startups have “neared a complete halt” during the first three months of 2022, with just $33.6 billion in exit value versus $192 billion over the entirety of 2021. Also, a recent report from PitchBook and the National Venture Capital Association noted that “deal sizes and valuations have begun to slow, however, as the companies closest to the public market see public valuations reflected on them as they look to raise capital.” Megadeals, defined as those of $100 million or more, shrank.

“We are seeing a softening in the venture market,” said Peter Walker, head of insights at Carta, a firm that due to its focus on capitalization table management and valuation software has data about roughly 28,000 companies and the state of the market. “We’re seeing lower invested capital, which does suggest a softening generally, especially late-stage rounds. Valuations are going down, but not too much. But VCs are being more picky and choosy about who they’re giving money to. Seems like everyone is a lot more cautious than they were just three months ago.”

Part of the shift can be seen in what Walker describes as a barbell effect to explain where funding is going. Investors are both excited by the latest thing, which is crypto, and the proven things, like Software as a Science (SaaS) firms and life sciences, with a great middle area seeing less focus. There’s also challenges in the burgeoning life sciences market as well; on a recent earnings call, Joel Marcus, CEO of Alexandria Life Sciences Equities, a major developer and investor in the space, suggested there’s a “have and have-not” division forming in the industry due to current market pressures, with larger, more successful firms with more commercialized tech hitting their stride while smaller firms struggle to attract attention and funding.

The new hesitation in the market means that firms may be hiring more slowly for the remainder of 2022, Walker suggested. He believes softening will continue for the next quarter at least, and potentially the rest of the year.

“I don’t think this is going to be wrapped up in June,” he said. “This is a lasting change that will take a couple quarters to shake out and see where everything falls.”

Historically, there’s been a tight connection between venture capital funding and employment in the tech industry, according to Colin Yasukochi, executive director of CBRE’s Tech Insights Center in San Francisco. But that’s not the only pressure on tech growth; hiring and expansion has been so robust in recent years that there’s a shortage of talent that’s holding firms back from adding headcount. It’s impacting the San Francisco Bay Area, Yasukochi said, due to the overreliance on tech in the regional economy.

Nick Slonek, Avison Young principal for Northern California, disagrees, arguing that he’s seeing relatively robust demand for space from small companies in San Francisco, even though downtown as a whole is struggling to rebound, and that the downturn hasn’t hit yet. Slonek is currently tracking 4.5 million square feet of demand, half of which he expects to transact this year.

“The demand may be lagging,” he said. “We’re not seeing the effects of funding downturns like this for a few months, even a year, afterwards. I can say with conviction we’re seeing demand from smaller firms and startups now.”

Carta’s market report suggests the number of employees working for early-stage startups has declined. In 2019 and 2020, a new firm that once averaged 25 to 30 employees would instead have 15 to 19. Even if funding does fully bounce back to recent highs, space needs won’t grow in kind, or likely hit the 200-square-feet-per-employee standard used pre-pandemic.

With tech representing 50 percent of the hiring growth in the nation during the pandemic, even though its companies represent roughly 20 percent of total employment, any slowdown would have an outsized impact at a time when office demand is already in flux, Yasukochi said. Kastle Systems, a security firm that tracks access swipes at office buildings in major markets, found that around 43 percent of space was occupied on any given weekday in late April.

“Going forward, there just won’t be the same ratio of space per new employee,” Yasukochi said. “It’s so fluid right now, and the industry has some growing pains, so it’s hard to get a sense of what’s happening. What it means for the office market is being redefined.”

Typical worries about COVID-19 and the overall economy could have some significant impact, of course, though as Slonek argues, without any more crisis or unseen setbacks, leasing could return to some kind of normal velocity in the fourth quarter of this year. Walker says he’ll be watching the Federal Reserve in terms of where rates are going, and is interested to see if more flagship VCs launch new funds (recent examples include powerhouse Andreessen Horowitz, which closed on a trio of funds in January totaling $9 billion). It’ll be a telling signal if they take a break to make bets on the money they’ve raised, or feel it’s time to raise more.

“It can be a statement of intent saying there’s lots of opportunity here,” said Walker. “Maybe they take this year to deploy in that opportunity space.”