The mayor also wants to lower day care costs for office workers to get them back in the workplace. There's one big catch, though. 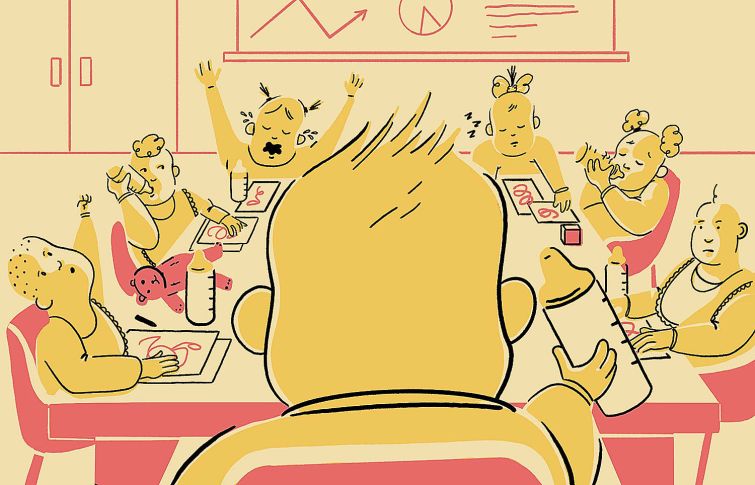 New York Mayor Eric Adams plans to use about $50 million to create a tax abatement and a tax credit program to increase the number of day care centers in the city and make care more affordable — hopefully getting parents back to the office alongside their babies.

While Adams expects the abatement and credit to create the thousands of new day care seats by converting office space to day cares and lowering the cost of care to employees, newly constructed child care centers may not arrive for at least a year, given the logistical challenge of converting offices into kid-friendly spaces. And both benefits are likely to run into one major problem: a shortage of child care workers.

“From our perspective, incentivizing the creation of new child care facilities and seats is a good thing,” Maya Kurien, the Real Estate Board of New York’s (REBNY) vice president of policy and planning, said. “Financing a center doesn’t mean you’re going to have a child care center tomorrow, because those retrofits are going to take time.”

Adams estimated that the employer tax credit could create up to 6,600 new seats for children and that tax abatement–funded renovations could open 11,000 additional seats in New York City. The funding for the two programs comes from tax revenue the city will give up to allow for the benefit, according to the city. At the same time, New York City will expand the availability of child care subsidies to low-income families with $4 billion Albany lawmakers allocated to the city for child care in the latest state budget.

New York City, home to an estimated 500,000 children 5 years old or younger, is in desperate need of child care. The impact from a lack of child care has been particularly felt by the city’s mothers, 41 percent of whom are not working compared to 24 percent of the city’s fathers, according to a report from the nonprofit Citizens’ Committee for Children.

Statewide, at least 1,500 child care programs closed between April 2020 and June 2021 — most of which were owned by women or minorities as the state delayed distributing federal coronavirus relief funds. Child care deserts — areas without enough day care slots to serve the children living there — are also prevalent in upstate New York. Nationally, providers have struggled to hire child care workers after about 360,000 child- care jobs were eliminated because of initial pandemic-caused shutdowns in 2020.

Enter Adams, with a private sector solution: a $25 million property tax abatement program for eligible landlords to build their own day cares. The program is two-tiered, with eligible buildings in child care deserts getting more money than buildings in areas with enough care.

But landlords have been quiet on the issue. Thor Equities, Silverstein Properties, Tishman Speyer, RXR and Rudin Management Company declined to comment, and Vornado Realty Trust and Related Companies did not respond to requests for comment on whether the firms would take advantage of the program. A spokesperson for the Durst Organization said the landlord hadn’t looked at the program but supports access to child care generally.

The tax abatement program is broken down into two tiers. New York City will offer a tax abatement for reasonable construction costs of up to $75 per square foot, or up to $225,000 total, for buildings in child care deserts identified by the state’s Office of Children and Family Services (OCFS), and $35 per square foot, or up to $100,000 in total, for other properties, according to the city and the OCFS. The abatement is distributed over the five-year period of the budget, so a landlord with an eligible property in a child care desert could snag $15 per square foot for five years.

But those centers could take more than a year to build. First, to gain approval to convert office space to day care space, a landlord would have to check with a variety of city agencies — namely the Department of Buildings (DOB), the New York Fire Department and potentially the Landmarks and Preservation Commission (if the building is landmarked), said Frances Graham, senior managing director of the Northeast and a project manager for Newmark. The DOB can take anywhere from a week to a month to review an application, according to the agency.

The DOB would need to approve converting an office to day care space, and issue an ALT-CO permit — a document that lets a landlord renovate a space for a new use, which would also require a new certificate of occupancy. The DOB would then inspect the new facility based on the number of changes a landlord made, according to a spokesperson for the city agency.

Next up is the six-month-or-so design and development phase of the project, during which an architecture firm would plan the space’s layout and mechanicals. After that, construction could take nine months to a year to complete, putting the entire timeline at 18 months, plus the city approval process, said Graham. Those construction costs — including building additional exits, bathroom renovations, fire alarm systems and more — would be included in the city benefit, per a city spokesperson.

Prior to her work at Newmark, Graham worked on a similar conversion, transforming an office building into an Upper West Side school. The entire construction process took between nine months and a year, and included installing smaller toilets and sinks, replacing interior glass doors with metal locking ones, and installing a double-door entrance system to let school staff securely buzz students in and out of the building.

While the process would take more than a year, Graham sees the day care program as potentially very valuable to working parents.

“My daughter was in day care from when she was 6 months old because I had to go back to work, and it was very helpful that there were good day cares around,” Graham said. ”I think it’s a great opportunity for people … so that they feel more comfortable going back to work.”

But the lengthy conversion process doesn’t bode well for a speedy return to the office, something Adams has prioritized. Property owners would also have to hire workers to operate a day care center or contract a provider to do so, potentially running into the same problem established child care centers face: a shortage of workers.

About 460,000 families across the U.S. lack adequate child care, and the industry as a whole lost about a third of its workforce at the start of the pandemic, according to a Wells Fargo analysis. A lack of child care also may be impacting the so-called “great resignation” — roughly half of workers who quit their jobs last year cited child care issues as a reason why they quit, according to a Pew Research Center survey.

“Child care centers have closed across the country, and that has made it hard for people to come back to work in offices,” Kurien of REBNY said. “There are a number of different things that would have to go into actually making these centers possible. But an incentive that helps with the cost of that is a good thing.”

With day care positions offering little job stability and a median hourly pay of $12 per hour, employees might not be jumping at the chance to work for less than the minimum wage available at the average Starbucks.

“The tax abatement is a great idea [and] the conversion of office space to day care space is great, but we need the caregivers — and they need to be able to make a living being a caregiver,” said Leah Hartman, the department chair for accounting, finance and marketing at the University of New Haven.

The United States suffered from a shortage of child care workers before the pandemic, although the lack of staff became particularly pronounced as centers closed, laid off employees or reduced the number of children admitted thanks to pandemic-related social-distancing requirements, Hartman added.

Landlords and other businesses could skip the regulatory hoops of the abatement program and go right for the business income tax credit Adams is also proposing, although it too could face labor challenges. The tax credit, funded with $25 million in forgone city tax revenue, would give a business money for providing free or subsidized child care to its employees. To qualify for a subsidy, a business must charge employees no more than 40 percent of the market rate for child care, which the OCFS determines.

A maximum of 25 children of employees at any business can be counted toward the credit, limiting the program’s impact for large companies. The benefit is calculated based on a child’s age, so that 20 percent of the total annual cost of placing an infant or toddler in a day care can be claimed as a credit against business taxes. Businesses must partner with a permitted child care service provider to be eligible, according to the city.

City parents would benefit from more state aid, as the state budget also increases the availability of child care subsidies to families to help ease the burden of care, which can cost anywhere from $10,000 to $20,000 per child each year. The proposed budget would make families with an income of around $83,000 eligible for subsidies, as opposed to the previous $53,000 cap for a family of four — adding an estimated 100,000 eligible children, per the budget. (Notably, children who are undocumented will not be eligible for subsidized care in the budget, leaving out about 5,000 children across the state.)

Gov. Kathy Hochul’s budget also includes $343 million in stabilization grants to providers of child care to cover the cost of operating during the pandemic, and the state is expected to change how it calculates reimbursement rates to allow providers to pay their employees more. Paying employees more money, or providing them with other incentives to stay in the child care field, may prove more crucial than the need for day care space, Hartman said.

“[It is] fantastic that an employer is going to be able to more cost-effectively offer space, but you still have to have the people to run it — and preferably trained people,” Hartman said. “During COVID-19 we’ve asked a lot of them to put their lives on the line … They were front-line responders and were getting paid $13 an hour.”

Update: This article has been updated to indicate that New York City will offer the tax abatement, not the Office of Children and Family Services.