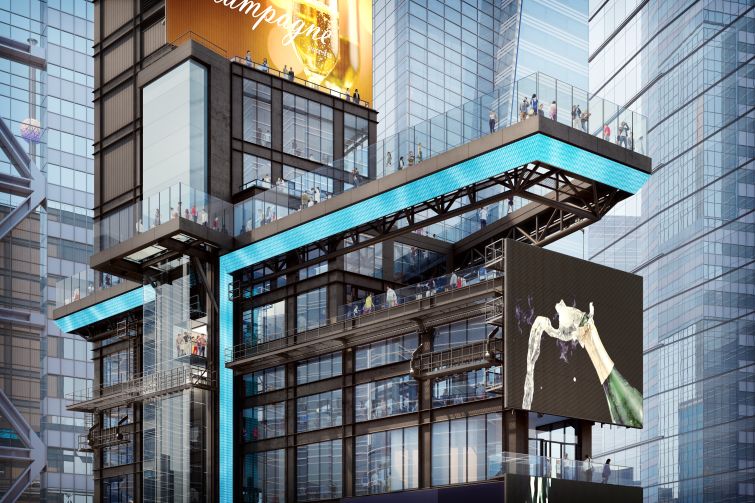 A rendering of the One Times Square viewing deck. Photo: Jamestown

Jamestown has snagged $425 million in debt from JPMorgan Chase to refinance its existing loans on sign-studded One Times Square — home to the New Year’s Eve ball drop — and renovate the 25-story tower, according to public records and a source close to the deal.

The financing covers most of the $500 million that Jamestown plans to spend revamping the 118-year-old building to open 12 new floors to the public, install a rooftop viewing deck and integrate virtual and augmented reality experiences into the property, Commercial Observer previously reported.

The largest portion of the loan — about $208 million — refinances previous CMBS debt from Westdeutsche ImmobilienBank, Goldman Sachs and Deutsche Bank dating back to Jamestown’s original acquisition loan in 1997, according to public records and a source familiar with the deal.

Jamestown also snagged an $88.7 million building loan and a $39.8 million project loan — which will likely help fund the 27-month construction process renovating the interior and exterior of the property, CO reported. The tower, at the intersection of 42nd Street, Seventh Avenue and Broadway, will keep its iconic advertising signs turned on during the renovation, intended to make One Times Square more similar to its metaverse counterpart in the online world of Decentraland.

Eastdil Secured’s Grant Frankel, Tanner McNeill and Ethan Pond brokered the financing, sources said. Eastdil declined to comment. Jamestown confirmed the loan but declined to comment further, and JPMorgan did not respond to a request for comment.